This year's International Congress on Medieval Studies (or Kzoo 2014) was a vortex, Karl has it right. Now that la bufera infernal has stopped its spinning, here are a few memories from that gyre. 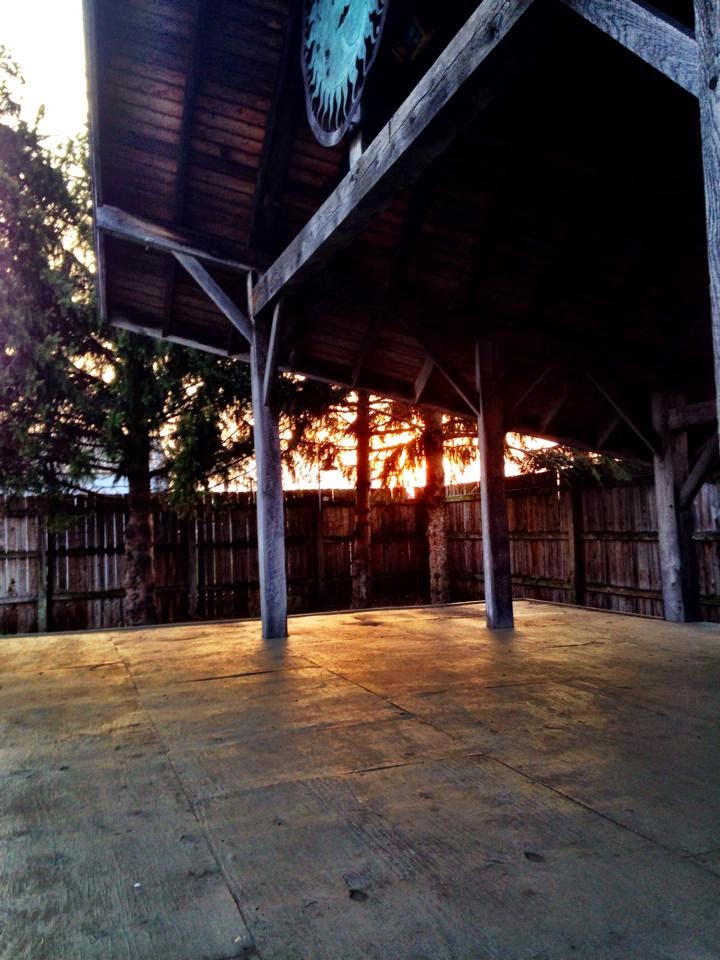 I was a little worried about the Rogue Session of Impossible Words. The brewery at which we gathered was noisy. Many more people arrive than I expected to witness its unfolding (I thought we'd have seven or eight interested onlookers, but we had 47 by my quick count). The night was warm and the sun just beginning to set, so we decided to go outside and see if we could pull off the session in the new garden at Bells.
We found a stage awaiting us. A sign told us what not to do, but rogues ignore imperatives, especially when waning sunlight and noisy birds from a nearby pine are conspiring to render the evening perfect. 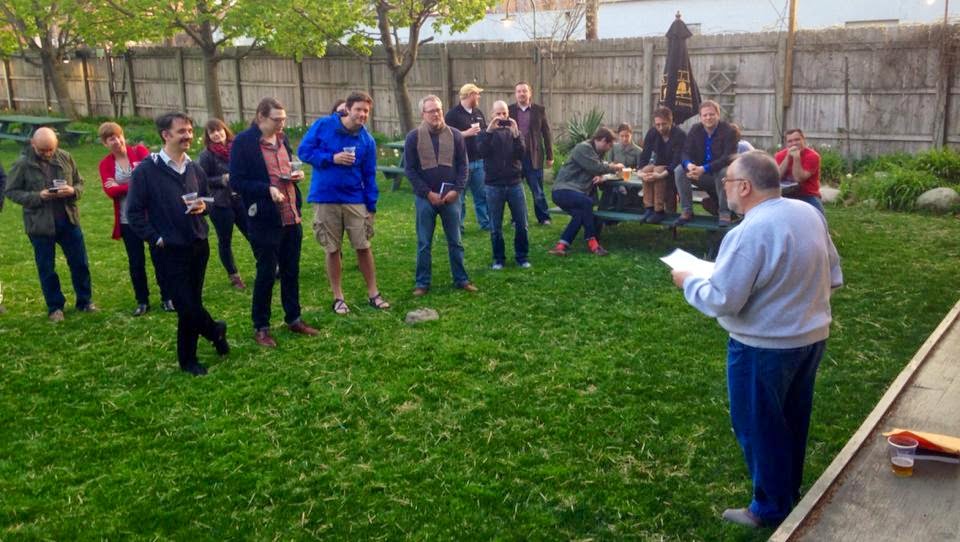 We began with a Rogue's Benediction courtesy of the master rogue, Michael O'Rourke. Then Marty started us out movingly with the complications of that most desired of cities, JERUSALEM. 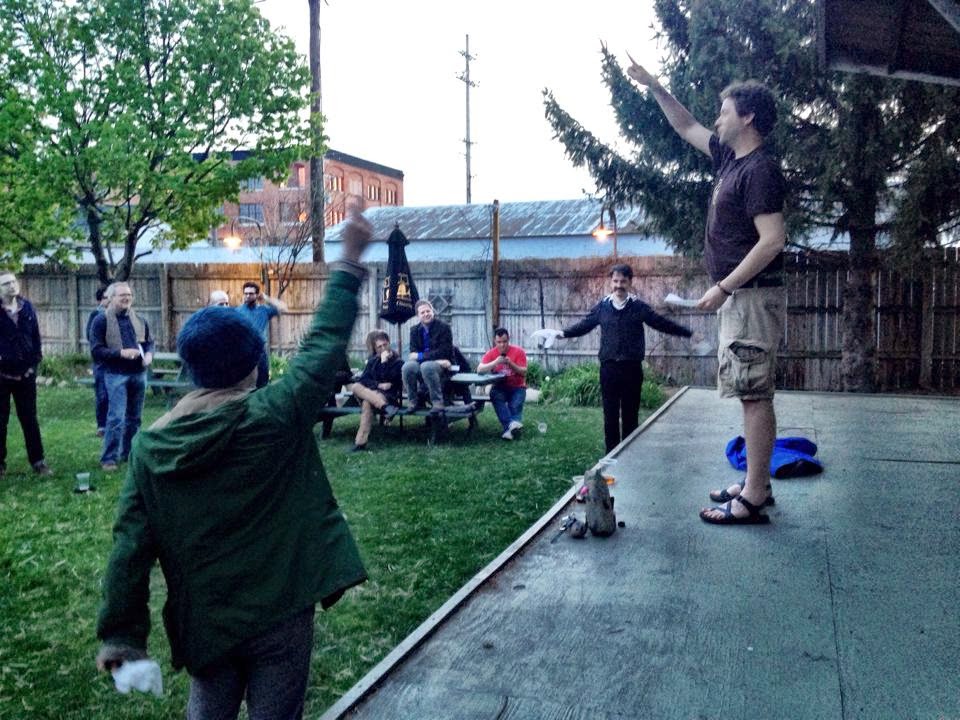 Lowell proved that PEACE is not impossible by asking two volunteers to embody its kinetic sign (and linking that sign intimately to activism). 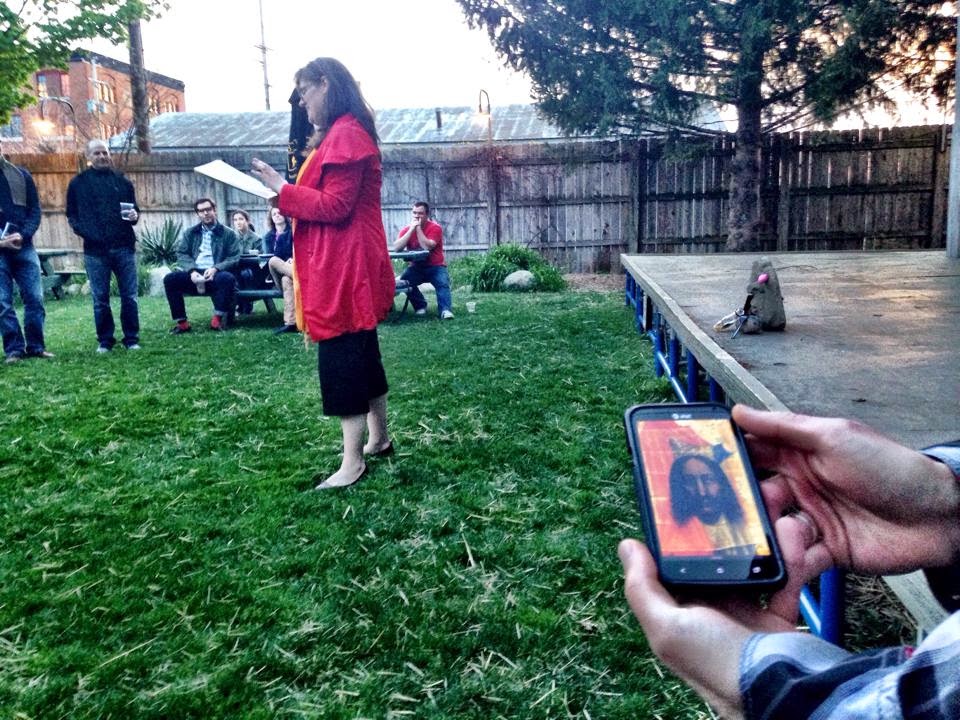 Anne verbed GOSSAMER and made us realize a connectedness at once ephemeral and beautiful. 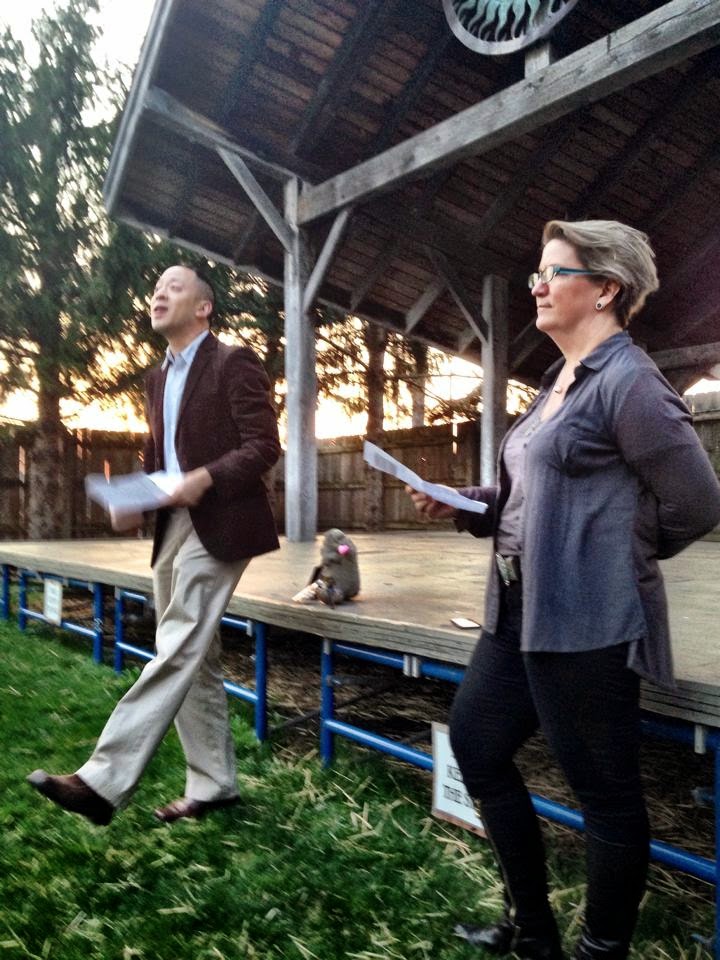 With some help from a random volunteer, Jonathan brought us BEYOND in several languages. Eileen gave it all her HEART. During Jonathan's performance the noisy birds in the nearby pine grew quiet, erupting back into sonic merriment once the piece ended. 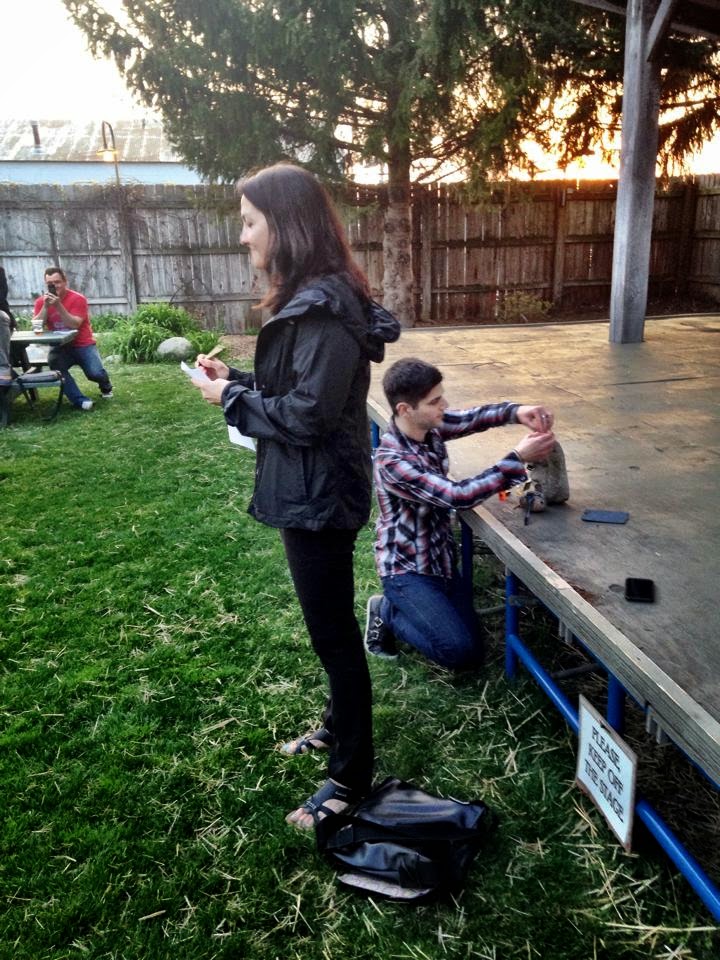 Lara made arresting sense of NONSENSE. Alan created a FOUND work of art from fragments we brought to the event. 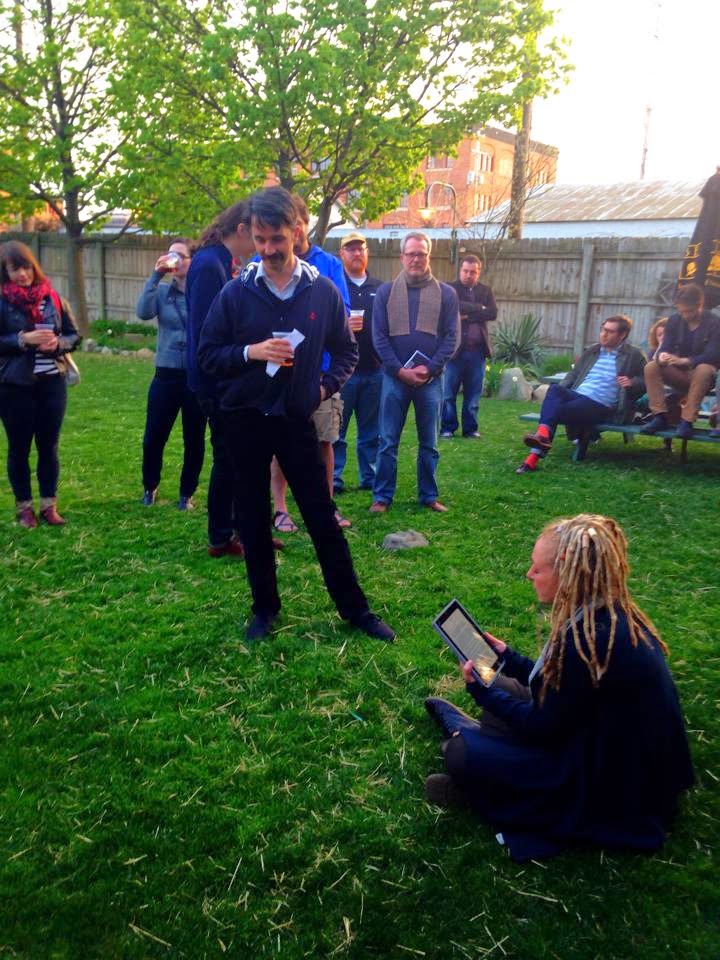 Karen taught us how, impossibly, to BREATHE. I stood behind, taking pictures, marveling that we had this time together, on an evening so full of vitality and yet STILL (motionless, but also intensified -- an adjective, verb, and noun). 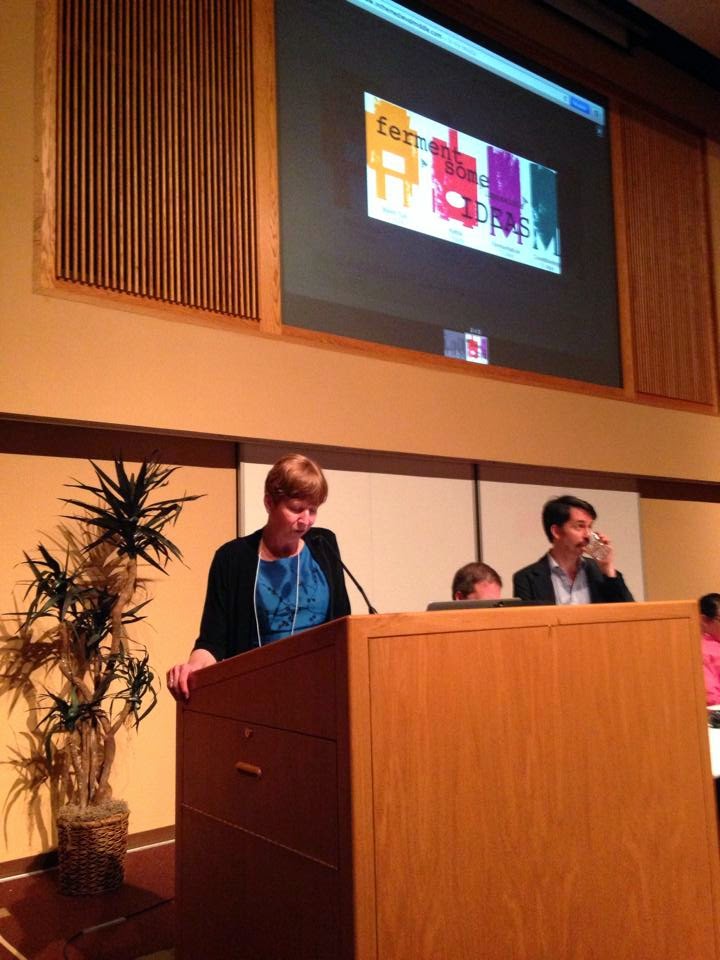 The official session the next morning was every shade of wonderful. Some fragments: BLISS as an infusion of being as well as a theological colonization of joy (Randy Schiff); places can survive when human settlements do not, so that SURVIVAL is enwrapped in a plural physics, a tale of migration (Dan Remein); an afterlife tells us that our actions have consequences beyond human calculability, beyond SATISFACTION, a knowledge that resonates with ecology's inhumanism (Karl Steel); within the "I" might be excavated a humble flicker of multiplicity to hold onto (Chris Piuma); TOLERANCE operates at every scale and within every discipline (from cancer to justice to botany) and exceeds them, as supplement (Laurie Finke); COMMUNITY is impossibly built of a with (cum-) and an obligation (-munus), we are incapable of paying the debt of distance from self that community demands, and yet a kind of infinite perishing shows another way (George Edmondson); if we are not gobsmacked, then who are we as a COLLECTIVE (Anne Harris)? The Q&A were fantastic, and a topic for next year's roundtable even spontaneously emerged, "Lost Words." 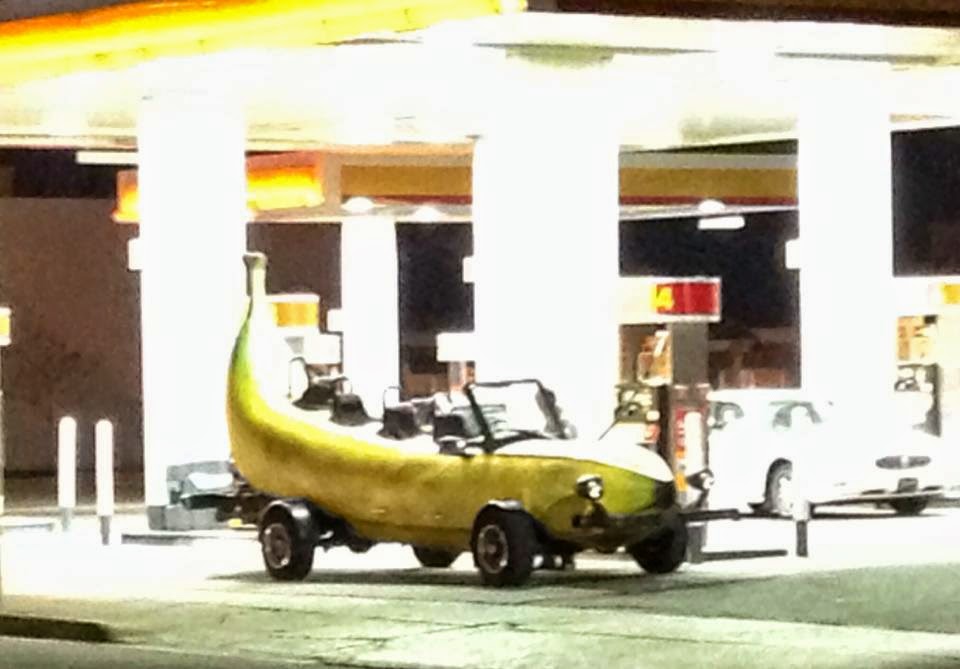 Many other transports unfolded at the Congress, though none of them by this Banana Car witnessed by many of us (I photographed it from the brewery across the street and thought "It runs on gas, not biodiesel or photosynthesis??!"). Among the conference highlights: a tremendously good Ecocriticism panel organized by Heide Estes; an absolutely superb punctuation panel put together by Rick Godden that turned out to be quite an exploration of affect; several linked panels on affect and emotion overseen by Stephanie Downes, Stephanie Trigg, Tom Prendergast, and Mary Flannery (among many others); and Kate Ellis's excellent worldmaking roundtable. Much eating, drinking and conviviality also occurred, typically into those hours when night has given up and become morning. I would love to give a fuller account of everything that unfolded in the Kzoo vortex, but I am still sleep deprived and I have about 1000 ignored emails to answer. So I will end by saying: thank you, everyone, who was part of this conference in any way. It was impossibly good.