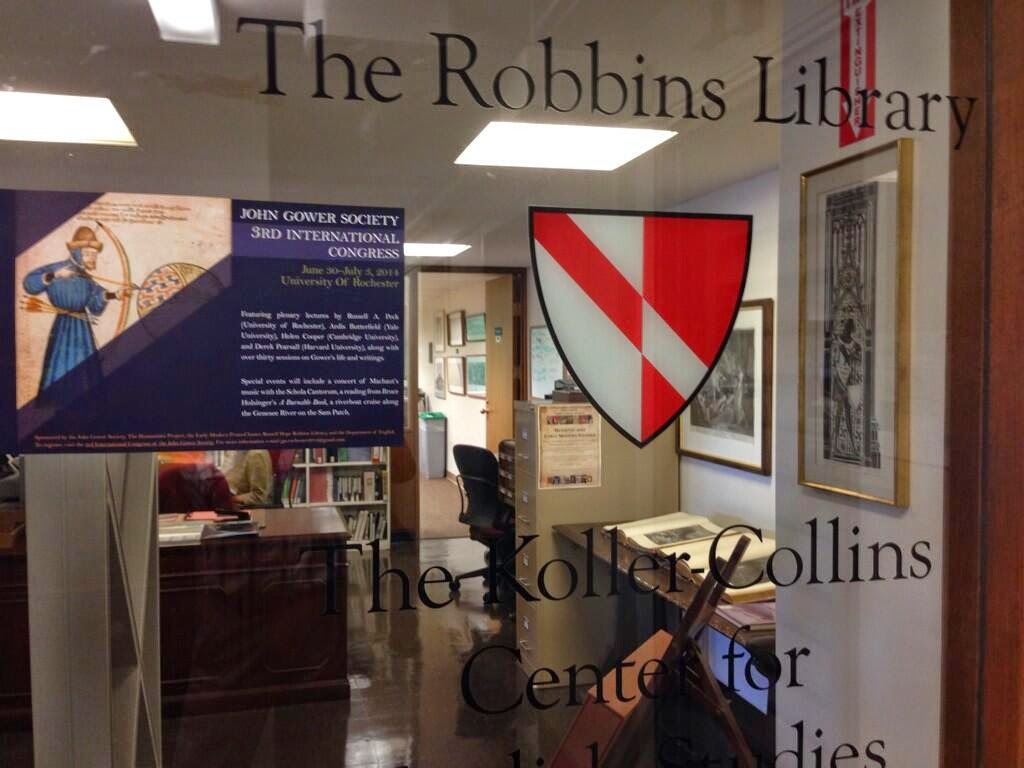 Just got back from "Gower-fest" (Third International Congress of the John Gower Society) at the University of Rochester...and I'm already busily getting things in order for #NCS14 (Nineteenth Biennial International Congress of the New Chaucer Society in Reykjavik, Iceland). I'm pleased to be participating in Global Chaucers activities at NCS (note the international roundtable organized by Candace Barrington, and Thursday night's polyglot reading of Chaucer's works). I'm also co-directing the "Reorienting Disability" Seminar with Julie Orlemanski (on Friday; find out more about the participants and activities on the seminar blog), and looking forward to taking part in Saturday afternoon's "Things Books Do" session [Roundtable 10A] organized by the bibliographical-theoretical dream team of Alexandra Gillespie and J. Allan Mitchell.

The theme for this year's conference was LANGUAGE, COGNITION, PERFORMANCE.

These keywords did not disappoint! To give you some flavor of what transpired throughout the conference, check out the Storify selection of Gowerian live-tweets (via M Bychowski's Transliterature blog). This archive reveals some of the more social/convivial aspects of the conference and also tracks a few threads that emerged across the panels regarding themes of disability, pedagogy, and theory. Other thoughts:

Vibrant threads. I was impressed by the number interrelated panel sessions that created de facto "threads" throughout this conference, particularly a number of sessions on science and medicine; and several panels exploring interactions between law and literature.
Many voices. Established figures in the field were active participants throughout the week (the conference was very much a tribute to Russell Peck with plenaries by Ardis Butterfield, Helen Cooper, and Derek Perasall) -- and I was pleased to encounter so many new faces at the conference as well. Jeff Stoyanoff observes in his aptly-named new blog Ernest & Game that this particular conference fostered an ethos of welcome: Gowerian "luminaries" and self-identified "young scholars" could be found all over Rochester commingling over drinks in local bars (or inns or hipster pubs) or chatting while on a boat. 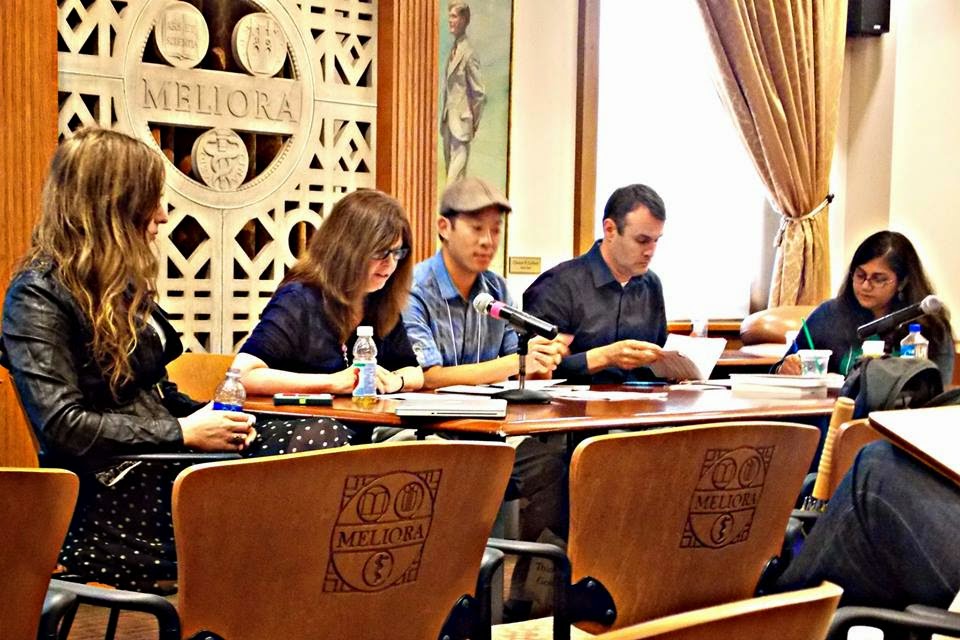 Theory and ethics. One highlight for me was taking part in the conference's concluding session on "Gower and Theory" -- in some respects, the presentations at this roundtable (in order of presentation: Queer Gower, Material Gower, Multilingual Gower, Sensory Gower, and Crip Gower) began to interweave a few conceptual strands emergent throughout the conference. I'm a big fan of the roundtable format (shorter presentations = more participants and more time for discussion), and our approaches intersected in unexpected ways. Eve and Shyama reminded us that instead of constructing a grand master-narrative (bibliographical or monolingual) we can start thinking more about the messy complexity of local contexts. My own presentation stressed an activist-oriented approach to disability and its implications for Gower's lived blindness, and Allan offered some thoughts on historicizing the under-theorized medieval senses of taste and smell; we discovered in the discussion afterwards that our presentations might suggest a two-pronged approach to the sensorium in Gower's Confessio: his tales can work against implicit hierarchies of sense perception that privilege the visual and auditory.

In their own ways, all of these presentations showed how scholars can more deliberately consider the ethical and political stakes in our respective approaches to Gower's works. Rather than providing my own thoughts on this, read Jeff Stoyanoff's beautiful reflections on M's "Queer Gower" presentation. How do our own identities (political or otherwise) inform our perspectives on Gower and shape our interactions in the classroom? It is perhaps fitting that the theory roundtable followed directly after an inspiring session on teaching Gower in diverse environments: Ben Ambler, on teaching Gower in a multiethnic and times politically conservative environment; Jerome Denno, on teaching Gowerian monstrosity to seminarians through the monster theses of JEFFREY (who received a few shout-outs in different sessions as a former University of Rochester undergrad); Jenny Boyar, on Gower in the medical humanities classroom; and Adin Lears, on Gower's work as venue for thinking close about the relationship between poetry, sound, embodied performance. 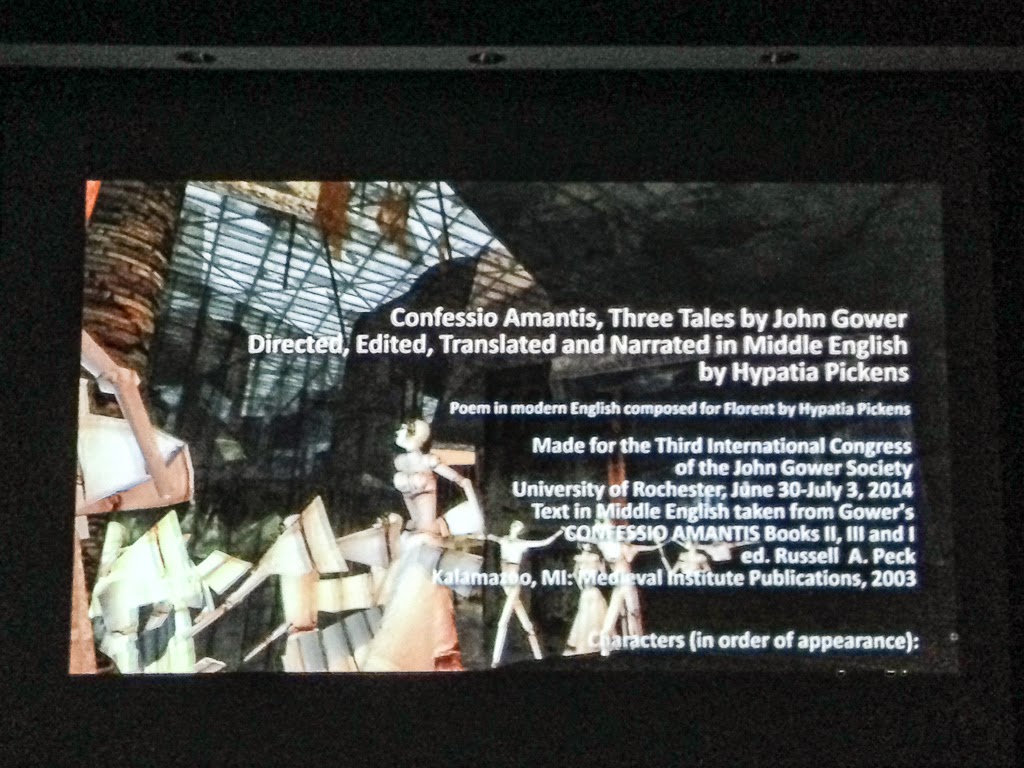 New media. This conference really drove home to me how Gower's work can animate a surprising range of digital and multimedia endeavors. A session organized by The Gower Project offered updates on its open-access journal Accessus: A Journal of Premodern Literature and New Media, its ongoing bibliography of Gower studies, translation Wiki (with potential for use in classrooms), crowd-sourcing transcriptions of Confesssio manuscripts, and Serina Patterson's medieval astronomy app. Such efforts augment resources already available through the Gower Bibliography and International John Gower Society website. Performance studies infused the conference as well: a session on Gower in Shakespeare's Pericles; a stellar performance of music by Guillaume de Machaut; and Sarah Higley showed her beguiling "machinima" 3D film adaptations of tales from the Confessio created by recording real-time performances by Second Life avatar-actors. The conference also featured live readings and broadcast recordings of Gower's work as originally composed in Middle English and French as well as the English Confessio's late-medieval translations into Portuguese and Spanish.

Multilingual and transnational. If you're someone who loves to think and talk about the interplay between different languages, Gower's trilingual oeuvre offers an embarrassment of riches. In addition to vibrant papers and sessions expanding Gower's participation in Anglo-French contexts (or as Elizaveta Strakhov encourages us to call them, "cross-Channel" relations), this conference demonstrated that we are only beginning to understand how Gower's work offered new insights into medieval Anglo-Iberian relations as well. The whole "Gower and Iberia" subfield really emerged in full force in the 2011 Gower conference in Valladolid and this area of Gower studies has gained more prominence with recent essay collections (England and Iberia in the Middle Ages, ed. María Bullón-Fernández [2007]; John Gower in England and Iberia, eds. Ana Saéz-Hidalgo and R.F. Yeager [2014]).

I end with two exciting items of Gowerian news. 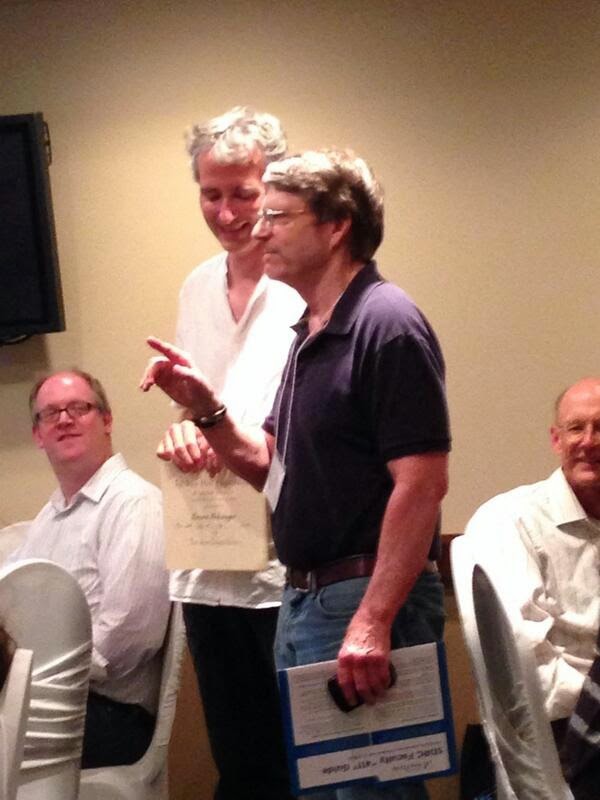 Bruce Holsinger (most recently of Burnable Books fame) was awarded the John Gower Society's John Hurt Fisher Prize for his outstanding contributions to the field of Gower studies this year. If you haven't read (or heard or otherwise experienced) his novel A Burnable Book (2013) -- starring John Gower as detective-protogonist -- it's definitely worth your time; see also his website's sexy resources on life in late-medieval London.

Sebastian Sobecki delivered a talk at #WritBrit2014 (biennial conference Writing Britain 500-1500; see this year's Storify feed) that identifies John Gower's autograph hand in two important manuscripts. (In a case of cosmic irony, Sobecki's talk took place in Cambridge, UK, while the Gower conference was happening in Rochester -- so I think many Gowerians missed this bit of news.) Rest assured, more on this is forthcoming in an article in Speculum.

All in all, it's a VERY exciting time to be a Gowerian.

Looking forward to putting on my "Chaucer hat" at NCS!

The text of M Bychowski's presentation on Gower's Narcissus myth and politics of trans suicide has been posted on her blog; M's "#Gower tweets" and "#Queer Gower" blog posts are (as of today) displaying on the Aequalitas news site ("Science" page).
Posted by Jonathan Hsy at 8:57 AM