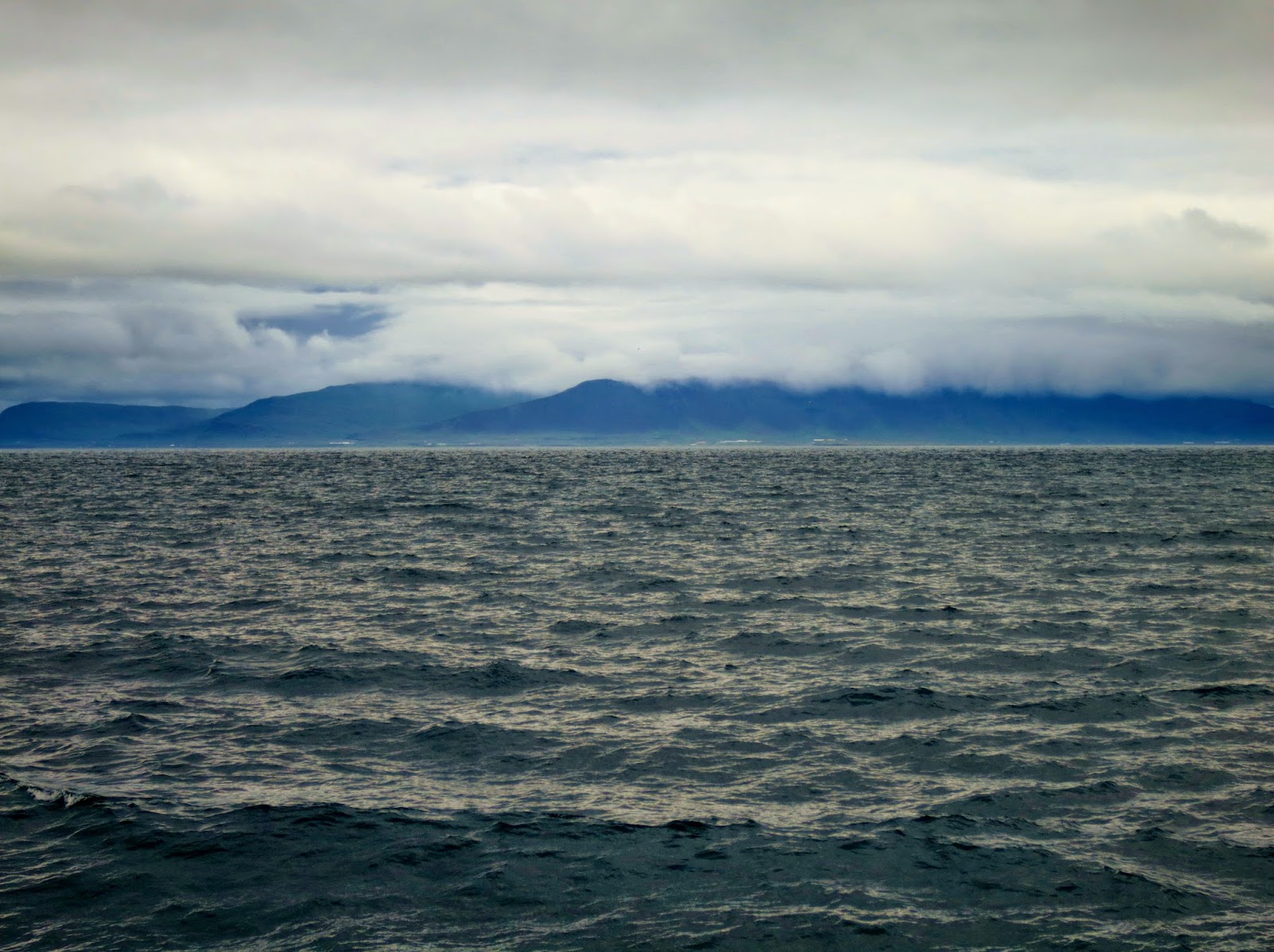 I'm in Iceland for the New Chaucer Society Conference. Today's papers concluded with a whale watch, expressly framed by the excursion group as a strike against Iceland's commercial whaling. Currently only 4 other countries commercially whale: Iceland, Norway, Japan, and the Faroe Islands. As we heard, whaling is not some ancient Icelandic tradition, but rather dates only to the introduction of the harpoon gun, by a Norwegian, and the expansion of Norwegian and English whalers into Icelandic waters. After a ban in the early 20th century, whaling resumes in earnest shortly after WWII, and now, only some 3% of Icelanders eat whale regularly; the whale meat of Iceland, rather, serves Japan and tourists, who eat it, thinking that they're participating in heritage, like others, dripping with blood. We were encouraged to seek out restaurants displaying a BLUE WHALE STICKER, as these are explicitly whale friendly. I extend the same encouragement to you.
As the tour company itself reports, the whale watch wasn't a straightforward success. We saw a number of animals. From their list: Atlantic Puffin, Northern Fulmar, Northern Gannet, Storm Petrel, Kittiwake, Common Guillemot, Black Guillemot, Eider Duck, Lesser Black-Backed Gull, Manx Shearwater., Arctic skua, Great skua [terrible birds that live by theft!], and a couple pods of White-Beaked Dolphins. No cetaceans bigger than a dolphin, though: no Minke Whales and certainly no Orcas.
But, again, as the tour company explained, we were watching whales do what whales do, which sometimes  means not showing up for us at all. We knew the whales were out there; and we knew they were whales, for themselves, and not whales for us, when they didn't show themselves for us. This, then, was a whale watch better than most, because it forced us to a better, truer engagement with whales than the bay-as-menagerie or reservation.
Attendees at the ecomaterialism session earlier in the day agonized a bit over the withdrawn object of some strains of speculative materialism. Well, here's one model of the withdrawn object, present to us only in its absence, antipathy, or avoidance, but not removed from our ethical concern for all that. Because we should know that the whales are out there, even if not simply available to us, and, if we're doing things right, we should defend their right to keep themselves hidden from us, who are, so often, especially in Iceland, their destroyers.
(h/t Asa Mittman for the title)
Posted by medievalkarl at 5:01 PM