1.
Dispatch from the front lines of BABEL. Read the post. Support the movement.

2.
Sitting in a coffee shop while daughter is at Hebrew school. I'm just back from a few days in Dallas, where I was welcomed into a rare kind of intellectual community: a gathering of undergraduates, grad students, and professors into difficult conversation, the humanities at their best. This vibrant collective owes everything to Jeremy DuQuesnay Adams and Bonnie Wheeler, and the open doors of their home.

3.
Bonnie and Jeremy are the sweetest couple. Being with them for two intense days made me feel a part of the kind of family I dreamt about as a child, where love is palpable and intellect and humor are hard to tell apart. I always thought college would be like this, but had quietly given up on that kind of gathering until I visited SMU. I hope Bonnie and Jeremy won't mind my sharing this picture from my time with them. The image is blurred because I could not resist breathing awwww as I took the shot, and thereby accidentally moved my hand. 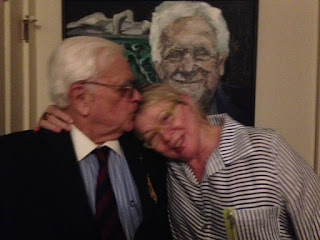 4.
In another photo of Bonnie, displayed in her hallway, she stands in a white dress with long flowing hair and amazing white glasses. Both her hands are upraised: she fills the frame and makes it clear no one will pass her. She is wearing a white shawl and appears as a beautiful yet absolutely commanding Flower Child. I love the image for what it conveys about Bonnie's spirit. Here is what I once wrote about Bonnie:

The photo was taken at a time in the academy when people like Bonnie were so necessary ... and yet persecuted for not conforming to a severely limited academic type (especially for women). Bonnie has searing stories to narrate about medieval studies when she entered the field, but I can summarize their moral: the field is a far better place for women -- for everyone -- because of the shit she challenged and refused to repeat. The feminist fierceness of Bonnie's generation must never be forgotten (even as its focus, assumptions and aims have been, of necessity, widened). Nor should the hostility of the academy towards those who pushed against its status quo. That panic when the academic status quo is threatened continues.

5.
During an afternoon tea that gathered the community in Jeremy and Bonnie's home, we had a wide ranging conversation about micro-aggressions and the "feel" of college campuses. Some people did not know what micro-aggressions are, others saw their invocation as a threat to free speech, but everyone -- even when anger bubbled -- listened with patience, took time thinking through uncomfortable realizations. Bonnie spoke eloquently about the dangers of the forced choice of thinking that college is either a space of challenge or a safe home (it is both). She also spoke about how second wave feminism accomplished its activism, emphasizing the importance of consciousness raising and the face to face encounter.

6.
The previous day I gave a talk to an energetic audience about Noah's ark and the stories we tell about climate change. The first question was about Levinas and the faces of the dead animals in the manuscript illustrations I showed. The question took a little while to be formulated, and some people in the audience became impatient, but it can take time to get things right, to be clear and complex at once. The humanities are not so great at providing answers, at least not easy answers. Yet they excel at teaching us to ask better questions. That takes some fumbling, some time, some willingness to stay with someone as they figure things out.

7.
I left the tea briefly to chat with a graduate student about her thesis project. When I came back, everyone had gone upstairs to watch the news and behold in helpless fascination the attacks in Paris. A concert, a soccer game, restaurants and cafés. The terrorism had targeted the young.

8.
Earlier in the day I'd visited the Texas School Book Depository where Lee Harvey Oswald built his sniper's nest. The exhibit there is good, and thorough, emphasizing what JFK accomplished -- as well as how many groups hated him for it (one reason conspiracy theories flourished immediately is that so many wanted him dead). The Peace Corps, the NEH, the NEA, the space program, expansion of voting rights, integration of public schools, and the formulation of a comprehensive federal civil rights bill are all his: art with science, humanities with being humane, an emphasis throughout on making the nation better for all who follow even if that means triggering massive discomfort and challenging the status quo. It's sad to think that 50 years later so much of the social justice movement put into place by Kennedy -- and his valuing of the arts and humanities -- have been eroded rather than intensified. A pillage economy has replaced a push for shared equality, gun rights over civil rights, plush retirement accounts for some rather than economic justice for all. It is very difficult to be young right now. When I look at the future imagined in 1963 and the one we live with at the moment, I wonder how we learned to be OK with its attenuation.

9.
Except not everyone in that "we" is OK with constrictions of possibility. I place great hope that student protests at Missouri, Georgetown, Yale and elsewhere are getting things right. The generations that preceded them convinced themselves to perpetuate an economy, a justice system, a world of arts and humanities and science that gets so many things wrong -- that passes along a small future, modes of thriving reserved for a privileged few, instead of opening doors wider, increasing access, imagining the world otherwise.

How did anyone come to believe that a valid assessment for any particular course of college study (say, in English or History versus Computer Science) is how much money those holding a credential earn in the course of a career? According to this metric, embraced by both US parties, the more money you earn the more highly your degree is to be ranked as effective. It's that blunt. Screw such appraisal and the assumptions that came with it. Any philosophy major can tell you that the correlation between lifetime salary and lifetime happiness is not one to one. Beyond a certain minimum threshold that enables a person to obtain the food, shelter and comforts of a modest life [a minimum that ALL people merit], more money does not yield more satisfaction with one's life. Nor is a life with tremendous cash flow and a well stocked retirement portfolio a life better lived. I hope more universities and colleges pressure those who would "run a university like a tech company" (as Timothy M. Wolfe disastrously promised to do at the University of Missouri) to realize that they need to sign up for a remedial course of education in the liberal arts, where they might learn a little better what institutions of higher education at their best accomplish.

11.
What if a reply to terror were art? What if an answer to violence were acts of imagining a world otherwise? What if in response to hatred we refused the invitation to hate?

12.
Here's an old piece I wrote about Paris and complicated histories of race and violence. I was thinking about that blog post recently because it's included as an excursus in my most recent book and I was asked to comment on it during a graduate seminar at SMU where the students had read Stone. I declined. Oddly I cannot talk about the piece without tearing up, even after all this time, and I just did not want to have to wipe at my eyes during that conversation. The violence in Paris happened the next day and I sat with the same people glued to a TV set in Dallas watching images in horror and welling up.

13.
I believe that the Zombie Apocalypse arrived long ago, in the form of a small number of well educated, mainly white and affluent Americans who consumed as much as they could grab and gave futurity little thought. They negated or reversed so much of what seemed possible in 1963 and 1968, so much of that vision of a more just future. Their gated communities (a version of Noah's ark) now exclude those who are not thriving. They have seized control of many universities (among so many other things). They do not ask: how can we expand access? How can we open doors in welcome, rather than construct such massive walls? They did not follow the path that Jeremy and Bonnie, social activists both, insisted was the groundwork of more capacious and more equitable community. They turned away from the utopian visions many of them had embraced when they were younger.

Utopia does not vanish when it is no longer by one generation dreamt. Young people -- including my students, current and former -- are much smarter than some of these ark-dwellers suppose. Today's young will not long remain complacent or compliant. I believe they will refuse the legacies of racism, misogyny, rampant militarism, economic disparity, environmental injustice and homophobia being handed them as if natural or inevitable or the way things simply are.

I revere the visions of a more just, more equal nation that are a rightful inheritance, a world for which so many have for so long labored.  I have great faith in the future a new generation of young activists will make.