Animals, Gesture, and Communication Despite it All

It's the week before Kalamazoo, so of course I've just drafted my New Chaucer Society Paper.

Yeah. So, as I'm in Berlin, I'll simply wave fondly at Kalamazoo from a distance, and as I have more stuff to write during what remains of this chunk of my sabbatical -- one thing being a chapter on medieval animals and disability -- I need to get my stuff coherent, and fast! Last week was muteness (and thank you, hugely, everyone who helped me out on twitter and so on with ideas!); this week, it's gesture, which is as new to me as muteness was last week. And next week, well, I'll simply watch what trouble you all get into at the Big Show. And wish all the mentors and mentees a charming, helpful encounter!

And OH MY GOODNESS: as I was writing this, Jonathan Hsy was posting a BABEL events at Kzoo 2016 post. READ THAT. Use it. Mark your calendars. Do that. First.


Read on if you like! Or just finish your grading.

Now, not every iota of Cuthbert hagiography tells the story: it's not in Bede's Historia Ecclesiastica, nor in Alcuin's Bishops, Kings, and Saints of York, the metrical Cuthbert calendar, or the twelfth-century Cuthbert writings of Symeon and Reginald of Durham. The story's illustrated several times, most famously in Yates Thompson 26, and while these illustrations really do look like birds, they're even slimmer peg to hang an interpretation on than the texts I've offered you. I'll simply say that the story's not quite told everywhere, but it's still common, and where it exists, it is remarkably consistent.

I acknowledge as well that exegetical ravens are thickly symbolic, and I acknowledge that medieval commentators often agree with Dominic Alexander in taking stories like this as a sign of a saintly return to prelapsarian mastery over the animal world. I likewise acknowledge that this unique feature of the Cuthbert lives may be due to the inertia of storytelling or a respect for the integrity of the text: Bede makes some small changes, but mostly he just bookends it with explanations, “look to the ant o sluggard,” and so on. But I'm still struck that the stories that precede it - in Columbanus and in Athanasius's story of Saint Anthony and the hungry donkeys, which Bede himself cites - do not do what the Cuthbert story does, nor do the many avian miracles that follow Cuthbert's. Surely this unusual feature merits some kind of commentary.
Most striking is how much like ravens these ravens are. Paul Cavill emphasized this in his early article on animals and Cuthbert, and so does Susan Crane's superb commentary on the story, which stresses both the encounter's pastoral quality, with its notable combination of hospitality and submission, and what she calls the birds' "own ravenly, ravenous obedience," which is not just "a divine puppet show." 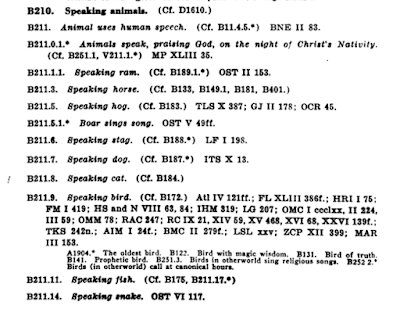 For that "ravenly, ravenous obedience" to happen, and to happen meaningfully, the story needs translation, between the saint and the birds. Again, there are a number of ways this could happen: Goscelin of St Bertin's Wereburga life has its geese plead their case "as if with a human voice." This page from Tom Peete Cross's Motif-Index of Early Irish Literature neatly demonstrates that if an animal's going to talk, it's probably going to be a bird. The Cuthbert raven encounter could easily enough have been resolved simply by having the birds apologize vocally. Instead, with "humiliata uoce," a humble or abased voice, they begin, in the Middle English, to "ruefully" "crob and cry," or, in the anonymous life, to "crocitare," to croak, a word whose very rarity in medieval Latin marks a real effort to rightly represent this avian communication.
And when the ravens bow and stretch their wings, Cuthbert recognizes what they mean. This communication is in the style of monks, which discouraged or even forbade speaking, and which required a set of bodily movements to communicate the essentials of being a monk, chiefly, obedience and submission to the community. By bowing, the birds are "speaking" in a language that is understandable both to Cuthbert and the monks who produced these stories and among whom they chiefly circulated. Bede says that the raven uses "such signs as it could," or, to put this another, way, such signs as could be understood by a human. They are accommodating the communicative needs of this human monk. And when they furnish him with a chunk of pig lard, which he uses to waterproof his shoes, they are doing what they can to help him thrive in an environment much better accommodated to their capacities than to his.
That formulation is perhaps bizarre and over-clever, yet I am framing it this way to stress that this story strikes me as being about meeting in the middle. By preserving difference, by not likening the ravens' behavior to anything else, by requiring that Cuthbert recognize what the birds are doing - he "vndirstode hir dede" in the Middle English - the story preserves enough difference for translation to be both necessary and possible. The story refuses to simply wave away the difference in capacities and lived bodily experiences of human saint and penitential birds. Without requiring assimilation, it imagines the possibility of the satisfaction of mutual dependencies.
Medieval narrative was willing to imagine communication between humans and nonhumans; and on occasion it imagines these nonhumans making themselves understood not by speaking, but by making gestures suitable to the profession of their audience: kneeling ravens with a monk, or, another example, the outstretched paws, a gesture of homage, from the lion to Yvain, a knight. When we recognize that medieval texts also often trope nonhumans as impaired, and that communication still happens, without that impairment being miraculously "cured," we can take these medieval narratives of interspecies communication as a model for thinking impairment as something other than a condition that must be overcome for the sake of monolithic normativity. For these encounters are stories of multiple nodes of normalization, multiple ways of life: what is good for a raven is not good for a saint, necessarily, and still they can meet, and make themselves understood as they are.