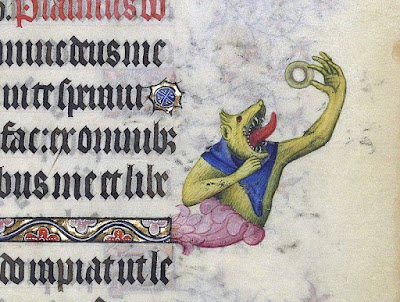 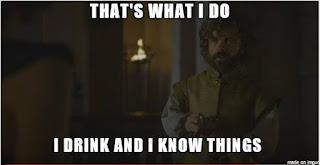 Oh, how I wish people in my department would think about this!

Thanks for sharing these reflections, Jeffrey; I've often thought too about the prevalence of alcohol in academe, something I associated especially with an older generation, yet still a primary component in many forms of professional and amicable association. I can recall how shocked I was over the drunkenness in the dorms at ICMS/Kalamazoo when I first went--and those were years of an open bar at the Saturday night dance. Less of that now, I hope, and all that it enabled; moderato e legato, no? Here's to inclusiveness and conviviality--and to donuts.

I appreciate this. The school at which I teach has a very strict faculty alcohol policy. So long as it is any kind of event associated with School, then drinking by faculty is not allowed. This has ruffled feathers, and there are those who suggest the policy should be modified to take into consideration those Study Abroad leaders going to places where one should not drink anything but the beer. However, though it seems a remote possibility, it is not impossible to think that the appearance of pictures of a School faculty member enjoying a drink (or being around several who are) on social media could cause a problem.

As a non-drinker who always feels out of place at these receptions, thank you. I'm getting into Kalamazoo late Wednesday - if I am in time for the donut reception I will definitely stop by!

Thank you for this, Jeffrey. I have long been 'the one who doesn't drink' (or doesn't drink much), which has been fine with me because too much alcohol messes with my stomach, and I don't mind being the designated driver making sure friends get back to their homes/rooms safely.

Another part of the inclusion equation that we rarely discuss is how many of our underemployed colleagues and students can't afford to drink--and sometimes even to eat at a moderately upscale restaurant. I was reading an article earlier this evening about millennial poverty in India exacerbated by professional expectations; it awakened unpleasant memories of going to conference dinners, carefully ordering only what I could afford, then having some well meaning but obtuse soul at the table suggest splitting the check evenly around the table and me too embarrassed to say that I couldn't really afford to chip in for the appetizers and wine I hadn't ordered and therefore didn't share. That's not to say that many senior colleagues weren't kind and sensitive to such things, but too often we don't realize that even a TT job may not completely offset a lingering student loan or other financial encumbrance. Since moving into a better paying gig, I've tried to pay forward the kindnesses of those senior colleagues and quietly pick up a check here and there, especially for grad students, but I'd like to see us think more carefully about inclusivity in terms of costs. BABEL does wonders supporting students and untenured folks with travel funding and reduced registration at its own conference, but there are so many other places where finances exclude and for some there is a good bit of shame involved in laying bare one's poverty.

Sad to say I won't be in Kalamazoo in time for Medieval Donuts, but thank you for organizing alternative conviviality.

Mary you make a VERY important point. Many who attend conferences can barely afford to be there. Some of your colleagues and friends have been or are in a position where something as seemingly innocent as suggesting that a table should split a dinner and drinks bill evenly is going to place a regrettable financial burden on some seated there. I have even seen an at the table declaration that people with jobs are going to pay for all the graduate students badly backfire, because not everyone with a job has an adequate salary, conference support, and freedom from debt. Having been in a situation of not being able to pay a group-incurred bill, I can attest that it is really hard to speak up and saying something like "I might already be at my credit card limit" (when my card was rejected it seemed like a public declaration that I couldn't afford to eat).

I hesitated before publishing this whole blog post about alcohol and academia because it offers a counter-narrative to the celebratory ethos of the conference circuit ... but it also ended up being timely. THANK YOU to everyone who has taken part in the conversation.

Thank you for this post, and the Twitter and facebook conversations! I really appreciated the articulation with financial issues, as someone with a job but terrible funding etc., who feels like she's missing out on the social connections by declining dinner/drinks invitations. I'm posting anonymously because it's a little too close to home, but I just wanted to add another intersection: mental illness. Much of my discomfort with conference receptions has to do with a poor ability to navigate unstructured social gatherings (exacerbated by alcohol for sure). At almost every conference I attend, I find myself wishing that more people actually went to panels and engaged with each other there, rather than blowing off the sessions and promising to "catch up at the reception." My impression is that a lot of the work that should be done in sessions and in the Q&As is being done at happy hours, impromptu dinners, and so on. This tends to reinforce already-existing friendships and exclude newcomers, early-career people, the socially anxious, etc. As for the secondary conversation, also really important, about chronic alcohol abuse in academia: most of the behaviors mentioned, especially the disappearing and the failure to meet deadlines, can also be explained by depression, anxiety, Aspergers, etc. Not to say that these don't sometimes coexist with addiction. (Late-night angry e-mails are another story I think).

Thank you for this and the many other important conversations sustained here.

When I first arrived at Indiana in 1992 for my MA/PhD program orientation, the meet and greet was called "the Sir Keg Party." Masculinist creepy farces ensued. Thank you for raising this issue.

Sylvia (of course!) said...
This comment has been removed by the author.
7:30 PM