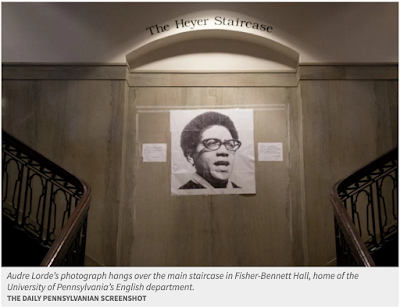 My eye opener this morning was reading letters of complaint to the U Penn newspaper in the wake of students replacing a portrait of Shakespeare in an English Department stairwell with a photograph of black lesbian feminist Audre Lorde. Some writers state that they are offended and have never even heard of Lorde. Yes, writing a letter of complaint about feeling offense rather than, say, ordering Lorde's books and reading a bit of what she has written. That pretty much sums up America in 2016: vituperating that some young people placed an image of a black lesbian feminist [who is also a poet and writer of astonishing talent; that never seems to get mentioned] above a stairway for a few days -- a spot where Shakespeare has resided for, um, decades. Maybe even 400 years.

I've been thinking about Lorde this week as an artist, critic and activist who looked around the 1970-80s and pretty much beheld the contours of 2016. Prescient, angry at injustice, unlistened to, Lorde is a writer who were she alive today would be reminding those shocked at Trumpism that many US populations have been living with his version of America for a very long time. White supremacy, misogyny, racism, denial of access to health care, violence slow and swift: Audre Lorde wrote about it all, decades ago. The Cancer Journals are an especially powerful indictment -- and a prelude to disability studies as well.

I'd also note that Lorde published mainly with small feminist, multicultural presses like Aunt Lute, exactly the kind of non mainstream press that deserves our support at the moment (http://auntlute.com/). Why not buy her books from them now? Why not buy many books?

Here is Audre Lorde's poem "Power." Remind yourself that its copyright is 1978 as you read it. The world is less changed than we think.

The difference between poetry and rhetoric
is being ready to kill
yourself
instead of your children.
I am trapped on a desert of raw gunshot wounds
and a dead child dragging his shattered black
face off the edge of my sleep
blood from his punctured cheeks and shoulders
is the only liquid for miles
and my stomach
churns at the imagined taste while
my mouth splits into dry lips
without loyalty or reason
thirsting for the wetness of his blood
as it sinks into the whiteness
of the desert where I am lost
without imagery or magic
trying to make power out of hatred and destruction
trying to heal my dying son with kisses
only the sun will bleach his bones quicker.
A policeman who shot down a ten year old in Queens
stood over the boy with his cop shoes in childish blood
and a voice said “Die you little motherfucker” and
there are tapes to prove it. At his trial
this policeman said in his own defense
“I didn't notice the size nor nothing else
only the color”. And
there are tapes to prove that, too.
Today that 37 year old white man
with 13 years of police forcing
was set free
by eleven white men who said they were satisfied
justice had been done
and one Black Woman who said
“They convinced me” meaning
they had dragged her 4'10'' black Woman's frame
over the hot coals
of four centuries of white male approval
until she let go
the first real power she ever had
and lined her own womb with cement
to make a graveyard for our children.
I have not been able to touch the destruction
within me.
But unless I learn to use
the difference between poetry and rhetoric
my power too will run corrupt as poisonous mold
or lie limp and useless as an unconnected wire
and one day I will take my teenaged plug
and connect it to the nearest socket
raping an 85 year old white woman
who is somebody's mother
and as I beat her senseless and set a torch to her bed
a greek chorus will be singing in 3/4 time
“Poor thing. She never hurt a soul. What beasts they are.”
Posted by Jeffrey Cohen at 8:03 AM


My eye opener this afternoon was doing a background search on Ernst Kantorowicz who I am reading at the moment. Immediatly came across a you tube vid by an entity called the 'Irish National Party' did not get past the far right comments to watch but the claim seem to be that these conservative German academics helped steer the extreme fringes of the right in U.S.A away from facisim.

Attempting to make a distintion between for example the Front National in France and the tea party in America, using a group of conservative medieval academics as shaping the moderrn face of the American right as the acceptable home of such thought.

Basically the claim would seem to be that the tradition of Conservatisim within American Medieval studies gives America an intellectual right wing legacy which allows it to escape the issue of the far right in Europe.

Seems to be no escape form such daily encounters at the momement.