as the year ends

What a year, huh?

I'm just back from a week in New England and NYC. I thought I'd offer a few links of interest before prepping for New Year's festivities, which are slated to include Death in the Afternoon cocktails for that classy, literary feel for which Cohen bacchanals are known.

So. If you want to practice your German, you may find this program that features an interview with me and several other scholars of the monstrous to be of interest. "Von Ungeheuern und Menschen" airs on January 1 on Deutschlandfunk and will be available as a podcast shortly thereafter. The more we think about monsters the better prepared we might be for 2017 ...

New Year's Resolutions for the GeoHumanities is out, filled with reasons for why we need more longterm thinking and some lithophilia with our humanism.

Not too long ago I published a review essay in Public Books on How to Live in Uncertain Times. Times have certainly become more uncertain since then.

Speaking of living during turbulence, if you have not yet joined WATCH (Writers Artists Thinkers Challenge Hate), please consider doing so. We are 900 strong and determined to crowdsource alternative futures.

If you're attending MLA in Philly, please join the Forum on Ecocriticism and Environmental Humanities and ASLE at an EcoHappy Hour at Milkboy from 8-10 pm on Thursday January 5. All are very welcome.

At Glasgow Review of Books, Tom White compiled a list of "Reads of the Year" that includes this blog post. I was happy to see that "The Story I Want to Tell" resonates, since it seemed to me the most important thing I wrote this year.

So, yeah. 2016. On the positive side I can say that unlike at this time last year when it seemed like things were falling apart for our son, he is in a much better place. He even declared his English major: what could be better than that? Our daughter is studying for her bat mitzvah, not eagerly, but with occasional diligence (and a fair amount of dreaming how easy it must be to be a Christian, with their trees and lights and Santa-delivered gifts). I'm behind in my work but it's been a good year of travel (Austin, Berlin, Phoenix, West Virginia, the Isle of Skye and Edinburgh, London, Maine, New York city for my first gallery talk, Richmond, Poland). But it's also a year when in the aftermath of the election I feel like a city that has come to feel like my home is being slowly taken from me: white supremacists performing Hitler salutes in a restaurant where our son had has bar mitzvah celebration and our daughter will have hers; a gunman walking into our neighborhood pizza place because he was convinced that Hillary Clinton kept children as sex slaves there; a change of mood in DC that seems profound and disorienting and likely to endure.

Perhaps I will see some of you at MLA, and perhaps some others at the protest on inauguration day, or at Women's March on Washington the following day. No matter what, though, here's wishing you some happiness and much hope for 2017. We need both, together.

PS I shot this picture from the rain-streaked window of a bus yesterday as we pulled out from Penn Station. By focusing on the raindrops and blurring the street scene the lens revealed a radiance that I did not realize until I looked at the image. May 2017 have some changes of perspective, some ecstatic moments, some unlooked for beauty and kindness for you as it unfolds. 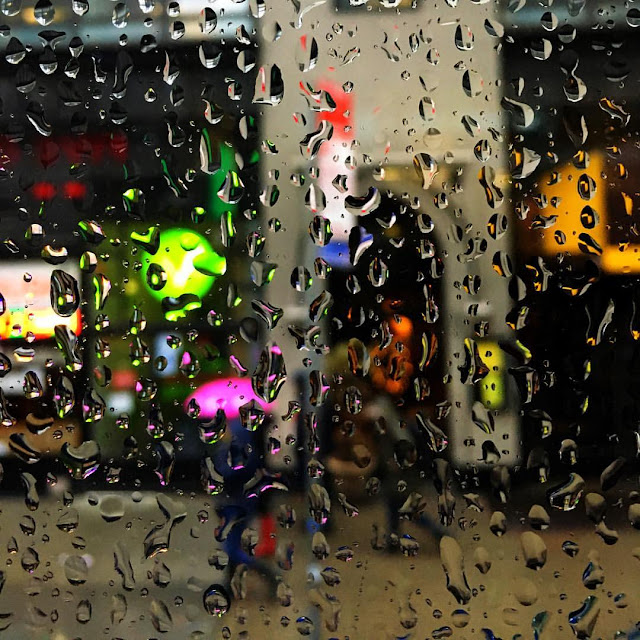 Posted by Jeffrey Cohen at 4:11 PM