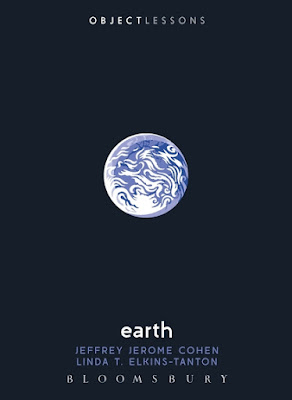 Earth is a home, a limit, and a recurring challenge.

In early celebration of Earth Day, Bloomsbury is featuring an adapted excerpt from Earth, the book I wrote with planetary scientist Lindy Elkins-Tanton on the stakes and losses of attempting to comprehend our home planet a totality, now and in the past. Read all about it at the Bloomsbury blog -- and please consider grabbing a copy of the book and supporting this ongoing series. Object Lessons enabled Lindy and I to undertake a project we could not have accomplished anywhere else: the support that the series editors and Bloomsbury staff and production people gave us was incredible. Everything we wanted from the book was realized.

As an ITM bonus, here's an account of Earth's genesis.

In the spring of 2012 the two of us were invited to deliver a co-plenary at the BABEL Working Group Biennial Conference in Boston. Our common denominator was Arthur Bahr, a medievalist at MIT who knew that we both had a strange passion for rocks. We are also both obsessed with fundamental, maybe unanswerable questions about nature, humanness and our place in the universe—as well as extinction, communication, the complexities of life, oscillations of scale and the vastness of time. The differences in our disciplinary training attracted the conference organizers: one of us is a planetary scientist who at that time headed the Department of Terrestrial Magnetism of the Carnegie Institution for Science, the other a professor of English who directs a medieval and early modern studies institute. The organizers hoped we might stage a conversation across the natural sciences and the humanities, fields that too seldom collaborate. We admit that we were intimidated by each other and worried that we would have no common language. We hesitated to meet, even though we both lived at that time in the same city. A lunch in a Washington DC sushi bar quickly dispelled those anxieties—so much so that we decided our conference plenary would be performed without a safety net. We prepared individual five-minute introductory statements about stakes, approach and method. We then sat on a stage and conversed before the audience, without a script but full of hope. We inadvertently posed to each other profoundly difficult queries that get at the heart of disciplinary differences: about the Big Question a researcher in the humanities frames his inquiry around in the hope of resolving (a humanities researcher proliferates questions, he does not answer them!), about the role of beauty in scientific research as motivator and persuasive element (to a planetary scientist beauty is personal and therefore a threat to her data and interpretation!) We loved these surprising questions that we had never thought to ask ourselves, even as the audience sometimes squirmed, sometimes cheered. This book is our attempt to expand upon a conversation that began with Arthur Bahr and the conference in Boston and has yet to conclude.

Earth is faithful to the modes in which it was composed. The letters that we sent each are not fictions. Though revised for coherence and to provide a sense of fullness and completion, the various transcripts, social media updates, and instant messages are the actual technologies and genres through which the book was written, not a literary conceit. If such devices and framings seem at times precious and disorienting, that may well be because our subject is at times precious and disorienting. We believe that Earth requires multiple modes of approach to convey both care and stakes. To be honest, we also used Twitter and Skype and face to face conversations, but we realize there are limits to readerly patience. We hope that what we have written conveys some small sense of the wide world within which this book was written. We hope that the book invites you into the conversation, as partner and as future.
Posted by Jeffrey Cohen at 6:51 AM