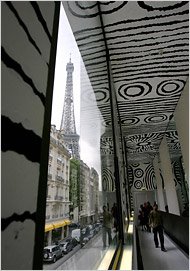 I am placing my professorial life into boxes and sorting through the accumulated detritus of a decade spent in the same office (favorite find: a Playmobil figure of a secret agent, hidden by Kid #1 in a bookcase five years ago and then forgotten; it reminds me of all the time he's spent running around this place, using my books as props in games I could never fathom but watched in admiration). I offer the following today as food for thought: an excerpt from a NYT article that ran this morning on Jean Nouvel's design of the Musée du Quai Branly, a museum that combines the collections of the former Musée de l'Homme and the Musée des Arts Africains et Océaniens.

Nouvel was faced with an irresolvable problem similar to that encountered by the architects and designers of the National Museum of the American Indian: how to encase the non-Western in a structure that might acknowledge disjunction between the mission of a museum and the lack of enthusiasm for such a mission its contents often display. The NMAI "solved" this problem by including American Indians in the design process and incorporating features that are supposed to stress the earthiness that Indians embody (curving walls suggestive of water, open spaces, light, a food court that offers salmon, corn and rice rather than hamburgers). Yet the museum's miscellaneous contents seem indifferent, even alien, to the building on the Mall that gathers them into dislocated residence.

Nouvel's problem-riddled, dreamy, and rather inventive idea for the Musée du Quai Branly was to attempt structure without rule. The museum will likely please no one with a critical eye, but Nouvel is admittedly dealing with intermediacies and hybriditities so complex as to offer no satisfying way to contain them. Here is Nicolai Ouroussoff's description of the "perverse yet also magical" Musée du Quai Branly, a description that for me emphasizes how Nouvel's museum -- and Ouroussoff's naration of the building -- seem built upon similar fantasies of the aboriginal. Aren't the words "perverse" and "magical" always used by outsiders to describe imagined indigenes? I love the photo (above) of some aboriginal art commissioned to decorate the museum juxtaposed with the Eiffel Tower, but these kinds of mixed cultural moments seem to be overshadowed by a rather reductive idea of what it means to be "non-Western":

At Quai Branly, however, Mr. Nouvel did not want to impose Western technological values on a building devoted to non-Western art. Nor did he want to create a parody of tribal architecture.

"The building could not be an affirmation of the triumph of Western architecture," he said, gazing down on his creation from the top of the Eiffel Tower on a recent afternoon. "If you understand the rules," he said, the mystery is lost.

It's a nutty idea. Without rules, how does an architect begin? Mr. Nouvel got started by observing his context. The museum rises from a 19-acre site anchored at its east end by a row of grand 19th-century apartment buildings. Their uniform facades represent the rationally ordered Paris of Baron Haussmann, who carved out the city's broad boulevards. Haussmann's efforts were seen as a way of cleansing the old city of its medieval squalor. But the aim was also to isolate the other: the downtrodden urban populace, among whom radical ideas festered.

To Mr. Nouvel this is not dead history, as recent rioting by immigrants on Paris's outskirts has shown. Thumbing his nose at Haussmann, he offers an anarchic collection of motley structures that spill out over the garden. The main body of the museum, propped up on thick columns, extends through the center of the lush space. An enormous curved glass wall shields the garden from cars roaring by along the Seine. Two small buildings — one for artists' studios, another for administrative offices — protrude from the ends of the Haussmann apartments.

The studied casualness is dumbfounding at first. The forms seem carelessly patched together. A cylindrical lobby and temporary gallery tucked under the main building seem squashed under the weight; the connection between the gallery buildings and the offices — a few small bridges — looks flimsy.

What's more, each facade is different, as if the architect couldn't stop fussing with his design. On one side of the building are rust-colored louvered brises-soleil. On the other, a row of colorful boxes projects out over the garden.

Some will attack the project as yet another example of a self-indulgent architect run amok. Others will take issue with the handicraft quality of some of the structures and the use of childlike colors, which raise touchy questions about how we portray non-Western cultures.

Yet as you explore the buildings, it is clear that a vibrant imagination is at work. The main gallery building atop the columns, loosely inspired by Le Corbusier's 1952 Unité d'Habitation housing block in Marseille, suggests a ship drifting through the city. Yet the exterior is made intentionally crude by the rust-colored blinds and colored boxes.

[post edited later in the day to prune back some bloated language]
Posted by Jeffrey Cohen at 10:25 AM