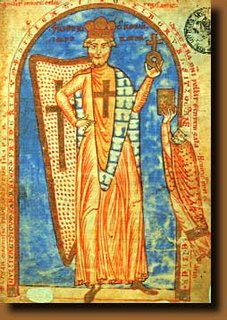 For this and other crusading myths imploded upon themselves, check out the archives of Zenit.org ("The World Seen From Rome") under 10 October 2004. Quoted below is "Thomas Madden, chair of St. Louis University's history department":

Myth 3: When the Crusaders captured Jerusalem in 1099 they massacred every man, woman and child in the city until the streets ran ankle deep with the blood.

This is a favorite used to demonstrate the evil nature of the Crusades.

It is certainly true that many people in Jerusalem were killed after the Crusaders captured the city. But this must be understood in historical context.

The accepted moral standard in all pre-modern European and Asian civilizations was that a city that resisted capture and was taken by force belonged to the victorious forces. That included not just the buildings and goods, but the people as well. That is why every city or fortress had to weigh carefully whether it could hold out against besiegers. If not, it was wise to negotiate terms of surrender.

In the case of Jerusalem, the defenders had resisted right up to the end. They calculated that the formidable walls of the city would keep the Crusaders at bay until a relief force from Egypt could arrive. They were wrong. When the city fell, therefore, it was put to the sack. Many were killed, yet many others were ransomed or allowed to go free.

By modern standards this may seem brutal. Yet a medieval knight would point out that many more innocent men, women and children are killed in modern bombing warfare than could possibly be put to the sword in one or two days. It is worth noting that in those Muslim cities that surrendered to the Crusaders the people were left unmolested, retained their property and were allowed to worship freely.

As for those streets of blood, no historian accepts them as anything other than a literary convention. Jerusalem is a big town. The amount of blood necessary to fill the streets to a continuous and running three-inch depth would require many more people than lived in the region, let alone the city.

I am relieved to hear that logic dictates that three inches of flowing blood were a biological impossibility at the storming of Jerusalem, and that therefore the Crusades were not actually all that violent. After all, many of the Muslims, Jews and non-Western Christians dwelling in Jerusalem were probably "ransomed or allowed to go free." If only they had surrendered, they could have retained their property and worshipped with liberty. Foolish them.

PS I'm not arguing -- as does the straw scholar that Madden sets up -- that the crusades were thoroughly wicked. And I don't doubt that crusaders were motivated by piety. Like all human endeavors, the crusades were messy, heterogeneous, replete with conflicting and mutable motives and objectives. I do wonder, though, what is at stake in such defensiveness about the inherent goodness of the enterprise.

(thanks for the tip to Frater Meus)
Posted by Jeffrey Cohen at 4:19 PM

By modern standards this may seem brutal.

And no doubt by medieval standards, too. I'm reminded of the German chivalric narrative, Ortnit, in which the eponymous hero and his friend Ilyas take Tyre from the heathens after a protracted battle in which the Christians lose many men. Ilyas finds members of the defeated army hiding. They offer to convert, and Ilyas imposes a "penance" of "fasting until Judgment Day" on them. A joke: he then cuts his way through the room until he finds a group of cowering women. He starts in on them too, until Ortnit intervenes:
"You are mad! The women you have killed have done nothing. You should remember that your mother was a woman. If you want me to perform any service for you, then, for my sake, put away your sword. You have the mind of a child! Come, help me baptize those who desired to become Christians” (24). Ilyas storms off, kicking all the wounded.

A period as "heterogeneous, replete with conflicting and mutable motives and objectives" as our time, whatever that is, can be.

I do wonder, though, what is at stake in such defensiveness about the inherent goodness of the enterprise.

I think you've as good an idea as I do, but somehow in the midst of all your duties, you find time for charity. Maybe.

Argh! Appositives get you every time.

Woah - so much blogging - you hitting your stride again sir?

I did have some posts in the queue, and today finally gave me the small space I needed to release them. Enjoy!