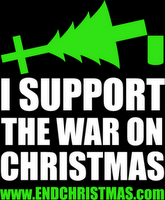 At 4.47 this evening, just as the sun dips below the horizon, the Cohen children will light the menorah, gobble the gelt, and complain that the latkes don't taste very good (Kid #2 has asked that hers be flavored with candy canes). Hanukkah is a secular holiday, not a sacred one. No, this is not part of the War on Christmas.

I love how the cross has toppled the tree at left, as if to say that the pagan conifer has a hard time supporting the symbol it's been made to bear. Festival of Lights, Christmas, Winter Solstice, Saturnalia ... who cares? Doesn't everyone need a little syncretic celebration of winter's advent?

I, unfortunately, missed the lighting of the menorah this evening at my friend Amy's house, having arrived at thirty minutes past sundown. Drat. She is now at a friend's bar mitvah and I am drinking her store of white wine and reading this blog. This is as Jewish as I can get [for now]. And yes, JJC, I agree, everyone needs a little celebration of winter's advent, snycretized or otherwise. Cheers to that.

I find it odd that you, as an academic, would suggest that the origin and development of a symbol or the roots of a social celebration - is of little importance

Did I suggest that? I didn't mean to. I'm all about history; why else would I be a medievalist?

The point I was trying to make, though, is that holidays over time become things that they were not originally: Hanukkah and Christmas, for example, becoming festivals of winter (as well as other things). Christmas trees don't have much to do with the Christ child, for example -- nor was Jesus likely born on December 25.

Likewise Hanukkah: a festival of not so great importance elevated and transformed over time, joining a conglomeration of historical holidays that congregate around the solstice and taking on other meanings from them.

Thank you for the clarification - of which I am in agreement.

I suppose my concern is the tendency to ignore - or rather slip into a comfortable denial regarding the meaning conveyed by symbols - in this case the Christmas tree. Though the "Christmas tree" pre-dates its religous significance - which I think one could say it has enjoyed for at least 1000 years -- I doubt people would still be chopping down trees, dragging them into their homes and decorating them today if it were not related to the celebration of the birth of Christ. I just don't imagine there are many who, for example, pass by the Rockefeller Center tree and think: "ah, yes, the Winter Solstice." Should what is now commonly known as a Christmas tree, progressivly take on a meaning other than a Christian one, I have no problem with that - as you point out, it is hardly central -- but I am troubled by a new meaning being imposed upon the symbol for the sake of...who really knows? Thanks for the response. And, Jesus was not really born on Dec. 25th...ah...most be some kind of symbolic connection to the winter solstice...no?

JJC is right about holidays and rituals changing meaning, but not necessarily losing value thereby. Over on this side of the equator, we have just decorated our tree; my son is building a nativity scene out of Lego; it is the end of the academic year; and a week from the summer solstice. The days feel as ritually laden with family and seasonal and cultural traditions as it's possible to feel. I don't think you need to be a complete and utter believer in the origins of festivals to participate in them.

Anonymous: You are right, of course. Most people purchase a fir tree, bring it inside their homes, and hang it with lights and ornaments (everything from snowflakes to Sponge Bob) because they connect these things to Christmas, and in an implicit way with the birth of Christ, angels, shepherds, mangers ... just like at Easter they eat chocolate eggs and rabbits, and at least implicitly connect these ancient, springtime fertility symbols with Christ's return from the dead. That's human nature: we gather the old to the new, we re-enact rituals whose meanings and history we don't fully comprehend, we adapt these celebrations to fit our lives and present circumstances in ways that keep them alive and fresh.

Stephanie: case in point. The Christmas tree doesn't lose all meaning when it migrates to the antipodes. Its meaning is sustained whenever it is decorated and made a centerpiece of family ritual. I guess I was trying to make the point that such meanings can be far more ancient than their contemporary contexts, far more ancient than even early Christian contexts, and alive with new meanings given through local determinations .... like your family in Australia. Or like mine in Washington, DC.

PS In the spirit of holiday cheer, this.