Of B Movies and Medieval Monsters 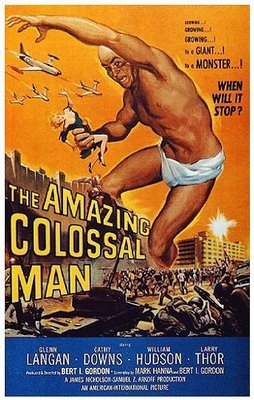 Inspired by our recent conversation on reading lists, movie lists, and the monstrous middle ages (It's Snowing Posthumans), I offer the following from my book Of Giants: a brief meditation on the power of bad films as a catalyst for the interpretation of medieval texts. In this case, a movie beloved to me from childhood viewing helped me to transition my book's argument from terror to comedy.

------
The Amazing Colossal Man
Only in the embrace is the other's body known as one's own, in parts.
-- Susan Stewart, On Longing

The 1950s were a decade of monsters: giant spiders, giant ants, giant bees, giant praying mantises, giant alien fungi, and of course, plain old giants. No other period in recent memory has been so obsessed with constructing, deconstructing, and reconfiguring the category "monster," with employing the label for nationalistic, capitalistic, misogynist, and culturally imperialistic ends. One of the most memorable giants of the time was Glenn Manning (Glen Langan), otherwise known as The Amazing Colossal Man (1957, Columbia TriStar). Manning's sad story begins when he is exposed to radiation during the testing of a nuclear bomb. His hair falls out, giving him that retro-futuristic look of which the Fifties were so fond, and then his body suddenly starts to enlarge. Both he and the expandable loin cloth which the army specially designs for him grow at a fantastic rate, until he reaches a towering (amazing and colossal) sixty feet of height. After some touching moments in which he bewails the loss of his humanity, synonymous in the film with a quiet existence as paterfamilias, Manning rapidly becomes insane. When he rampages against the institutions which construct him as monster (the military, the family, the period's suburban dreams), he is hunted down and slain. The Amazing Colossal Man dies in a spectacular fall from the Fifties' favorite monument to human progress over wild nature, the Hoover Dam.

Or, at least, the audience thinks he dies. When the movie turned out to be a drive-in smash, Glenn Manning returned in War of the Colossal Beast (1958, Columbia TriStar). The tumble from the dam has disfigured and desubjectivized the monster. No longer played by the same actor, crazed and unintelligible, the Amazing Colossal Man has ceased to be a man at all; he is inhuman, wholly animal. Suspended no more between categories, easily labeled and easily dismissed, he dies a second time in this uninteresting sequel, never to return.

For all its B-grade science and campy excess, The Amazing Colossal Man is an intriguing popular culture meditation on the construction of masculinity in the late 1950s. What happens, the film asks, when a man outgrows the restrictive paradigms of daily living that have produced him as a docile subject? What happens when the aggressive and erotic drives which are supposed to undergo sublimation (at least according to the Freudian model then dominant) are instead expressed in all their elemental purity? The movie could not raise these questions unless it first constructed entwined visions of masculinity and monstrousness to be interrogated. Manning enters the narrative as the typical contemporary male: a husband and father, respectful of authority, happy in his social place. His becoming a giant amounts to a discovery of the truth of what he always already was, beneath the suburban miniaturization of his life. The giant's monstrosity is his insistent, exorbitant exhibition of what he is supposed to repress; the fantasy he embodies is that such "primal" wildness is somehow related to a purely natural state, to the lives of (male, aggressive) animals.

Despite the rampage with which it closes, the film is more comic than tragic. With his fantastic stretch diaper, limbs that do not know their own strength, and subjectivity never at home in the awkward figure it occupies, the giant of The Amazing Colossal Man suggests that there is something quite humorous about the dangerous body of the giant, and about the process of masculine embodiment within which the giant is always caught. The Amazing Colossal Man demonstrates that the "cosmic terror" which the medieval giant inspires in its romance audience is only a fragment of a larger story, a narrative of comical pleasure commingled with dread and fright.
Posted by Jeffrey Cohen at 3:40 PM

Ever since I read _Of Giants_ I haven't been able to read _Bevis of Hampton_ without picturing Ascopard in one of those loincloths jumping on the table and screaming, "Icham to meche te be critene!"

I like it that the Amazing Colossal Man's underpants grow with him. Were they nuked during the plutonium explosion too? Or did the army continue to manufacture ever-bigger undies?

JKW: don't you know that lycra is infinitely stretchable? If you'd stop wearing polyester and choose a more up to date synthetic you wouldn't be wondering.

JKW - actually, the Army Corp of Engineers designs a special expanding loin cloth for him, although of course they never explain how they do it.