The Tiny Shriner Review, Issue #2: Things that Are [Almost] Funny 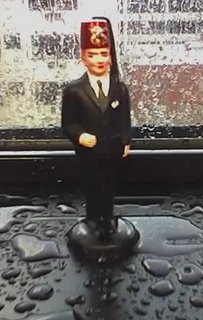 When not occupying his usual spot on J.J. Cohen's occasionally flooded office windowsill, the Tiny Shriner [not to be confused with Travelocity.com's gnome] surfs the blogosphere looking for interesting threads and conjunctions. But first, the Tiny Shriner agreed to pass along an intereresting moment of convergence [or is it synchronicity?] between BABEL and Michael Crichton, which he and I, following Karl's injunction, thought might be funny, in a trans-species kind of way. This past October, when the BABEL Working Group was in Oxford, MS at the annual meeting of the Southeastern Medieval Association, one of their invited speakers, Deirdre Joy, who is a geneticist at the National Institutes of Health in the Labaratory of Malaria and Vector Research, delivered a paper, "The Planet of the Apes Comes to Mind," in which she informed us that,

In 2001 a paper was published in Science in which human brain stem cells were grafted into the brains of fetal monkeys. Subsequently, a working group was convened to consider the ethical implications of such studies and the findings were published in Science in 2005. The working group unanimously rejected ethical objections grounded on unnaturalness or crossing species boundaries. A recent National Academy report notes the notion that there are fixed species boundaries is not well supported in science or philosophy.

They agreed that the central issue is whether introducing human cells into nonhuman primate (NHP) brains raises questions about moral status. One conceivable result of human-HNP neural grafting is that the resulting creature will develop humanlike cognitive capacities relevant to moral status. How does that change our moral obligations towards them? To the extent that a NHP attains those capacities through neural grafting, that creature must be held in correspondingly high moral standing. (Which I suppose might include not having to undergo neural grafting).

The criteria deemed plausible and widely accepted for determining moral status were mental capacity such as the ability to feel pleasure and pain, language, rationality, richness of relationships. But there’s a problem here, acknowledged by the working group - establishing whether and in what ways engrafted animals undergo cognitive or behavioral changes requires an understanding of what the normal range is for a particular NHP species. But we really don’t know. The report concedes that, “Even if we observe what appears to be more humanlike capacities in an engrafted animal, we may be unable either to establish whether capacities are outside of the normal range of that species or to interpret the moral meaning of observed changes.”

As the Tiny Shriner himself concedes, in such difficult ethical dilemmas as these, we must turn to the fiction writer. It appears our wait is already over, as Michael Crichton's new novel, NEXT, the promotional tagline for which is "welcome to our genetic world--fast, furious, and out of control," in addition to a main plotline about a cancer patient, Frank Burnet, who is being hunted down by a biotech company who wants his rare cancer-fighting cells, includes the following side-plots:

Tourists in Sumatra are cursed in fluent French and Dutch by an orangutan that has human genes, the result of an experiment barred in Europe. A transgenic parrot named Gerard embarrasses people by reproducing the words they say and the sounds they make during illicit love scenes. A UC San Diego scientist, Henry Kendall, learns that sperm he donated to a federal primate research center in Maryland has produced a son, a 4-year-old transgenic chimpanzee named Dave. Dave is scheduled to be terminated — this experiment too was illegal — but Kendall sneaks him out of the facility, takes him home and tries to raise him as a normal child, though schoolmates call him "Monkeyboy" and a passing farmer sizes him up as stoop labor. Advertisers dream of implanting their messages in genetically altered fish and animals.

Since Karl has been asking us to think about humor, is it just me and the Tiny Shriner, or is the above really, really funny? Or, scary [as Crichton would likely have it]? In other, related news, I think we can go ahead and laugh at Crichton's vision of the future [present?], since Richard Dawkins has finally decided to make it [almost] definitive: Why There Almost Certainly Is No God.

Got medieval, anyone? Still trying to stay in Karl's humor groove, we note that over at Geoffrey Chaucer's blog, the apparently self-styled medievalist rapper Baba Brinkman, who created The Rap Canterbury Tales, has absolutely no sense of humor at all. Meanwhile, Glaukopidos is laughing at Britney Spears reflecting on Antigone, among other things. JKW of Pistols in the Pulpit has finally posted his 2007 Dead List, which for some, including JKW, may be funny. And Margaret Soltan over at University Diaries lets us know that Christopher Hitchens has decided women are not funny at all, which Prof. Soltan finds amusing. The Tiny Shriner is not laughing. The Tiny Shriner is also hoping that Pete Doherty, as JKW surmises, will not die in 2007, as that would leave Kate Moss all alone with no one to behave badly with and look good together while doing it.
Posted by Eileen Joy at 12:43 PM

What does The Tiny Shriner's meditation on transgenic compilations have in common with Karl's post on those funny Middle Ages? It all comes down to h.d.'s question in the comments to the latter: what if the humor is a misfiring, unintentional, a misreaction to something sober?

So what? Authors don't get to choose their gravitas; they either earn it or they don't (or they earn it for a while, but then the times change and, hey, aren't sky blue leisure suits and polyester stretch pants and transgenic compilations kind of funny nowdays?)

Crichton is so damn earnest and so damn grave that he always cracks me up. I love how his books are built upon the condemnation of the thing they celebrate. Lost World is probably the clearest example ("Do not replicate dinosaurs because it violates the laws of nature, the proof of which is the fact that these beasts will go out of your control and devour you! Meanwhile, and before they go all carnivorous, isn't it great to look in awe at reanimated dinsoaurs?") The "cool" theoretician of chaos in that book has to be Crichton's own self-projection as author. What an annoying, whiny and moralizing nerd. Why couldn't he be devoured by a raptor?

Lastly, on Margaret Soltan: I can't think that she is serious in her post on women and humor. She possesses quite the qicked sense of humor herself.

Just a quick thank you to EJ. I love the Crichton. What would my life be without Westworld? (it's be a world with one fewer denial of global warming) I can't help but think of Caliban, "You taught me language; and my profit on't / Is I know how to curse."

And it's interesting to see that the determinate of whether a hybrid creature--a supererogatory adjective, because "the notion that there are fixed species boundaries is not well supported in science or philosophy"--deserves rights is the extent to which it possesses "humanlike cognitive capacities." Again, we see that the human umwelt is thought to be the apex of them all.

Now, the transgenetic parrot bothers me a bit: how does it know what love is illicit? Grey parrots, at any rate, are highly intelligent and live for a very long time. It strikes me that the more we know about them, the more transgenetic they seem, because they don't fit comfortably into species hierarchies--especially because they're highly intelligent birds, a class that's, according to popular evolutionary teleologic narratives, should be, in toto, behind mammals. Grey parrots, in other words, seem mammalian to the extent that we want to slot animals into an evolutionary pyramid with mammals, especially primates, at the top.

Thank you, JJC, for pointing out what I have long believed to be true: Michael Crichton's dire earnestness often becomes comedic, if read "against" Crichton's too-serious intentions. While reading all the summations of the plot of his book in various reviews, while I knew Crichton intended his book to be a kind of horror story about the near-future, I couldn't help but laugh [although the issue of grafting human cells into primate brains is not, in my mind, funny at all, but somehow tragic].

I think, too, as JJC points out, that Prof. Soltan's post on Hitchens's essay on women and humor must have been somewhat toungue-in-cheek.

And Karl, I think the transgenic parrot knows illicit from licit love because he's read the Bible? Or, is it from the epistemological evidence at hand? Or is it part of the genetic chain of his former, lived-as-human selves? In any case, the whole idea is just absurdly funny. On a more serious note, thanks for pointing out some of the obvious logical [and hence, also, moral] reasoning flaws in the determinations of the group that reviewed the work on grafting human cells into non-human primate brains for its ethical implications. But I guess it kind of raises the philosophical and/or scientific question of, if we accept that there are no fixed species boundaries between a "human" and a "chimp," on what basis *shall* we determine whether or not this experiment is ethical or not?

But I guess it kind of raises the philosophical and/or scientific question of, if we accept that there are no fixed species boundaries between a "human" and a "chimp," on what basis *shall* we determine whether or not this experiment is ethical or not?

Exactly. As you know, I'm dubious about elevating certain traits into the position of being the measurement of rights or, if we follow the Singer model, chits, I guess, that can be tallied up to determine the most beneficial behavior. Why? Because as 'objective' as those traits are--"language, rationality, richness of relationships" for example--they're always idealized human traits. There's no effort to come to terms with the great alien distance between us and other cognitive systems, systems that may, indeed, not be based around individual lives but around swarms, ever shifting hive-minds.

How do we determine what is right to do? No idea. We may be in a classic situation of 'Je sais bien, mais quand même" that might better be articulated as "Je ne peux jamais savoir, mais quand même" (I can never know, but just the same...). I don't particularly see a way out of this impasse.

Crichton may be earnest; he may be a global warming denier; but he's also a total creep.