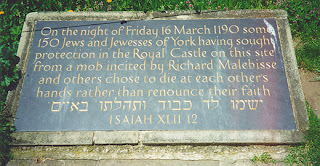 Today is the anniversary of the terrible events at York in 1190. I paste below a short summary from the BBC website. The best scholarly discussion is R. B.Dobson, The Jews of Medieval York and the Massacre of March 1190, University of York Borthwick Papers 45 (1974, rev. 1996).

One of the most infamous of the pre-expulsion pogroms took place in York on the site known as Clifford’s Tower. In March 1190, six months after the coronation of King Richard I, the city caught or was set on fire. Under cover of the fire a mob targeted the Jews. The family and friends of the leading Jew called Baruch* were attacked and killed and his wealth looted. He himself had already been killed in an attack at the time of the King’s coronation.

This and the attempted murder of Joseph, another leading member, led the Jews to seek shelter. They naturally looked to Clifford's Tower, the site for two castles built by William the Conqueror after his conquest of England in 1066. Its wooden defences or keep were first burned down during a local rebellion in 1069 before being destroyed for a second time during a siege of Jewish citizens in 1190.

The 1190 massacre stained the city's reputation for many centuries:

On Saturday March 16, 1190 there was a special Sabbath celebration linked to the festival of Passover. As it dawned:

If you would like to read a bit more about how the events continue to be remembered and struggled over, check out this report of plans to build a shopping mall beside the site and the outrage these plans spurred.
(thank you, N50, for spurring this quick post)
Posted by Jeffrey Cohen at 2:10 PM

Today I read out that very inscription in a radio recording with RBD. The lettering is much faded now and needs regilding - so my reading faltered in places where the script was almost too faint too see. You will be glad to know that we deliberately recorded it with the voices of children (a school party eating their lunch) in the background.