It's a Love Machine: On Finally Meeting (and Loving) Jeffrey and Karl, and Oh Yes, that Michael Uebel Fellow 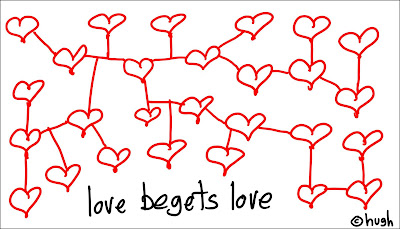 Well, suffice to say, it's taking longer than usual to decompress after Kalamazoo, and thanks to JJC's incessant flattery I had to visit my doctor [internal medicine specialist] this morning to have my head deflated by about ten sizes, but don't worry, my brain's still big--wait a minute, I think I have to revisit that doctor.

Well, it's official: I'm in love with Jeffrey and Karl. You know how sometimes you engage in one of those online-digital-phone-letter-type of relationships, and it's really intense and you think you may have met your soul-mate, and not just any soul-mate but the kind who you're pretty sure you spent previous lives with [or wish you had], and there's all sorts of mind-melding, and then you meet them in person and they're like the equivalent of an insurance salesman [and not the good kind--in other words, not Fred MacMurray in Double Indemnity], or they just kind of stare at you like you should do all the talking. Not so with Jeffrey and Karl, and thank god is all I can say. We all stared at each other intensely and no one backed down. And Karl and I even danced. Now, I know that N50 would like a report on the dance but I may not be the one most suited to deliver that. The reason is, I was dancing. You see, to some, the dance is a thing to be mocked, and the dancers, to be pitied. Not so for BABEL, and since I was with Betsy McCormick who, as we say in BABEL, doesn't just go to the dance, but is the dance . . . well, there you have it. I believe there was singalong activity on the part of certain BABEL-ers [including Karl and the wonderful Anhaga of Old English in New York] who were more than happy to shout out in unison the lyrics to songs by Queen, Journey, and Bon Jovi. This is potentially embarrassing, and we may need our agents to do some damage control--to deny, but also to affirm in order to deny. But in the meantime, we stick by our story. Yes, we danced--Karl was even a special category unto himself; you could only dance around him and marvel--and yes, we sang to really bad pop-rock songs. We did not polka, because there are some things even a BABEL-er won't do, and we draw the line at polka. Also at the macarena. One among us who shall remain unnamed [but who is a graduate student at Ohio State who--no, that's all I'm telling you!] danced so well she has a veritable career ahead of her in dance if medieval stuides doesn't work out. She stunned and amazed us with her moves. Those young people--they know and can do everything. So, yes, we danced, with wild abandon, even, and no sense of self- or career-preservation. Now, get over yourselves.

There will be a post by me later on in the week regarding BABEL's "premodern to modern humanisms panel," and the so-called BABEL manifesto is right [behind me] around the corner, but a few words about the "What Happened to Theory in Medieval Studies" panel: it was so cool, especially Michael Uebel, who I placed at the end as our "closer," and he didn't disappoint, urging us to think of theory as a "how" and not a "what," and further, to understand how the "point of theory is to suspend the finality of deep structures, and to elicit and amplify the forces of potential change"; therefore, theory is not a critique of reality but "a new, affirmative construction of the real." Michael also urged us to refuse academic narcissism and to embrace the idea "that what one says comes from the place of not-yet-knowing." One person in the audience even remarked that Michael's talk energized him and made him feel that the career path he had chosen [one that involved dropping in and out of academia but continuing to work as a scholar] had been affirmed. In other words, Michael's talk created a space for a relational moment that was genuine and not about posing one comment against another. What a feeling, as a certain lyric put it. Amazingly, both BABEL panels had several of these moments, where audience members, instead of asking the typical "but how does what you just said compare to what I think already?" questions, instead more often talked about feeling energized, affirmed, and "found" somehow by what was being discussed.

In their opening salvo, the gangster-collaborators known as Marty Shichtman and Laurie Finke reminded us of Jorgen Tessman, Hedda Gabler's scholar husband in Ibsen's play of the same name who "spends the entirety of his honeymoon scouring Europe for manuscripts and antiquities, all while his sexually frustrated wife practices with her pistols and dreams about the bad-boy critic Eiler Lovborg," and what the play teaches us is that some scholars are "dull, lacking in imagination--both in their intellectual pursuits and, it seems, in bed. . . . Ignoring the erotic potential of human interaction, they have fallen in love with the dead--whose objects they fetishize." In her talk, "Springtime for Theory," Anna Klosowska talked about reading theorists "as a trove of strains of thought" against which her own arguments, in Dinshaw's phrase, "groovily emerges." Further, Klosowska expressed her need for these texts as "playmates and interlocutors," although, albeit, it is a rather "lonely play date." Nevertheless, her interest in postwar and current theory is, as she said, "based on my perception that it sharpens my ability to read premodern texts in order to have relevant conversations with living interlocutors in other fields, mostly modern." James Paxson argued for a "revived biologism" in medieval and other studies of sex and sexuality, especially [and this is the cool counter-intuitive moment] because "science, which perforce must center sexual distinction and reproductive practice on the question of origins, cannot itself readily sort constitutive terms." Further, the "most salient biological studies attempting a prehistory of sexuality and gender . . . have tried to distinguish the binary nature of genomic needs in sexual beings from the physiological agencies that deliver such genomic needs," which is why it was possible for Jim at one point to invoke "a remarkable prosopoeia: the rectum doesn't know it's a rectum as the vagina doesn't know it's a vagina; both organs think they're cloacae." [And yes, you should look up cloacae.] If some of us aren't sure we can apply the insights of modern science to medieval texts, Jim urged us to embrace "conceptual" and "creative" anachronism "as a critical tool of discovery." Steven Kruger's and Ethan Knapp's responses were equally bracing, and interestingly, they both cautioned about the need to think more deeply about what we think we mean when we say we want to be "interdisciplinary."

But here was the biggest shocker of all: you know that Michael Uebel guy who has a reputation for being critically tough [even, the guy who lobs grenades and blast arguments to bits], and can even appear mean sometimes? He can only be described as shy and even, almost huggable. Understated. Quiet. I won't say "nice." He'll kill me. But I will say that I am glad Michael Uebel exists. We need Michael Uebel.
Posted by Eileen Joy at 6:27 PM

MU has quite an other effect on people, an effect coming unpredictably, from elsewhere. Like the pharmakon in Plato's texts, it perhaps remains undecidable in any instance, whether this effect was remedy and/or poison. Or, indeed, whether or not he was a pharmakeus, a kind of magician, a character no logic can confine within a noncontradictory definition. Or a pharmakos, a rascal, a contaminated and contaminating agent, to be expelled in one way or another.

Wow - sounds amazing - esp MU - and to think while you were doing all that we were dancing to the Eurovision song contest. Sometimes virtual relationships are so damn - well - virtual.

The theory panel did indeed rock and Uebel's call to unknowing and the real is still ringing in my ears.

Some quotes on love that come to mind:

"Love is essentially self-communicative; those who do not have it catch it from those who have it. Those who receive love from others cannot be its recipients without giving a response which, in itself, is the nature of love. True love is unconquerable and irresistible. It goes on gathering power and spreading itself until eventually it transforms everyone it touches. Humanity will attain to a new mode of being and life through the free and unhampered interplay of pure love from heart to heart" (Meher Baba)

I second n50's wistful comment on the limitations of virtual relationships -- if only it were as easy to lurk in person! The session sounds more inspiring by the second.

Following Nicola, my favorite quote at the moment:
"Love and research -- it's the same movement." (Bruno Latour)

"People today seem unable to understand love as a political concept, but a concept of love is just what we need to grasp the constituent power of the multitude...We need a more generous and unrestrained conception of love...Love means precisely that our expansive encounters and continuous collaborations bring us joy" (Hardt and Negri, Multitude).

To paraphrase Zizek, Is it possible not to love our PharmaKing Michael Uebel?

audience members, instead of asking the typical "but how does what you just said compare to what I think already?" questions, instead more often talked about feeling energized, affirmed, and "found" somehow by what was being discussed.

I missed the theory panel, but I *totally* felt this after the humanism panel -- that's why all I could do was offer a reading suggestion, rather than ask a question, because I was still processing, and continued to do so all conference long. What a great panel to start off the conference!! And I'm still talking about it. I told Bullock last night about Tim Spence's Book of Hours/iPod paper when I saw one of those iPod ads he referenced. Bullock was fascinated and he's a political theorist. So you guys are definitely speaking to the broader humanist audience. Way to go!

And again, sorry I had to miss subsequent panels. Duty called elsewhere.

As for the dance -- I danced with Karl earlier in the night, and he is indeed in a category by himself!

Festshrifter, mon ami, I feel you.

Uebel is, well, Uebelian in stature in my book. I don't know a better read medievalist, and there I talk about him as if he were a medievalist still.

I send students to him to work with him via email. He has always been incredibly nurturing.