weekend frivolity: what's on your bookshelf?

Karl was good enough to share his shot. What does your bookshelf look like these days? Send me a photo (jeffreyjeromecohen[at]gmail.com) and I'll post it over the long weekend. 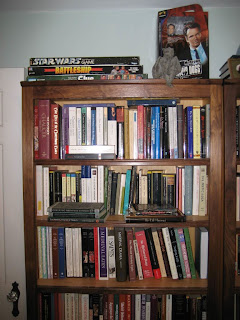 DR VIRAGO'S BOOKSHELF
Though rumor has it she went out and bought that big-ass MEDIEVAL LATIN book just for this photo shoot, it is reassuring to see that you can have Battleship and Queering Medieval Genres in close proximity without some kind of deathmatch erupting. Note, too, that Getting Medieval is as evident on her shelf as it is on mine. Also, she and I own pretty much the same books of Chaucer criticism and line them up like similar little soldiers. BUT this isn't about me; this is about the fact that Dr Virago plays Clue. Ever since Professor Plum did it in the Library with the rope, I've been scared to play. It cuts too close to home. 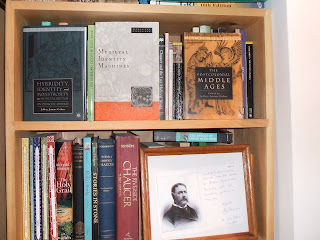 E 2: JKW's SHELF
Can you tell that he was once my student? And that he is fond of the meals I buy him from time to time? Don't ask him about the Chester A. Arthur Appreciation Society membership plaque, though, because officially that club does not exist. And I did NOT induct him into it. 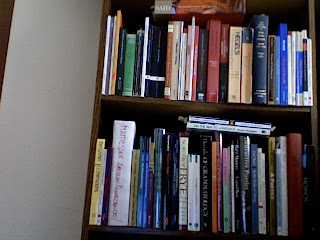 UPDATE 3
DAN REMEIN'S SHELF Hegel, Frye, Said, Derrida and something from the Loeb series ... giving the word "eclectic" its proper definition. But where is Getting Medieval?! UPDATE 4
Another Damnèd Medievalist's Bookshelf
This photo resolves the eternal mystery of what Christmas trees have to do with The Iliad. I am compelled to ask: what exactly did she remove from that bottom shelf before the photo was snapped? Getting Medieval perhaps? UPDATE 5
Kid #1 asked to be included. Can a good dad say no? He's even setting ITM as the homepage for his web browser as he inherits an old laptop. Note a prominent book sent to me by the publicist of a famous author (note too that it is in mint condition). Note another book from a series I often mention here. One more thing: these are the books he is reading now, in the "cow shelf" above his bed. His real book shelf has hundreds of titles; he reads much more than I do. UPDATE 6
Brandon Hawk's Bookshelf
He has more Tolkien than my son! And Icelandic sögur up the wazoo! Unfortunately there is also some contamination of the medieval contents due to a mislaid Paradise Lost.

UPDATE 7
Stephanie Trigg's Bookshelves (click on images to enlarge)
Two shots: one, a bookshelf covered with sheets. Stephanie claims that she has done this because of a domestic renovation, and that her copy of Getting Medieval is beneath the drape. Me, I suspect this is the Australian version of Ghost Clock, and that there is no shelf at all beneath the sculptural object. Second, we see a nice display of her current research books. As those who read her blog know, she is working on the Order of the Garter. She writes "note the picture of Queen and Duke wearing Order of the Garter regalia in the foreground..." I love little book collection-shrines like this.

Michael Uebel's Bookshelves
We knew from his bibliographic effusions that MU is well read but ... yikes! Behold the Library of Uebel, to which ancient Alexandria pales in comparison. And who is that severe Viennese man glaring from the wall? I feel like I'm playing "Where's Waldo" with this one ... and have to say that I am very impressed with the thoroughness of his eclecticism (when else can you put those two words together?) Click on the image for hours of fun cataloging his reading.

Frequent commentator RaeRae has important things (like stuffed monkeys) taking up shelf space, so tomes are banished to drawers. Squint and you will see a Blemmyae. Borges, the poet H.D., a frolic of Winnie the Poo figurines plus Winnie ille pu, Sartre, The Autobiography of Malcolm X, How to Write, Simone Weil ... and an empty beer carton. It could only be the workspace of EILEEN JOY.

Posted by Jeffrey Cohen at 8:41 AM

Maybe I'll provide a fuller view when I get home. Hilarious to me, also, how many books DV and I have in common. A quick glance nets me: Bevington's Medieval Drama, Riverside Chaucer, On Giants (tell me you didn't move that to the top of your shelf for points!), Poetic Edda, Medievalism and the Modernist Temper, From Boys to Men, Getting Medieval (natch), the Oxford Lancelot, that volume of the Comedia, (and I expect the Penguins, Everyman, Minnesota volumes, MART, and TEAMS match up nicely, and is that the Modern Library drama or medieval romance volume?), Chambers' Mediaeval Stage, Performance of Self, and the Blackwell family anthology. I almost feel as though there's some kind of academic I Never bookshelf variant going on here.

I think the first person who posts Postmodern Beowulf on his or her shelf wins.

I should like to say, Dinshaw's book is on the botom shelf, to the far right. Its hard cover without a DJ, reddish.

OK, Karl (and JJC, too), it's really scary how you can identify books by general size, shape, and color, because many of those books' titles are *not* clear in that photo. I had to freakin' get up from my chair and search in real life for the Modern Library volume you mentioned, Karl, but I couldn't tell from the pictures what was on MY OWN SHELF! And it's the Romance volume -- with the romance section of my shelves, natch.

Of Giants was already there when I took the picture, but clearly it was purchased after the shelves were first arranged last year. The Postmodern Beowulf is at my office at school.

And I think it's funny that no one has pointed out that I have Getting Medieval and a Quentin Tarantino action figure in close proximity! I should win some kind of pre- to post-modern (sexualities) prize for that!

Oh, and JJC, you're kind of right about the Medieval Latin volume. It's a reference book/resource guide and I don't think I've ever used it!

Also, she and I own pretty much the same books of Chaucer criticism and line them up like similar little soldiers.

You guys will not like my book shelves, I don't think. It will not be at all what you expect. But I'll try to take a photo tomorrow or the next day.

What's the standard here? Academic bookshelves or any bookshelves? (I keep home and work strictly separated.)

Although, it should be noted, I don't have Dinshaw's Getting Medieval in either location. :)

Dr V, you need to practice your stare. Then you too will discern obscure titles even in low resolution jpegs.

Rob, shame upon your segregationist proclivities! If Getting Medieval isn't part of your home, then you are just not forming those tactile communities by which we at ITM are entranced. But, either shelf will do!

You know what's troubling me? What's the set of white books between the Golden Legend and the Broadview anthologies?

Following a theme, here's a link to a photo of my copy of Getting Medieval.

Argh! No, I don't even own a copy of Getting Medieval! Although I have met Dinshaw and had lunch with her after a talk once ...

Let's see -- the tree, which was once tree-coloured, lights up. I've had it for as long as I can remember, but one year it didn't make it back into the ornament box, and kept getting tossed into "Office Junk" boxes through several moves. I not no-one asked about the Happy Meal toys ...
The missing book was v.2 of Urkundenbuch des Klosters Fulda which had to go back to the library!

Alex Cohen said...
soo many confusig words about my bookshelf. I'm just ten! Are you guys nerds like my dad, JJ cohen?

I am very bored. I have nthing to read.

At this point I confiscate my son's laptop.

Oh my god, Michael Uebel's study is almost exactly as I imagined it would be--that is too scary [but beautiful].

Karl -- those white books are the MLA "Approaches to Teaching" series box set of medieval titles, bought when I was a grad student. You know, those should probably go to my office at school, come to think of it. But then, my shelves there are very limited.

And Kid #1 is reading Michael Chabon?! OMG! I feel so inadequate!

Karl -- our shelves *are* strangely alike, especially considering we work on different things.

As for Michal Uebel's shelves -- they're so tidy!

Kudos to Kid#1 for reading the Silmarillion I didn't read that til college so he's got me beat... I was working on my Agatha Chirstie and Victor Hugo obsessions in high school.

I feel very out of place. The pics I sent JJC only include one bookshelf, college housing equals limited space and thus creative shelving. And that's not even most of my collection either. I had to leave most of it at my parents house. I miss my classical books! I miss my Sallust and Seutoneus and... and sadly I'm even missing Cicero. And I don't even like him...

Dr V: Summerland actually is a kid's (or young adult's) book, though believe me adults can enjoy it. Kid #1 read it last summer. He thought it was "an interesting mix of fantasy and nonfiction."

RaeRae: Kid #1 just finished The Silmarillion. He thought it was "AWESOME but a little hard."

and you forgot the suitcase. i also banish my important tomes to a suitcase. the dangers of living in college housing! mwhahaha

silmarillion hard... slight understatement in my mind but then again tolkein is always a challenge

I find it fascinating to observe the various non-book elements available on these fabulous shelves of treasures. These range from the exciting throw-backs to the joys of youth (MacDonald's toys, Whinnie the Pooh) to noble bookends or statues (Lions and Gargoyles).

This entry, of all that I have read while trolling about this blog, has brought forth the most joy in my life. I must say, though I enjoy peering from a mere two or three inches from my computer screen at other fine collection, it makes me weep at the thought of my own books, packed away in shadows and dust.

Kudos to you all! And thank you to JJC for sharing the wealth.

Glad you enjoyed it, Leslie. It's been great fun to put together. And every bookshelf has been a window to an expansive mind.