The Slow Continuum That Proceeds in Your Absence: I'm In Love with Angelina Gualdoni 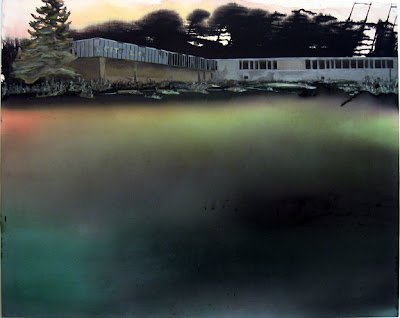 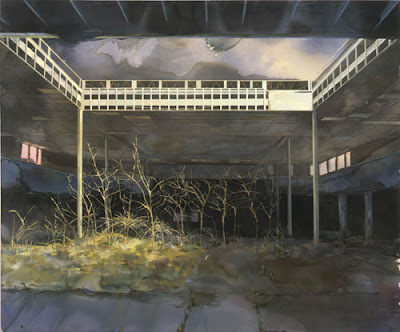 Every now and then you have an accidental experience of which you find it difficult to speak. That happened to me today. The last time it happened was winter of 1998 and the occasion was a retrospective of the work of the English painter Stanley Spencer at the Hirshhorn Gallery in Washington, DC. My friend Pam [Adelaide, Australia] was visiting me at my parents' house in Washington, DC and she had decided, based upon her current issue of Smithsonian Magazine, that she and I should go to the see the then-current exhibit at the Hirshhorn, "Stanley Spencer: An English Vision." I had never heard of him [never mind that he was a close contemporary of Lucien Freud and Francis Bacon--somehow I had overlooked Spencer], and I was feeling cranky about having to go, but by the time I left the museum that day I was overcome with emotion, especially because of Spencer's monumental Resurrection canvases [see here and here], which I have returned to again and again in my thought and work. I have never been able to let them go [similarly with the monumental paintings of Anselm Kiefer whose work I first viewed at the Tate Modern in London in 2004: go here for some of my mad ravings on that].

So today, here in Saint Louis, my cousin Keys comes to see me for a brief five or so-hour visit [on his way from Maryland to Indiana] and it's hot as hell here and my central air system broke down about a week ago and I don't know what we should do so I say, let's go to the art museum, because hell, it's air-conditioned! And there in the "Currents 100" exhibit room, where they feature the work of contemporary artists, are five paintings by Angelina Gualdoni [see second image above for "The Slow Continuum That Proceeds In Your Absence"], all of which feature "failed modernist utopias" [like abandoned shopping malls and Le Corbusier-inspired modular buildings which have fallen into decay]. From the exhibition catalogue:

Some of Gualdoni's work responds to the overwhelming scale and unforgiving materials of massive urban designs such as Oscar Niemeyer's city of Brasilia, Brazil and the recently razed Cabrini-Green housing project in Chiacgo. Another group of paintings concerns the 1999 demise of the Horizons Pavilion in Future World at Walt Disney's Epcot Center. . . . "I painted the demolition event as a slow inevitable," explains Gualdoni, "as if the building had given way to release its fluid miasma, the fruition of unmet expectations."

The titles of Gualdoni's paintings, like the paintings themselves, are both whimsical and sad, such as "The Site of Our Youth, with Wonder but not Nostalgia," which is based on a derelict mall not far from where she grew up. Indeed, Gualdoni's main subjects are out-of-business shopping malls, abandoned small-time theme parks, and decrepit [abandoned] modernist buildings. The paintings were haunting, beautiful, and sublimely sad. They struck me as apt visual markers for many of the conversations we have had here about utopias, the future, and possible worlds.
Posted by Eileen Joy at 11:38 PM

Wonderful. The titles are as beautiful as the works themselves.

I have two favorite DC art moments. The first was shortly after moving here, when a friend dragged me to a Bruce Nauman retrospective at the Hirshhorn Museum. His Clown Torture -- an installation you hear long before you see -- made me rethink the powers of the aural in art and no doubt is behind the Margery Kempe chapter of Medieval Identity Machines and my short preoccupation with "Medieval Noise."

The second involved taking the kids to some froufrou art exhibit at National Gallery on a day they both had off from school -- I think it was "Cezanne in Provence" or some such. The two year old was oblivious to it all. The nine year old was vaguely appreciative of the wide color palette, but grew bored quickly. Then we dashed over to a smaller exhibit that I'd wanted to see, on Surrealism and the War. Creepy as it was (the context intertwined the war wounded with the contemporary art obsession with mutilation, the mechanical and disfigurement), this exhibit really captured the attention of Kid #1. To think that art could -- instead of being respectful and faithful and beautiful -- lift its middle finger and return to the world the story it didn't want to hear about itself was eye opening for him. It made him an art lover.

Great stories, JJC. I love stumbling on art exhibits by accident. I checked out "Clown Torture": funny, then not so funny, and I guess that was the point. For some reason, it reminded me of the very painful documentary, "Capturing the Friedmans" [the oldest son was a clown-for-hire at parties in Manhattan, but after that film I'm sure his clown career ended].

When experiencing the Nauman installation live, there is NOTHING funny about it at all -- it is completely filled with dread, horror, unease. Even the constipated clown on the toilet, whose screams are absolutely chilling ...

Capturing the Friedmans featured the saddest clown I've ever seen. That was quite a film.

Caveat: nothing smart below.

Capturing the Friedmans featured the saddest clown I've ever seen

Surrealism bears much of the responsibility for my getting into literature. I discovered interpretation at a piano lesson when I was 8 or 9. My teacher had a book (maybe a binder) containing full-page allegorical illustrations for instruction in Christian doctrine and morals. Glosses followed. Think of something like this exemplum, but even more complex. When I discovered Surrealism, I discovered something that refused the 1:1 puzzling out of interpretation that had so pleased me while I waited for my brother to finish his lesson; I discovered something that just kept me going. From there it was a small step to literature and so forth.

And, funny, I love Bacon and Freud, but I've never heard of Spencer. So there you go, EJ....and then he looks at the paintings in more detail. I've seen his work in London. Quite familiar. Stunning. Will read your Kiefer essay soon.