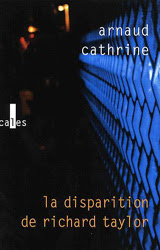 I love the idea of this book. A French novel that unfolds entirely in England, with quotidian English characters who eat mushy peas and pork pies ... but who speak only in French (in fact those two foods are some of the very few English words in the book). Lucy Dallas writes of Arnaud Cathrine's La disparition de Richard Taylor in the TLS

The novel is pitch perfect; the absurdity of these British people speaking in French soon fades away, though perhaps it contributes to the unsettling atmosphere. ("Lost in London" 27 April 2007)

Something about this act of reverse translation and its estranging effect is certainly related to our little thread on wonder ... as it is to thinking about the compelxities of what it means to be English in an England that has ceased to be very English.

I've been ruminating over how contemporary writers in England narrate -- or assume, or critique -- life in the changed nation as my department initiates a new British Writer in Residency program with a transnational Britain focus. Nadeem Aslam will be our first guest, giving me the impetus to read -- finally -- his Maps for Lost Lovers. I suppose the project I was formerly calling Infinite Realms is the medieval symptom of all this.
Posted by Jeffrey Cohen at 1:20 PM

You could ask the same question about the US or India? But really I find it hard to answer your question because I am here and I am 'English' (kind of - as much as anyone is) - and I find it hard to guage what you mean by 'English'. (there again I have spent all day annotating lists of 12th century 'English' who seem anything but Anglo-Saxon).

Tell me what you think Englishness is - and I'll tell you whether I think it feels like that to me now.

Does your question reveal a seeping nostalgia - a secret yearning to live in the Shire?

No, just the opposite. I think it means giving up on the dream of living in The Shire, a dream that was impossible from the start. It means acknowledging the cultural hybridity, diversity, messiness that a homogenizing proper noun like English tends to obscure, the disparate histories and desires it tends to hide. Really I am trying to be aggressively anti-nostalgic, emphasizing the difference that has always made "English" or "Englisc" or "Angli" or what have you a designation that hides more than it reveals.

You could certainly ask the same question about the US, and get similarly conflicted/conflicting answers. Does it matter that one nation was built upon a melting pot metaphor and the other not so much? The quick answer is likely no ... both combine in their populations desires of assimilation and conformity (and forced harmony) with desires for separateness, difference, even conflict.

That makes more sense in the light of what you do - an England that never was very 'English' in the first place.

The multicultural roots of England are everywhere in the media at the moment(and in academia). There have been a series of TV shows which test people's DNA (or trace their ancestry) to prove how diverse and fluid English society is and always has been. And the same interests have been reflected in Booker prizes and the like for a couple of decades or so now (Midnight's Children for example).

Today the BBC news is all about the government's plans for celebrating Britishness (rather than multiculturalism) and the most popular date for the proposed new 'Britain Day' public holiday would be 15 June, apparently, the anniversary of Magna Carta (hardly a British event). New tests for British citizenship, a written bill of rights, and more money for training 'English' mullahs - are also in the news reflecting a very deliberate re-casting of multiculturalism by the present government.

There are pressures to rediscover Englishness in the wake of devolution to Scotland, Wales and Ireland. And continuing debate about whether Britain is part of Europe or still tied by its so-called special relationship with America.

So I think the agenda - rightly or wrongly - is already moving on from cultural hybridity - to questions about 'belonging' where maybe ethics and even love(your other project) is more to the fore than roots, or language.

I wonder where this obsession over being one nationality came from. You could trace it back to nationalism and its roots but at the same time when you look at the classical period when identity was much more fluid and nationalism not necessarily as big a deal as it would become in the time of the revolutions you still have this insistance on being part of that one nation. So where do we get the desire to be that one thing?

Is it part of an innate desire to belong? Have we always been that desperate to be a part of something? Or are we that desperate to define ourselves as not part of something else? We are not that which we despise or fear. Is is human nature or human desire to define ourselves against the other and therefore insist that we are that one nationality or that one thing that stands against that other that we despise or hate?

Muslim perspective
What Britishness means to some in multi-cultural Britain

This gives you the flavour of the some of the debate. Of course there are some links between this and nineteenth-century nationalism but most of the protagonists (including those here) are careful to distance themselves from using that language.

A lot of it is to do with not throwing petrol bombs at each other or blowing each other up - there's a pretty good history of that here over the last forty years or so. If belonging is an alternative - let's join Adams and Paisley and try it.

From that BBC article:
Most of all, to be British, for Mr Mogra, is being tolerant and respectful towards others while at the same time being able to embrace and celebrate difference.

That's not much to build a definition of Britishness upon, and doesn't really distinguish Britishness from other kinds of tolerant cosmopolitanism ... AND, I would think, doesn't actually reflect historically what it has meant to be British. I can see the desirability from a governance standpoint of having massive national assent to such an idea (what a peaceable and happy ... dare I say united ... kingdom that would make), but it does seem more of a wish for good citizens than a description of some actual, pre-existing Britishness.

citizenship is vexatious - a touch too utopian for me.

i've always liked the idea of Britishness though precisely because it is such an empty and rather meaningless vessel. It allows me (personally) to be a little bit Irish, Scottish, Welsh, English, Jewish, Italian, Phoenician, catholic, freethinking, European and anglo-american all at once, or in any combination. It's about plural, complex and non-linear histories and herstories. And waiting for Mohcen and Tim to come back from playing basketball in the park in the dark. And skyping SO in dublin. And counting sheep in suffolk - yes especially that - and hedgehogs late in the still-light evenings on the eve of St William's day.

My favorite cultural touchstones for what Britain [or maybe just London] is today are the films of Stephen Frears, primarily "My Beautiful Launderette," "Sammie and Rosie Get Laid," and more recently "Dirty Pretty Things." Of course, I don't live in England, so what do I really know [in the way srj would know, but Frears is British so I trust him and love his films [note that I did not mention "The Queen," a film I found truly . . . boring]. Politically, I lean toward the kind of radical cosmopolitanism Kristeva writes about in "Strangers to Ourselves" or the "holy anarchy" John Caputo writes about. Ultimately, "being English" is almost anything you want it to be [as srj beautifully illustrates], but isn't it also about "being somewhere in particular"? And where is that? It is part landscape, part history [as still materially present in visible, tactile ways], and part memory [true and false], maybe?

Eileen, Thanks and yes - when I teach and research the medieval 'English' the 'local' (imagined often through landscapes) always seems immensely important and the source of even more (human) diversity than issues such as race, religion, language or political History.
Sarah

Yes, the local ... most certainly the local. That's what I became obsessed with in my Norwich project: how to think outside of huge communalizing concepts like the nation, concepts that don't necessarily have all that much quotidian import for the lived experience of most. In Norwich c.1100, for example, it seems to me far less important that some Norman had seized the throne several decades ago than that, here and now, a bishop was smashing down local homes to build a cathedral and cloister on a scale that had previously been unimaginable. The vey sky was being colonized; the perspective city dwellers now had on themselves had certainly to have been changed.

That gives a lot of variables (of sameness and difference) to consider historically and in the present. 'Tolerance' is the present sameness that is most often advocated here - and it is interesting that JJC and the American Muslim leader commenting on Britishness find that inadequate - not sufficiently or distinctively 'British'.

Which suggests that national identities might be most important to 'aliens'. The further you are away from a nation the more you desire an exotic and alien sameness for it.

I used to generalize wildly about Americans until (a) I went there and was amazed by what I found and (b) worked in a place where around half my colleagues are 'American' and vehemently rejected any, even tentative, stereotyping.

Richard Handler, Nationalism and the Politics of Culture