When I first saw in today's NYT that someone had dyed the waters of Rome's Trevi fountain blood red, I thought: "It's a clichéed commentary about the Iraq war." Then I read the following: 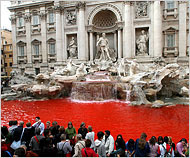 As soon as it was clear that the 18th-century Baroque fountain had not been seriously damaged, intellectuals and art critics began reconsidering the gesture as something nearing genius.

“Once the indignation had died down, we rediscovered the Fountain of Trevi,” said Roberto D’Agostino, an Italian blogger. “It’s a resurrection of Andy Warhol, the act of highlighting an object of mass consumption.”

A box found near the fountain held leaflets signed “Ftm Futurist Action 2007,” a reference to Futurism, the early 20th-century art movement that advocated a violent break with the past. The fliers said that the act was, in part, a protest of the cost of the Rome Film Fest, which runs until Saturday, and that the color referred to the event’s red carpet.

It is a lackluster festival, said a media critic, Gianluca Nicoletti, “with no depth, no color.”

The red of red carpets? A condemnation of a lackluster film festival? I think I prefer the clichéed Iraq war commentary. But then ...

Photographs by tourists and a video captured a man, baseball cap pulled low, flinging the dye and hurrying off. News reports have identified him as Graziano Cecchini, a 54-year-old artist.

In a telephone interview on Tuesday, he was asked if he was the man in the photographs. “Who knows?” he answered.

“If it had been me, wink wink, I’d say that this had been a media-savvy operation in the face of a very gray society,” he said.

He said he had taken refuge in an undisclosed location with the photographer Oliviero Toscani, known for his bold, iconoclastic work for Benetton clothing.

“We see the same thing,” he said, citing a comment by Mr. Toscani about the fountain’s new color in the newspaper Corriere della Sera, “Rome that’s still menstruating, Rome that has not entered menopause yet, can still have children, is still fertile.”

For more on this topic, see this post, a review of Peggy McCracken's work on blood, a book that does intriguing things with medieval silences around menstruation. For a moving meditation on how a female artist might attempt to speak something unbearable through bleeding upon her art, see Joanne Leonard's photoessay in Discourses of Sexuality: From Aristotle to AIDS. Both these works are personal favorites; Joanne Leonard is in fact an artist whose work has been inspirational to me for a very long time. We even once collaborated on a failed project called Imaginary Geographies.