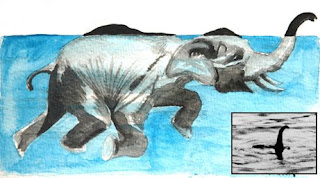 (I've been wanting to write about LJS's chapbook for about a month now -- a moment's rest in the rush of the end-of-semester madness made this finally possible. As some of you know, LJS is frequent commenter at In the Middle -- and I can't recommend his work highly enough. He's also a colleague of mine in the Columbia English department's Medieval contingent, and a fellow Anglo-Saxonist. That might be why it was a bit strange writing about him in the third person! I have to confess, I don't know how to write a poetry review...thoughts and comments welcome! The image is from national geographic, and illustrates another Loch Ness Monster theory. Seemed a good match.)

Reading Lytton Smith’s chapbook Monster Theory is a bit like stepping into a memory you’d forgotten. At first the reason seems obvious: in a book where so many poems take cues and even characters from the world long past, of course you’ll find something in it that is eerily familiar, whether a “Book of Encouragement and Consolation,” a “Charm Against the Loss of Crops,” or even a “Monster Theory.” However, on second approach, this strange familiarity becomes just that -- strange, but in the sense of the French étranger: foreign. If there is a memory here, it isn’t something entirely of the reader’s making. It’s at that moment, in the recognition of that which isn’t precisely recognizable, that the poet’s spell begins.The sense is that this book requires – demands – our complete attention, and moreover, demands to be re-read, even in absence. This little book of poems haunts the reader who lets its language speak to her.


Throughout the book, the poet asks for an gesture of imagination from his reader, and from the first a point of entry is established: “Bury your eyes in late barley,” opens the first poem, called “Scarecrow Work.” With this opening it becomes clear that there is a relationship forming, a world the poet constructs of language which, while it seems to be reveling more than revealing, will show the reader something that exists beyond the glittering surface of its words. Repetitions, particularly of verbs, seem important here, as in the last stanza of “Scarecrow Work”:

“…Your lesson: what will not scatter is safe, /
Is dove, is olive return.”

The centrality of the poem “Monster Theory” to the chapbook which bears its name is well placed. A poem not unlike the patchwork [monster] it speaks, the work performed by each section of the piece stands in for a larger analysis of what the [monster] patterns, promises, reveals and conceals. Though the first section reminds us that “It is always at an outset a displacement—”, the bracketed [monster] moves quickly through that displacement and into a stunning soliloquy that closes the work. The poet writes of a village, a cartographer, a lost daughter, a gathering search for a monster which refuses restraint or removal (the almost playful lines of the fifth section enumerate the ways the [monster] thwarts any attempt to prevent his escape: “Cauldron of boiling water: stench, but not of burning flesh. /Buried alive: Why expect so much of wood and soil?”), and the rendering of the [monster] as myth (“two anxious and too young sentries posted at the cave entrance…” mark a particularly lovely line in the third section), until finally in the seventh section we see the [monster] speak. Though in dialogue with what we presume is the daughter he snatched away, the [monster’s] words are the only voice we are allowed to hear. We are confronted with a [monster] who seems to know his place, and this is where the poem’s provenance becomes strikingly clear. Inspired by the essay “Monster Culture (Seven Theses)” by Jeffrey Jerome Cohen (the introduction to a volume of collected essays called Monster Theory), Smith has retained some key phrases from Cohen’s article, and this lends the [monster] an eerie prescience, a theoretical take on lives human and monstrous which approaches a kind of philosophy of monstrous purpose: “The monster exists as harbinger to crisis, / devil’s advocate to the identity.” It becomes clear, however, that when this [monster] is allowed to speak, another aspect of human identity is at stake, and with language, this focus lends light to other work being done by these poems:

This sense of the body -- human or not – which simultaneously gives voice to and is voiced by language, is what Smith seems most interested by in so much of his poetry. The intersection of language and body, his poetry tells us, can be painful and profound.

“Annuls the Space/Time Experience” is one of the moments where the intense pain that language can cause is brought out most beautifully in the text. “Is this the dream of language,” the poet asks, and then confronts the reader with the possibilities: “a trap with rusted hasp (suggests escape / but offers teeth)” The musical beauty of language is not forgotten either, and in another moment of the same poem, we are offered these lines:

is love of lair, the lyre a stringed bereft
of am, the lure just that, another dream
of language much as fluid as adrift…

The progression from lair to lyre to lure is particularly musical, and its setting in a poetic meditation on language is particularly appropriate. And yet, in spite of (and perhaps because of) the beauty of such lyric lines, the poem concludes on this haunting note:

“…we’ve fallen for our absents
and this is then the dream of language,
of those who’ve left, and left us with their absence.”

Those who’ve left, and left us with their absence – returning to this line, repeatedly, the haunting beauty of that which isn’t present (and so must be represented in language) is what it seems Smith is most adept at rendering. And of course, it is where bodily presence is least possible that it becomes all the more pronounced.

In a particularly bold poetic move, the poet writes in the voice of Eva of Wilton, the intended recipient of Goscelin of St. Bertin’s Liber Confortatorius. In “The Book of Encouragement and Consolation,” this young anchoress, who is only known through a letter she may have never received, and the voice of a man, Goscelin, whose love for her may have been implicated in her removal from St Bertin to Wilton, is given her own chance to respond. The embodiedness of her language – “(tongue / composed, the restrained throat forgotten / as threshold)” – as represented in the text is striking, and we remember that silence is an absence which implies a presence, and so lasts “only until its next breaking.”

Despite the deep ambivalence that becomes clear in terms of what “dream of language” we might ultimately embrace, the poet implies that this isn’t the end. If, as in “A Manual for Weather,” we are reminded that “All that is left of weather / Is how it is written…” and if we might (as with a bracketed [monster]) exchange the word “weather” for other words, Smith’s poetry envisions this status as one of hope, not desperation. If language cannot be fixed, or static, therein lies its beauty, its hope – its ability to live beyond us. Lytton Smith creates a world in which words are more than simply memory, and he invites us to leave our preconceptions about language and its myriad uses at the door. At the end of “A Manual for Weather,” positioned as it is at the end of Monster Theory, we are granted the grace of an unexpected arrival:

Welcome, friend. Leave your instruments
at the entrance. We live between weather
and earthlight: there is no use for them

here, no music without weather. Pitch
nor oscillation, string nor wind nor voice.

The poem ends where we do – at the limit of what language can represent. The final line goes out almost like a prayer – and a remarkable chapbook ends with what peace a world of language might finally give:

Silence, and words folding into it, enough.

Thanks for posting this, MKH. It is difficult for me to describe Lytton's poetry -- Laurie Anderson meets Seamus Heaney, maybe? And by that I mean that he -- Heaney-like -- loves fitting well-chosen words (nouns that open to a thousand resonances) into perfect image sequences; and he loves -- Anderson-like -- taking these sequences apart, imbuing his poems with what I can only describe as a mobility. It's wonderful to witness (and I use that word intentionally: I often feel like I am watching his poems unfold, rather than simply reading them).

Lovely review, Mary Kate; I think we can safely say that you can write about poetry [didn't we already know that?]. And congrats to Lytton for the chapbook fellowship award!