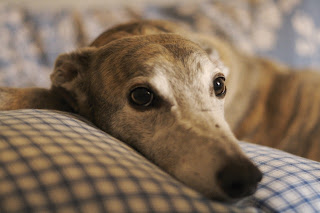 I met with an independent study student today about Sir Gowther. Without much luck, we tried to track Gowther's developing relations with dogs after the Pope demands he "eyt no meyt bot that thu revus of howndus mothe" (296). At an Emperor's palace, he "droghe" a bone from a spaniel, "and gredely on hit he gnofe" (355-6), and, when the Emperor's daughter places a loaf of bread in one dog's mouth and flesh in another's, Gowther "raft bothe owt with eyggur mode" (449). Subsequent encounters with dogs (512-16, 610-11, and 649) are vaguer about how Gowther eats.

To resist masochistic readings of Gowther and to lessen the humiliation of his penance: these were my desires, and they came to nothing. There's just something irredeemably wretched and, well, bestial about the Pope's alimentary injunction and Gowther's obedient food-snatching. And there's no development at all: Gowther and the dogs just don't get along. But this, however, is the case only at the Emperor's place. My student and I noticed that Gowther's first encounter with dogs violates the Pope's strictures: when he is outdoors, resting on a hill, Gowther receives his food as a gift.

Thre neythtys ther he ley:
Tho grwhownd ylke a dey
A whyte lofe he hym broghht;
On tho fort day come hym non,
Up he start and forthe con gon,
And lovyd God in his thoght. (Sir Gowther 307-18)

Far from a humiliation, this encounter is a moment of tenderness, an astonishing tenderness, really, for a narrative that otherwise swings wildly between sadism and piety, and more often that not, combines the two. In today's conversation, I identified this encounter as a utopic moment. For a time, Gowther is trying to do nothing; he is out of doors, out of all civilized organization of space; and for three days, he suffers--or, better, enjoys--a dog's charity. Only when he finally gets up and goes does he secure this charity to a proper, divine source. But before he substitutes a divine for a demonic telos, before he stands up, before he begins to make his way to a court where he meets dogs who, there, function only in a grotesque mimesis of animality, before all this, in that time on the hill, Gowther has found, with this dog, another way of being.

It's a pity Gowther didn't end at line 318, or even a few lines earlier.

(picture from here. I might have referenced the lovely Pippi too)
Posted by Karl Steel at 7:13 PM

Because she stands up like she's a figure in the Hereford Map (as most recently seen here, but also seen at In the Middle, of course)?

Hey it's a Holy Greyhound. Seriously. Just as in the materials gathered by Jean-Claude Schmidtt, this greyhound and Gowther create a dynamic, unofficial space where teleology fails, at least for a while. Just as the cult of Guinefort enables modes of ritual, practice, and, well, being that might otherwise be unavailable, this canine idyll also brings into possibility a middle space not organized towards penance, redemption, dreary and predictable pieties.

I'm not sur eit's utopian, but it certainly is welcome breather in a text hellbent on abjection and purification.

(while the second half might be kind of dreary, it's not TOTALLY predictable: after all, the princess just falls out of a window, plop!. I don't think I've seen anyone do anything good with that pratfall yet, BUT PERHAPS, thinking back to Gowther post #1, we can turn up the perversity in the piety of the princess by seeing her as scopophilic....?)

Are you kidding? The plopping princess is a predictable allegory of the Lacanian "falling into language." If she weren't mute, she would have been complaining about that fact throughout the whole romance.

Nuh-uh, now that I think of it, it's totally NOT Lacanian. It's uh....looks to his nearly finished copy of Dialectic of Enlightenment....a moment in which the Princess ("Reason") having perfectly organized the world about her, and thinking herself separated from it, falls into Reason's (apparent) opposite, Myth, a realm of mystery, undifferenciation, and fate! It's a Dialectical Plop!

Yesterday, the independent study student and I also had this conversation, no doubt not quite perfectly remembered: Me: "So, wait, why don't you like psychoanalytic readings?" Her: "Because they always end up saying roughly the same thing." Me: "You could say that, though, about any theoretical school: poststructuralist, Marxist, queer, even feminist, there are automatic versions of all of them." Eventually the conversation turned to what kind of criticism we do at ITM, and my response was, "I dunno. I'm in the middle of it all. We'll know only after the fact, or at least, only when it gets boring."

Spare me the AdornoHorkheimerian claptrap, Karl: the Princess Plop is clearly the enactment of Althusserian interpellation. Could it be more obvious? Geesh.

Good appoint about our eclecticism. One of the many things I like about the blog is how it opens up so many new books to me, and so many possibilities for framing analysis.

You know what's frightening? All of these readings *could* be featured chunks of their own articles (and, er, one of them already has been [as he checks his copy of Of Giants p. 137-38]). We might do "13 Ways to Look at a Plopping Princess"....

I love this post and the comment threads--thanks much ITM people. The tender and "humanizing" interlude (where the suspension of telology seems critical) brings to my (nonmedievalist) mind a midrashic tale concerning a spider who saves the life of the biblical David (who's hidden in a cave from Saul). Will read Gowther thanks to you all.

"Good appoint" = "good point." And I have nothing further to contribute to what should become "13 Ways of Looking at a Greyhound"!

OK, I will say something more, as I await a meeting about a student grievance (not against me!): Karl points out that I did talk about the tumbling princess scene in Of Giants. The interpretation there -- like many of the Lacanian-inflected interpretations in that book -- strike me now as too rigid and somewhat reductive. The point of the particularly chapter was to find mobility / lines of flight within a rather pious, rather conservative romance, but I'm not sure a Lacanian mode is the best way to open up a text. Maybe it is (and I think this is what I was trying to do) a good way to comprehend how a text shuts down certain avenues of interpretation and moves you towards a predetermined end.