What We Do: A Medieval Morning Hunting Papal Cats 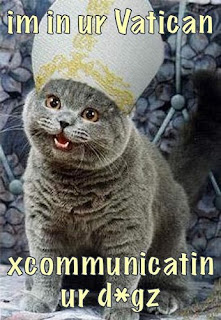 The local section of the NY Times reports that the current pope loves cats:

Though Benedict is the first pope to be written about by a cat, he falls squarely within a long Vatican tradition. According to “The Papacy: An Encyclopedia,” by Philippe Levillain, Pope Paul II, in the 15th century, had his cats treated by his personal physician. Leo XII, in the 1820s, raised his grayish-red cat, Micetto, in the pleat of his cassock. And according to The Times of London, Paul VI, pope from 1963 to 1978, is said to have once dressed his cat in cardinal’s robes.

I'm of course reminded of Yvain having his lion treated by the same maidens who tend his wounds, and of Edward I, who sent his sick falcons on pilgrimage (Robin S. Oggins, “Falconry and Medieval Views of Nature,” 50), and, more to the point, compelled to lose my next hour tracking down Paul II. One eighteenth-century history informs me that he is "said to have granted the cardinals the red hat" (C. W. F. Walch, A Compendius History of the Popes, London, 1759, p. 240). Interesting, but not useful. I get the sense that he's loathed by partisans for the Hussites and also by humanists (one humanist, Platina, repaid his suffering by sneering at Paul in his Vitae pontificum: note the defense of Paul II in the Catholic Encyclopedia). I'm given bad directions: after learning that a "Canensius" wrote a Vita Pauli II, I discover that this surname, well-known among Jesuits, might be spelled "Canisius" (or "Canensis" or "Cannesius"), and that his Christian name is Peter, or Paul, or, finally, Michael, who is not a Doctor of the Church. I learn, I hope finally, that Michael Canensis's (or Castrensis) Vita Pauli II appears in Volume III.ii, pp. 993 ff of an eighteenth-century history, the Rerum italicarum Scriptores ab anno aerae christianae 500 ad annum 1500 of Muratori (available, thank goodness, in our Eldorado, Columbia's Ancient/Medieval Reading Room). And, on occasion, not misguided by the Times' bibliographic ignis fatuus, I find firmer ground:

Some traces of the affection popes had for domestic animals have come down to us and they are all the more precious because they are rare. Paul II's biographer notes his exemplary compassion for animals and his horror at their impending death, which caused him to pity the farmyard animal and tear a calf, goat, birds, and chickens from the hands of his domestics or the butchers. Parrots, small dogs, and especially cats received a great deal of attention and were cared for by Paul II's doctor, Giacomo Gottifredi. This singular attitude earned Paul II one epigram in which the grief he felt at the death of one of his cats was mocked. (Philippe Levillain, The Papacy: An Encyclopedia, trans. John W. O'Malley, s.v., "animals," which I see echoed here: "He rescued birds from their captors and let them go free. He could not even endure to see a bullock being led to the shambles, but would stop and buy it from the butcher that its life might be spared")

Next step? Track down that epigram, which may prove the seed for an article simmering in my mind's backburner [Edit!: Block that Metaphor! maybe...the bouillon cube?], a piece on mourning for animals. I may also lean more heavily into the sodomy accusation against Paul II. Wish me luck, and share whatever research bug has recently bitten you: display your wounds!

(Creative Commons image from here)
Posted by Karl Steel at 9:51 AM

What do "we" do? Celebrate St George of course:

Love the bit about little Morley not giving in to big Leeds.

Never seen St George be this big before.

I love that bit about Morley too. When is it that George moves from being a patron saint into a national saint? I'd like to ask the same question about St Denis, and I wonder if historians of the development of 'national consciousness' have tracked saints to answer their questions...

I didn't mean to say that what I do is all what 'we' do. My main intent, other than just recording that morning's obsession, was to show what one medievalist does, since we were getting a lot of non-academics, I presume, given the trickle-down traffic spike (760+ hits) from Frank Rich's column, which linked to an Inside Higher Ed column that itself linked to a piece I wrote here several months ago.

Somebody has just proposed Aidan as a national saint for Britain ...

Don't worry the 'we' wasn't in response to what you wrote, but just a generic diffidence about using the collective pronoun.

reading some good stuff about cat bones just now by my good colleague TOC which IS more relevant to your post. If you'd like the details - just email me.