Yet Another SEMA Paper: Eros and Event in Malory's "Tale of Balyn and Balan" 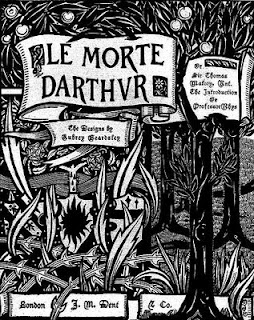 As promised, I offer here the paper I delivered [with a few modifications, primarily due to a comment from Fabienne Michelet] at the SEMA conference as part of BABEL's two panels on "Eros and Phenomenology" [about which Jeffrey said there was much eros and not much phenomenology, which I've been thinking about a lot, especially because, on many days, I don't even know if I can define phenomenology, at least, not in the way that helps me to understand whether I can do it, or am doing it, or not--I suspect not]. Indeed, one of the most interesting questions asked afterwards, by Jeffrey, was what each panelist [I, Anna Klosowska, Nicola M., and Jessica Rosenfeld, on the first panel] meant by phenomenology and the answers were varied and interesting [and maybe also confusing and contradictory?]. It would be interesting to see if we want to take a stab at that here one more time.

For me, phenomenology has always been the thing I have most wanted least to do with, and I have never been one of those [unlike Nicola] who love to read Heidegger and Husserl and to think about structures of consciousness, or about the thought of thought, or even, the appearance of the real-ness of the world in relation to certain structures of thought or modes of apprehension/sensing? I want to be like Samuel Johnson who kicked the table to prove it was there and not have to discuss abstract philosophy at all. And I don't know, either, about Heidegger's Being with a capital "B" [in which actual beings/persons are subsumed under or covered over by the emphasis on Dasein which becomes a kind of mystification]. But then it seems to me that, somehow, phenomenology is also [or becomes] about what I would call enworlded subjectivities, about being-in-the-world, bodies in relation to other bodies, and even about worlds-within-worlds [and maybe even, too, it is about elucidating something Yeats wrote, which Nicola reminded me of this past weekend, "there is another world, but it is in this one"]. So, for me, trying to think about phenomenology, at least in relation to what I am trying to do with Malory's "Tale of Balyn and Balan," might have something to do with tracing the outlines and momentary emergences of this "another world" that is "in this one." But I really don't know [yet].

In any case, I share with you here my SEMA ruminations. This is my third pass through this story of Malory's, and I would appreciate any helpful comments as I am developing this into a longer chapter for BABEL's next volume of essays, Fragments for a History of a Vanishing Humanism:

Eros and Event in Malory's "Tale of Balyn and Balan"

Great paper, Eileen, and greatly moving. I love its productive interchange with Kruger's final plenary paragraphs, although I can't articulate just now how that interchange works.

One small question for now. Given the bellicose sanguineous material you're analyzing, your list of philosophers of The Event--Derrida, Caputo, Deleuze--seems to require philosophers of the violence of the event (or the act? are they interchangeable? I don't know): Badiou (I think? know him only second hand) and Zizek and, yeah, Benjamin's Critique of Violence. Here is where Jodi Dean might help us.

I direct this suggestion, however, only at the middle chunk of the paper, since you take us, with Balyn's gaze into the forest someplace entirely new. If you want to keep pushing at the 'outsideness' of the forest, maybe think in terms of what I believe medieval etymology liked to think, that forest came from deforis, outside, and MAYBE someone even linked it to fors, chance or luck. Also see, while being VERY suspicious of the neatness of their structural analysis, Robert Pogue Harrison, Forests: The Shadow of Civilization. Chicago: U of Chicago P, 1992 and Eugene Vance, From Topic to Tale: Logic and Narrativity in the Middle Ages. Theory and the History of Literature 47. Minneapolis: U of Minnesota P, 1987, Chapter 5, where he discusses the forest.

Karl: thank you so much for giving me so much to chew over here and for the reading references. Since this is just a small bit culled from a larger book chapter draft [for our "humanisms" book], these suggestions are perfect and they don't necessarily pull me in a different direction since, both here and also in my Guthlac project, I am, indeed, trying to work out the violence [what, following Adorno and also Butler, I am calling the "ethical violence"] of these texts/created worlds. I have yet to read Badiou and have been meaning to. As to your help here with the realm of the forest itself: wow--thanks so much for that; it's like a gift to the chapter.

On forests and the wild, can I also add Corinne Saunder's excellent The Forest of Medieval Romance: Avernus, Broceliande, Arden. This book by Alf Siewers will be field-defining when it is published.

OK, that's a drive-by comment but I do promise to engage with the actual substance of your paper Eileen and have more to say soon.

My main caution with ANY forest book (barring William Perry Marvin. Hunting Law and Ritual in Medieval English Literature. D. S. Brewer, 2006) is that most of them don't emphasize, or don't sufficiently emphasize, the forest as a legal space (rather than, or as much as, a space comprising a certain kind of flora). I do think it's important to keep the two kinds of forests separate. Think SGGK: scary outside forest is what he moves through on the way to meet Bertilak; legally bounded forest is what Bertilak hunts in.