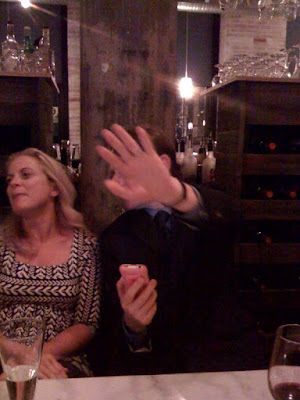 by J J Cohen
Speaking of obscure pagan deities, Michael Berubé is back. Check out his faith based initiative. Because he didn't offer a child sacrifice, it is unlikely his prayers will be answered.

So far so good at the SEMA conference. I attended quite a good Old English panel at which GW student Mike Smith talked about Cuthbert's folded body and prostheses. He (meaning Mike, not Cuthbert) was wearing running shoes as he spoke so he was clearly spooked at the possibility that the Q&A session would turn inimical (he hadn't sacrificed to Moloch yet either). Fortunately the post-papers conversation did not go to a dark place; in fact the conference has been filled with conviviality.

Mike Smith took the photo at right at an undisclosed location. An undisclosed plenary speaker is doing his patented "Talk to the hand / Photographs steal what little remains of my soul [which I am saving for Moloch]" maneuver. I believe he was eating a very fine soup made of leeks and goat cheese at the time. The impeccably coiffed medievalist to his right has clearly had enough of his mealtime shenanigans; she changed seats immediately thereafter (though not before he secretly replaced her iPhone wallpaper image of her adorable niece with a wacky picture of ITM's own Mary Kate, who was happy to assist). Also at this dinner the undisclosed speaker was forced to confess that nothing of what he says is actually funny; it is just so hurtful that people laugh at it as a defense mechanism.

I am looking forward to my talk today, though my insomnia- filled night featured a dream in which John Mandeville sailed to an island close to the earth's edge and found Sarah Pahlin lecturing naked Brahmins about energy policy. They listened serenely to lines that were supposed to be sassy but came across instead as overly rehearsed. One of the Brahmins snuck up behind Pahlin and untightened the bun in her hair, causing the time-space continuum to begin to unravel. This is not a political commentary. This is simply a restless sleeper's fevered dream, filled with the anxieties about apocalypse and end-times that he always gets before speaking to 263 people at a plenary lecture.

OK, room service just sent up the small child. I better get a-sacrificin'.
Posted by Jeffrey Cohen at 6:15 AM

The telling thing about your dream is that even Mandeville's skewed caricatures of Brahmins weren't absorbed by her folksy ways and winks. One question: could Moloch make Palin an informed VP candidate? And how many children might that take?

Great address, by the way. Not sure about the rest of the rogue's gallery of Lowell, Mike, Mary Kate, Liza, Dan, and Blaire on that row, but I lost time as you were speaking (how ironic)!

I'll have to track you and Karl down tomorrow to meet in the 3-D world before this conference is over.

I didn't sacrifice to Moloch because I thought *I* was going to be the child thrown into the fire.

re the shoes: you know my motto: "flight or flight." Besides, running shoes are pretty comfy, not to mention pretty handy when asked to RUN perilous errands (such as -- oh, i don't know -- running a forgotten pair of driving glasses across four lanes of fast-moving traffic to the owner).

But you're right. I didn't need the shoes, in the end. Everyone at SEMA was/are so nice and welcoming. Thanks, everyone!

Marcus: I second that. The address was great. Mandeville and Jeffrey ROCK.

Oh, and a special thanks to Eileen, who has created an amazing space, both virtual and physical, to share ideas and, more importantly, become friends.