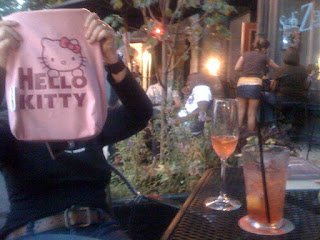 Figure 1. Eileen hiding behind her Hello Kitty bag at Sub-Zero in Saint Louis

The annual meeting of the Southeastern Medieval Association is only three days away and I think I can almost say I am almost ready for it [not to mention, pretty psyched]. Betsy McCormick arrived on Saturday to help me with last-minute organizing chores and we decided that the first thing we should do is spend all of Sunday shopping, drinking, and having one of those dinners where you think you see God and you have to be trundled out of the restaurant in a wheelbarrow. So we went to Target and bought stuff we really don't need, then we hit Bar Italia in the Central West End for paninis and Peroni beer and gelato, and then Left Bank Books where we fought each other over the one copy of Alberto Manguel's The Library at Night [I won], then we hit Sub-Zero, which boasts 200 vodkas and we did our best to sample many of them, and then we headed out to Niche Restaurant in order to indulge in the culinary wonders of chef Gerard Ford Craft, who Food & Wine magazine recently named one of the "Best New Chefs" of 2008. Needless to say, we closed the place down and were extremely sad to have to leave. On the way home, we listened at loud volume to the official BABEL mixtape for the SEMA conference, "California Soul," and we leave you with that mix here:

It is now time, of course, to get back to work and start running around like crazy women making sure no detail of the conference has been left to chance. To those of you who will be joining us in Saint Louis: we can't wait to see you. And to those of you who won't be here: what's wrong with you? 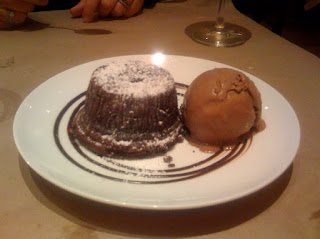 I am happy to be here and looking forward to seeing you both. You'd better have left some good food to nibble on somewhere!!

Oh don't worry, there will be plenty of food--we will take you to all of our secret places, but then if we lose you and you are reported missing later, we had nothing to do with that [and yes, this is related to those not-so-subtle threats you recently received from former students and other admirers who don't want you to miss their papers]. Insert smiley face here.

I'm sorry to missing out on what looks to be a *fabulous* conference. But I'm going to Paris two weeks after that (cuz I'm fancy like that) and can't handle too much travel in one semester (wallet-wise or sanity-wise).

That dessert looks like a lava cake to me. Did it have a warm chocolate filling in it?

That'd be an excellent way to finish off the evening after a few vodkas!

Okay, Greg, you're right--it was a kind of lava cake with a warm chocolate filling. And Dr. Virgao: did you forget to invite us to go to Paris with you?

This is definitely my kind of conference.

I'll be in the Beowulf hoodie, plotting a route to the vodka sampling :-)

I will now attest that the Vodka place (sub/zero) is well worth the trip.

Mea culpa, Eileen, I did forgot to invite you and the rest of the ITM crowd to Paris. I'll raise a glass of good French wine to ITM and blogospheric camaraderie.

I can't wait to see you all in St. Louis. I am really looking forward to the conference and comparing notes with Eileen on all my favorite places to eat. Pho Grand anyone?

Jeffrey has a new photo!