Another Reason to Study Old Norse: You Can Keep Up with Teen Lit 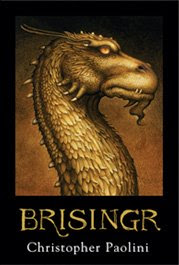 Although I did not go myself (I was in the Hermit Hut, working on a @#$%! Mandeville lecture), my son last night attended a Christopher Paolini book signing. Like all imaginative eleven year olds, Alex is a big fan of this guy's work. I'd been looking at the title of Paolini's latest volume, Brisingr, ever since Alex brought it home, discerning a vague familiarity in the word (to be honest, I seldom see my son's face any more: it is hidden perpetually behind this colossal book). Alex's big news about the reading -- other than the fact that Paolini is home schooled and, like, eleven years old himself -- was that brisingr is Old Norse. I knew it had a fiery resonance to it, and that masculine nominative ending should have been a giveaway of some sort ... Anyway, Paolini is apparently a big fan of Norse mythology.

Maybe I'll even read one of his books.
Posted by Jeffrey Cohen at 8:13 AM

Over the summer, when reading 500 page novels meant for kids Alex's age was kind of what I did in my spare time, I read Paolini's Eldest. I actually found the whole Norse thing a bit distracting -- it's like not-quite Norse, so I spent a bunch of time feeling like I should either look it up or correct the grammar.

But Eldest was a surprisingly good read. Then again, it has dragons -- what's not to love?

Is Paolini doing his own writing yet?

His own worst enemy said...

He always has.......
As for me, I have acess to an Old Norse -English dictionary, and none of the words quite seem to fit. :P