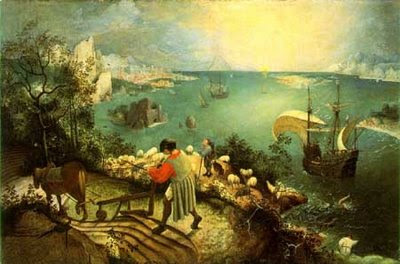 The anniversary of September 11, 2001, will be commemorated here in DC by the dedication of a new memorial at the Pentagon.

One of my students told me Tuesday that she'll be absent from class: she wants to honor her uncle, who died in that building. Since I woke up this morning I've been thinking about a former neighbor, David Charlebois, the copilot on American Airlines 77. He and his partner had a dog named Chance who scampered Meridian Hill Park with our own mutt, Scooby. Today I cannot shake the grip an image has upon me, a smiling three year old whose bench at the memorial is set at such distance from the other markers. Since the seats are arranged by date of birth, the nearest is that of his sister, age eight.

A poem by W. H. Auden, Musee de Beaux Arts, haunts me every year on this day. When we had a faculty meeting on September 13, 2001 -- the first time we in the English Department gathered after the events -- the novelist Maxine Clair asked if she might speak first. Maxine read the Auden poem in a voice wounded and powerful. Our eyes welled. She then asked us to turn to the person beside us, to look at them deeply, to see what was good. We cried, and we did.
Posted by Jeffrey Cohen at 7:42 AM

A touching post, to be sure. I remember how shocked I was the first time I saw someone "just walking dully along" that day.

You've inspired me to share what gave me perspective on "the human position" of suffering.

C.S. Lewis, The Weight of Glory:

War creates no absolutely new situation; it simply aggravates the permanent human situation so that we can no longer ignore it. Human life has always been lived on the edge of a precipice. Human culture has always had to exist under the shadow of something infinitely more important than itself. If men had postponed the search for knowledge and beauty until they were secure, the search would never have begun. We are mistaken when we compare war with “normal life.” Life has never been normal...Plausible reasons have never been lacking for putting off all merely cultural activities until some imminent danger has been averted or some crying injustice put right. But humanity long ago chose to neglect those plausible reasons. They wanted knowledge and beauty now, and would not wait for the suitable moment that never comes. Periclean Athens leaves us not only the Parthenon but, significantly, the Funeral Oration. The insects have chosen a different line: they have sought first the material welfare and security of the hive, and presumably they have their reward. Men are different. They propound mathematical theorems in beleaguered cities, conduct metaphysical arguments in condemned cells, make jokes on scaffolds, discuss the last new poem while advancing to the walls of Quebec, and comb their hair at Thermopylae. This is not panache; it is our nature.

Thanks Prehensel. That is quite a quotation, and not one with which I am familiar. Human life has always been lived on the edge of a precipice: something powerful inheres in those lines.

I thought so, too. It answered the question I--and a lot of us, I imagine--had in the days after 9/11, which was "What the hell am I doing? Why should spend this much time and effort on medieval texts when all this is going on around me?"

My mindset, however, was not aided by having read Book II of the Aeneid on the evening of Sept. 10, 2001. It was an odd experience to have gone to bed with it meaning one thing and to wake up with it meaning something very different (...and meaning quite another 7 years on). But I still can't read

"That was the end
Of Priam's age, the doom that took him off,
With Troy in flames before his eyes, his towers
Headlong fallen..."

without thinking of the WTC.

I love, Prehensel, the retroactive significance trauma gives past events, statements, readings. Mine was standing on my roof on 9.10, admiring the view, and saying to my roommate that the only thing that ruined it was the silhouettes of the WTC.

It answered the question I--and a lot of us, I imagine--had in the days after 9/11, which was "What the hell am I doing? Why should spend this much time and effort on medieval texts when all this is going on around me?"

Not me, actually. After being woken up and summoned to the roof to see the towers aflame, my first instinct was to turn on the TV--something I'd never done in this particular apartment--to see if what I was seeing was real. It was. Then I called Professor Bynum's office to say that I thought I might be late for her seminar: her support person wasn't in, though.

Only then did I start thinking about the Towers. When I taught (Eng 1) the next day, an 8am class, I changed my prompt from...something, I don't remember...to "what is the difference between acts of terrorism and acts of war?" I felt it was better to get at things headon rather than just to 'carry on,' say, shopping.

Wow. Not only had I spent a good portion of this day listing poems that have special significance for me largely due to the coincidence of my having heard or read them at precisely "the right time," but I also spent time remembering a professional colleague who died on flight 77 and, as it happens, was the mom of those little girls you mention you remember in your post. Thank you.