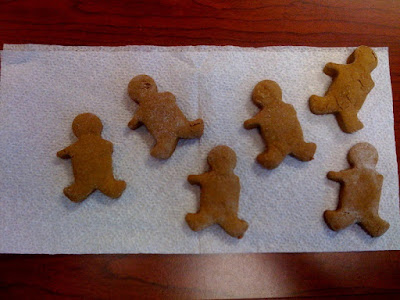 Spend enough time in academia and you'll find your office cluttered with those tchockes that kindhearted souls sometimes give to thank you for some kindness, to bribe you, or to bid you good riddance as they depart. The ledge around my windowsill features -- in addition to a Tiny Shriner -- a soap shaped like a shell, a soap with a picture of a moose, two gargoyles, a mug, a small skull, a stack of postcards, some bookends fashioned from polished chunks of blue stone, a Kenyan antelope, a tea box from India, and a tiki idol. Several of these items are gifts from former students; others are payback from colleagues whose travel authorization forms I signed. Today, though, I received an offering that is now my all time favorite: a plastic container filled with Grendel gingerbread men. Yes, one is arm has been lopped off each. You can glimpse six of them doing a little dance on the napkin on my desk above. Thanks, Lowell!

Here's hoping your grading is going well, and that offerings that bring great cheer are likewise wending your way.
Posted by Jeffrey Cohen at 2:25 PM

Yay for these little one-armed bandits... Yesterday, we had silver-coated almonds, panforte and little christmas-pudding chocolates, to be devoured while translating Havelok the Dane in our reading group. Hmm. Photos are going to be a little tricky today.

I LOVE THEM!!!! There's something to be said for totemically consuming he who consumed others.....

I'm guessing Lowell left *my* cookies in my mailbox and I just forgot to pick them up. ...Right?

The best would be if he left me all the spare arms. Would that make me Beowulf?

What would be truly great would be the spare arms dipped in a bit of red frosting at the shoulder joint.

Mike, that would really make you (a really, really young) Hrothgar. He got to keep the arm and then head (and didn't even have to get his hands dirty).

So JJC...do those cookies melt in your mouth? [sigh.]

I'll let you know if Lowell was that brilliant after I pick them up from my mailbox tomorrow.

For your birthday, I'm going to make a bunch of gingerbread men and crumble them up into tiny little pieces: less Beowulf and more Deleuzian becomings-molecular.

I will carry them home...in my teeth.

Here's the major problem with Grendel cookies: you can NEVER cut them with a knife. (Still this is better material than Rickles on Letterman last week.)