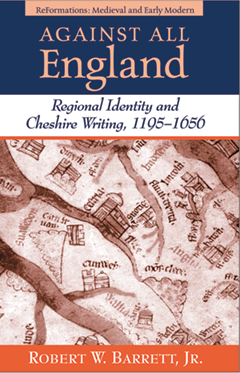 ... on the publication of his new book Against All England: Regional Identity and Cheshire Writing, 1195–1656.

Look for an excerpt here at In the Middle later this week. Meanwhile, here is the press write up:

Against All England examines a diverse set of poems, plays, and chronicles produced in Cheshire and its vicinity from the 1190s to the 1650s that collectively argue for the localization of British literary history. These works, including very early monastic writing emanating from St. Werburgh’s Abbey, the Chester Whitsun plays, Sir Gawain and the Green Knight, seventeenth-century ceremonials, and various Stanley romances, share in the creation and revision of England’s cultural tradition, demonstrating a vested interest in the intersection of landscape, language, and politics.

Barrett’s book grounds itself in Cestrian evidence in order to offer scholars a new, dynamic model of cultural topography, one that acknowledges the complex interlacing of regional and national identities within the longue durée extending from the post-Conquest period to the Restoration. Covering nearly five centuries of literary production within a single geographical location, the book challenges still dominant chronologies of literary history that emphasize cultural rupture and view the “Renaissance” as a sharp break from England’s medieval past.

Robert W. Barrett, Jr., is associate professor of English and medieval studies, at the University of Illinois at Urbana-Champaign.

Posted by Jeffrey Cohen at 5:52 PM