Michael Chabon and Me 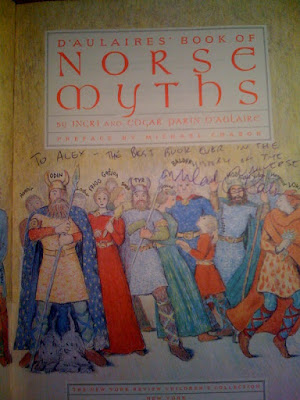 Among my favorite perks as chair of the GW English Department is the chance to spend time with visiting novelists.

Because so much of my own writing proceeds through slow research and diligent translation -- through processes that seem like patient peering through a microscope -- I'm fascinated by how a novelist crafts an entire world: what retreat from our own world is required? What embrace? Do stories emerge in their full contours before the words that convey these stories flow, or is plot an efflorescence that comes with the words on the screen? What are the rituals that enable writing? How much research enables an imagined world to breathe?

Nadeem Aslam spoke to me of his utter withdrawal from human interaction while composing Maps for Lost Lovers. Family members delivered meals while he slept. Even his mother was forbidden from telephoning. Suhayl Saadi described a more convivial mode of composition, embracing the odd spots of towns to spur his imagination, writing under more gregarious conditions. Edward P. Jones loves to tell the story of how for several years he has inhabited an apartment filled only with unpacked boxes, a computer, and stacks of mail. He sleeps on the bare floor, and possesses no furniture. He lives not far from National Cathedral, and so not more than ten minutes from my own house. I often offer him a ride home (he owns no car), and as I drop him at the intersection of Wisconsin and Mass. Ave I wonder about the monastic solitude to which he is retreating. Sometimes I envy it.

Michael Chabon came to GW on Monday, a speaker in a series that a generous donor has enabled us to create. Jewish Literature Live is a course that 35 students are taking with my colleague Fay Moskowitz. They read six works by contemporary authors of Jewish-themed literature, and then those authors visit the class to speak about their work. Three of these invited authors also give big public readings: Anya Ulinich, Art Spiegelman, and Michael Chabon. Readers of this blog know that I am a fan of Chabon's work, from his first book (Mysteries of Pittsburgh) to his latest (The Yiddish Policemen's Union). I have a soft spot for his introduction to D'Aulaire's Book of Norse Myths, a tome much beloved as a child; I posted on the reissue of the book a few years ago, when I purchased it as a gift for my son.

I met Chabon at his hotel to escort him to the class he would lead. This very copy of Norse Myths was tucked under my arm. I sat in the lobby and read the words of dedication I'd inscribed in 2007:

To Alex, This was one of my favorite books when I was ten. I hope you like it as much as I do. Love, Dad

That inscription transported me immediately to Cambridge, MA, in 2007 when I had stumbled upon the book in a local store. I was feeling guilty because instead of attending Alex's piano recital I was giving a paper at the place where I'd done my graduate work (a place that awakens in me all kinds of ambivalence, and sometimes regret). The gift and its inscription were my way of saying sorry to Alex for not being there. After I introduced myself to Chabon at the hotel, I asked him to sign the volume for my son. He smiled at my inscription then wrote:

To Alex -- The best book ever in the history of the universe. Michael Chabon.

I then walked Chabon from the hotel to the class he was to lead, nearly getting him hit by a car because I never pay enough attention to those little orange hands that are either saying hello or telling you to step out of the crosswalk NOW.

After the class ended I meandered a bit with Chabon, mocking him for drinking mocha frappuccinos and for possessing an iPhone with a vibrant pink rubber protective cover. We strolled by the White House and spoke of politics. In Lafeyette Park we chatted about fatherhood, and about how difficult it is to fail in that role ... because failure as a parent is as inevitable as it is heartbreaking. Then we met some students at an Indian restaurant and had a meal that made reaffirmed for me the deep affection I have for the young men and women who attend GW.

The newly signed Norse Myths accompanied me onstage later that evening. My job was to welcome the audience of about 300, and to play MC for the evening. Edward P. Jones was going to deliver the formal introduction of Chabon, but I wanted the audience to know why I had brought the two authors together. I opened Alex's book and read these lines from Chabon's preface to Norse Myths, some words about the trickster god Loki:

Ally and enemy, genius and failure; delightful and despicable, ridiculous and deadly, beautiful and hideous, hilarious and bitter, clever and foolish, Loki is the God of Nothing in Particular yet unmistakably of the ambiguous World Itself ... Loki never turned up among the lists of Great Literary Heroes (or Villains) of Childhood, and yet he was my favorite character in the book that was for many years my favorite, a book whose subtitle might have been How Loki Ruined the World and Made It Worth Talking About ... He was god of the endlessly complicating nature of plot, of storytelling itself.

Loki is, I offered, the patron deity of both Edward P. Jones and Michael Chabon, two authors whose work seems disparate only to a quick glance. Their novels, I suggested, were different versions of the same story. The Known World and The Yiddish Policemen's Union envision histories that never were, geographies that fade from every map as their stories close. Chabon and Jones conjure pasts that have never been, create time only to to lose that time, and yet these imagined histories are in a way more real than the present we inhabit, more truthful than any now can possess.

I didn't get home that evening until past 10 PM, a fifteen hour day. I had seen my daughter Katherine and my son Alex only briefly that morning: a messy-haired girl refusing to leave the warmth of her bed, a sleepy-eyed boy already packing his book bag for school. Both slept soundly. Both possessed that happiness that only children secure in their dreams can hold.

I placed the signed book next to Alex's bed for him to discover in the morning.
Posted by Jeffrey Cohen at 9:01 AM

Thank you for this. It's hard to tell what kind of effect childhood books will have.

When I was around ten, my dad gave me a nice hardbound copy of Edith Hamilton's Mythology. I ate it up. I loved the Greek myths, and growing up, I knew that if there was one religion I really wanted to believe in, that was it. They were everything bright and beautiful and sexy. I knew I wanted to learn Greek, go to Greece, and live in that world of Pygmalions and Odysseys...

Now, as those of you who know the book will recollect, there is also a section in "Mythology" on Northern myths. I read these too, and though somewhat intrigued by Sigfried and Brunhild, all in all I was rather put off by the darkness of these stories. I simply did not understand what anyone could want with these depressing tales if they had Greek myths at their disposal.

Fifteen years later, this has wound up being my field, and I *still* haven't learned Greek.

Grumble. I wish I could have met Michael Chabon.

Michael Chabon has been a favorite author of mine for a very long time, Jeffrey--I listened to "Wonderland" on audiotapes, which he himself recorded, a couple of summers ago, but I haven't yet gotten around to the "Yiddish Policeman's Union." Thanks for this post.

Readers of this post may also enjoy this piece by a GW student.

An amazing thing about Chabon is that, aside from gently mocking his frappuccino loving and pink rubber iPhone condom, there is nothing but I praise I can give: he is smart, likable, hilarious, human.

Also, he gave me the opening to use the word "penis" in front of an audience of 300 and I went for it.

A lovely and loving entry, Jeffrey.