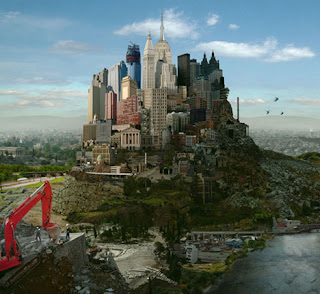 In the midst of the rich discussion following my last post, "Not Yet Living at the Same Time With the Others: Prendergast, Trigg, and Dinshaw on Medievalization and the Supernatural," Jeffrey commented that he often feels "stuck" in his "inability to wrap my mind around what people mean when they use the word ethics. It gets even worse when ethics and affect hold close company." Further, he cited Heather Love's citing of Lauren Berlant's essay "The Subject of True Feeling," where Berlant writes,

"What does it mean for the struggle to shape collective life when a politics of true feeling organizes analysis, discussion, fantasy, and power? When feeling, the most subjective thing, the thing that makes persons public and marks their location, takes the temperature of power; mediates personhood, experience, and history; takes over the space of ethics and truth?"

And then Jeffrey wrote [and asked],

That second question is the one that gets to me, especially because so much of the discussion here has yielded provocative glimpses of (true) feeling -- in gravestones washing by, in the admission of vulnerability when someone discusses your work, in the multiple assertions that though we have six or a million other things we are doing at the moment, we are still compelled to add more to this dilating conversation.

Feeling-affect-ethics-temporality. How do these align?

One of my initial reactions to this question was to simply claim that it was too big, too difficult to respond to in this forum [but: who am I kidding, really? because we talk about the alignment of these subjects all the time here, but, um . . . do we ever actually get anywhere? does it matter?]. I do not plan to try [again] to answer this question here [at this moment, in other words], but it did suddenly occur to me, this morning, as I was perusing the program for the Kalamazoo Congress this coming May, that BABEL's two roundtable panels were partly designed to bring the question of affect [more specifically: pleasure, happiness, enjoyment] into contact with the question of ethics vis-a-vis medieval studies and historicism more broadly.

Here is how I [attempted] to describe both panels last spring when I was gathering participants [and thanks to Karl, by the way, who hit upon the initial ideas for these panels when we are lounging about at the Kalamazoo Radisson last May]:

"Are We Serious Enough Yet? The Place of Ethics in Medieval Scholarship"

Ever since Michael Calabrese published his article, "Performing the Prioress: Conscience and Responsibility in Studies of Chaucer's Prioress's Tale," where he argued against what he called a "politically driven medieval literary criticism" and for an "Arnoldian disinterestedness," the question is raised [again] as to whether or not medieval scholarship is or should be a site for politically- and ethically-inflected interpretive approaches. This debate raises the very provocative questions of whether or not historical scholarship can ever be disinterested or unaffected by the sometimes very painful and traumatic episodes it investigates [such as anti-Semitic pogroms or the Crusades or slavery], and whether or not literature can be separated and investigated outside of history, and if so, in what ways? This panel will bring together scholars who have written and published what might be called ethically driven medieval scholarship alongside those arguing for the possible perils of such an approach, or for the pleasures [and even the ethical pleasures] of a different approach altogether. It is hoped, also, that this session will intersect with BABEL's other panel, "Are We Enjoying Ourselves? The Place of Pleasure in Medieval Schlarship," for we plan to ask all discussants on both panels to also consider the possible pleasure of ethics as well as the ethics of pleasure in scholarship.

"Are We Enjoying Ourselves? The Place of Pleasure in Medieval Scholarship"

For several years now, there has been a growing body of work, both in medieval queer studies but also in queer studies more generally [in all fields] on the practice of historical scholarship as a form of affective "touching" and "cruising" of the past and on "addressing history in an idiom of pleasure" [e.g. the work of Carolyn Dinshaw and Elizabeth Freeman]; more currently, new work is emerging, by non-medievalists and medievalists alike, on the pleasures [but also the ethics] of affective forms of scholarship and also on new temporalities that are opened by queer historiographies and queer reading practices [i.e., work by medievalists such as Glenn Burger, Karma Lochrie, Cary Howie, Anna Klosowska, and again, Carolyn Dinshaw], and by non-medievalists such as Judith Halberstam, Elizabeth Freeman, Jose Esteban Munoz, Jonathan Goldberg, Carla Freccero, etc.]. It is our intention to use this panel to highlight the voices of the medievalists who have been thinking and writing about affective scholarship, and to also bring medieval queer studies into contact with those working in queer studies who are not medievalists.

Our line-up for each panel is as follows:

Session #253: Are We Serious Enough Yet? The Place of Ethics in Medieval Scholarship (Roundtable)

* Stephanie Trigg (University of Melbourne) and Tom Prendergast (College of Wooster), "The Ethics of Trans-Pacific Collaboration"
* Hannah R. Johnson (University of Pittsburgh), "What Do We Mean By a Historicist Ethics? Some Reflections on Jewish-Christian Relations and Other Dilemmas of (Medieval) Historiography"
* Susan Signe Morrison (Texas Tech. University-San Marcos), "The Pleasures of Fecopoet(h)ics"
* Sol Neely (Purdue University), "Chaucer as Religious Seducer: Toward an Existential Postsecular Literary Theory"
* Daniel T. Kline (University of Alaska-Anchorage), "Before the Text"
* Carolyn Anderson (University of Wyoming), "Queering Ethics for Cowboys and Rodeo Queens"

Session #316: Are We Enjoying Ourselves? The Place of Pleasure in Medieval Scholarship (Roundtable)

So, just consider thus a shameless plug for the BABEL panels at Kalamazoo and for the rich conversations that will hopefully follow in relation to Jeffrey's crazy-tough question as to how, finally [or in any configuration, then, now, or later] feeling-affect-ethics-temporality might, or might not, "line up." A lot of great panels have been organized for this year's Kalamazoo, and over at the BABEL website, I have put together a page listing the details of the BABEL panels as well as panels I have designated as "BABEL-y": go here for that.

Also, mark you calendars for Thursday, May 7th, from 9:00 pm to 1:00 am, when BABEL will be hosting its annual party at Cityscape in the Kalamazoo City Centre, and where we can continue to argue about this while listening to the mixtapes of Karl the Angry Medievalist. Or we can just drink, be silly, and write bad time-traveling poetry together. Cheers.

"Are We Enjoying Ourselves?" Yes.

"Are We Serious Enough Yet?" Yes.

Roundtables dismissed. No need to hold Kalamazoo this year after all.

Thank you, Jeffrey. That will save me some time and money. So if anyone is wondering where I am this year at Kalamazoo, check the floorboards under the Burberry's on Connecticut Avenue in DC [as some may know, one of Tiny's hideouts and rendezvous points with Kate Moss].