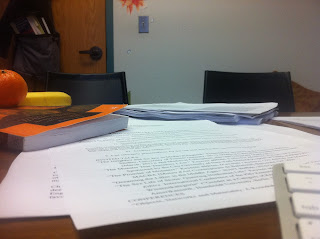 Two rituals of closure occupy me today: the final exam for my Chaucer class, and my faculty annual report. The first seems unusually weighty, partly because I have resolved never to teach the course as I've done the past sixteen (!) times, successful as that method has proven; and also because, if all goes as planned, I may not be administering another final until the spring semester of 2013, two years from today. That's a very long time. Eventually I'll blog about why that absence from schedule worries me a bit, but for the time being I will state simply: it worries me a bit.

My annual report is finished in draft. I'll clean it up during the Chaucer exam so that I can leave the document with my department chair before I depart campus. I'm happy with my classes. MEMSI has been funded for two more years. I was nominated for a teaching award, and received two fellowships, the ACLS and the Guggenheim. It's been a good year, with much travel: Siena, Toronto, Evanston, Cambridge, Berlin, Saint Louis, Barcelona, New York, Buffalo, Iowa City.

True, only one essay came into print (in this book, which appeared too late to include in last year's report). But I completed several pieces that are now in the publication process: "The Sex Life of Stone," for a collection on medieval gender and embodiment; "The Future of the Jews of York," for the volume coming from this conference; "Geographesis, or The Afterlife of Britain in England" for a Chaucer handbook (this one is on the black rocks of the Franklin's Tale); and "The Promise of Monsters," for a research guide at Ashgate. Very much in process are my abecedarium for this special issue of postmedieval (as well as the issue itself); an essay on medieval race for yet another handbook; another issue of postmedieval; an essay on giants for another monsters guidebook; a short piece on e-medievalisms for Literature Compass; an essay on queer stone that comes from the Berlin conference; and presentations of new work I'm giving in Melbourne this summer and at the Speculative Medievalisms conference in NYC in September. Whew. How I'll ever compose that monograph I've been funded to write is beyond me.

Looking back upon the past year as this annual report requires, I can see, though, that the writing and research that I've reported don't necessarily capture what has been most important. Four events that appear as scant lines on my form left a lasting impress. Organizing and being a part of this conference. The seminar I taught on Objects, Agency and the Constitution of Life challenged me to develop a more experimental pedagogy in the graduate classroom. A moment of crisis compelled me to articulate this credo, and I'm grateful for that. The blog form in which I framed and commemorated the accomplishments of each seminar-event also pushed me creatively, and I am happy to have composed those posts. But I'll get no credit on my annual report for a fiction writer (objects, wonder, lies); bride of all unquiet things; disrupts my reverie again; of angels and angles; the glimmer of fire portends;  we fuse like a family; and maybe it will all come back to me; there are powerlines in our bloodlines;  a low moon caught in your tangles; up the wolves; to turnings of the season; the heart that you call home. That's OK. I wrote those pieces for myself (even if I wanted to share them), in a form of my own devising: a title drawn from some resonant song I listened to the next morning as I walked to the subway station (I cheated by always starting with The Decemberists, with one exception), along with an impress of that day upon the post itself. I called them haiku but the posts weren't really that, just limited prose forms with expansive interiors.

The other two events that marked me deeply were both trips: to Berlin, my first time in Germany, where I learned much about commemoration and lived space; and to Barcelona, which filled the world with possibility.

OK, off to copy that final.
Posted by Jeffrey Cohen at 9:17 AM