please do not interpret 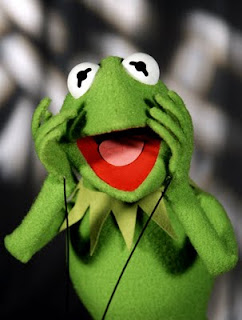 I had a strange dream last night. Perhaps it was caused by the fact that I've more on my plate right now than a small legion of superannuated scholars could accomplish in a decade, let alone the single month this lone superannuated scholar possesses to finish three essays and an abecedarium, draft a keynote lecture and compose the abstract of a second, and send a special issue of a journal off to press. Or perhaps it was the Dark and Stormies I drank with Steve Mentz last night during our wide ranging conversation about ecocriticism, family, job satisfaction, grad students we know, colleagues, beloved cities, life during a PhD program, recovery from that life, and many other things.

Anyway, last night I dreamt that I was in a theater seating 250 children and adults. For reasons I never questioned, I was in charge of mounting a puppet show featuring Kermit the Frog. I knew that I was supposed to keep the little sticks that move him invisible; not let anyone see that my hand was in his, um, well you know; and ensure that the audience was entertained. I quickly realized that the only trick in my arsenal was to run with Kermit along a low wall, making his feet go up and down as if he were riding a bicycle. That was all I could do, and after the third repetition the cheers of the crowd turned to restless annoyance. Yet I gave the amphibian-on-an-invisble-bike routine two more tries. As the boos erupted I woke up. I cursed Jim Henson, my stupid brain for generating such a stupid dream, and frogs in general, then tried to get back to sleep.
Posted by Jeffrey Cohen at 10:40 AM

No interpretation, of course, but a link to frog populations as ecocystemic indicators of health, or not.

It is difficult for me to feel sorry for these vanishing frogs, Steve. They bring that doom upon themselves with their infiltration of dreams. I know it isn't easy being green, but that doesn't mean it shouldn't be easy to obtain a good night's rest.

You talk about ecocriticism and then you have a dream about a character whose tag phrase is "It's not easy being green."

I've also worked in queer theory, and find my hand in this dream awkwardly placed.

Jeffrey, I love it that you know exactly how many children and adults were present.

Ignoring your pleas not to interpret I can only offer this: frogs usually prefigure the English conquest of medieval Ireland.

Ecocretinism, if you ask me.

all i can say is a warning...careful cursing jim henson. the cosmos is listening. and so is a big albino lion puppet, and all of gonzo's people gone militant in their exile...

All you need to do is look to your previous post for an interpretation. :)