I'm just back from a swift, intense trip to NYC to view the Lee Ufan exhibit at the Guggenheim. Ufan is  Korean-born artist whose work is deeply influenced by his time in Japan. His fame comes from two rather different media: monochrome and minimalist painting (tansaekhwa), and sparse installation pieces that use rocks paired with industrial products like steel sheets, metallic bands, latex and pillows. The strategic use of blank space in both kinds of art can be annoying: there is something too precious, too screamingly aesthetic about these pieces, especially because having stone stand for nature and steel for culture is just too easy. But the exhibit is also suggestive. Ufan speaks of creating ephemeral networks of relation that include the viewer as well as the surroundings. It takes a commitment on the viewer's part to participate in that network, but once that surrender occurs the art becomes vibrant. 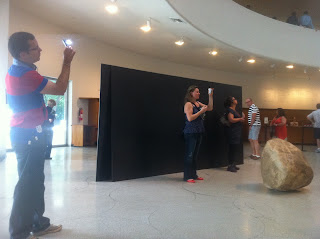 I learned this truth through experience. When I first started walking the exhibit I was underwhelmed. The pieces are modest and the museum is thick with summer visitors. I'd brought my daughter Katherine along with me, thinking it would make the trip to New York special for both of us. She'd been patient during the bus ride, and now I could see that she was wondering why the Guggenheim had been our destination. "So that's it?" she asked. "Just rocks on the floor?" She was voicing my own disappointment -- I must have expected a numinousness in the pieces that just wasn't there. To make it interesting I pointed to two stones that were separated by a metal sheet. "What do you think they are doing?" I asked. "What's the story here?" She rightly pointed out that the shapes of the rocks made it seem like they were peering forward, yet the screen and their own immobility ensured that they would never catch sight of each other. The piece seemed to be about yearning for something you are certain must be present, but forever out of sight and guarded from touch. Another installation was similar, but this time the second rock was under the seam of some metal sheets. Should the desiring rock ever be able to move forward, it would succeed only in crushing what it aimed to reach. Later versions of this series (most of them entitled Relatum, for things connected to each other), had rocks mischievously peeking from behind a screen, about to enter a ring for combat (said Katherine), or gathered in a circle and seated on royal pillows as if at some inscrutable parliament. You can discern from how I am describing these installations that what seems so still, so devoid of energy and motion, becomes as you walk around the pieces and start to link them to yourself and to narratives and to each other, metal and stone that is weirdly kinetic. The materials demand stories, and the stories grant them motion.

Of course, your reverie will be constantly broken by the museum guards, who with weary authority must repeat every few moments that the installations must not be touched. It is so natural for an onlooker to place a hand on the stone that despite the signs prohibiting this intimacy visitors perpetually forget.

My favorite moment was the exhibit's final segment, in a dead-end on the Guggenenheim's top floor. Not many people seem to make it that far; those who do behold only three tall museum walls that reach towards a small sky light. Each wall is adorned with a single brushstroke of grey paint. Ufan created these as site-specific versions of some of his famously stark canvases. I asked the museum guide who had been stationed to keep an eye on the walls what will happen to the three pieces once exhibit closes: would the drywall be cut and the strokes preserved? He told me no, they would be painted over. The artist never intended them to endure -- and indeed most of the stone installations were also transient copies of installations from elsewhere that would also be dismantled. Networks possess brief lives, even networks with rocks, but they create memories that persist, for a while. I asked the guide what kinds of questions people ask him, and he said most wanted to know if the skylight was part of the installation (it is not). Finally I asked him what he thinks about in that dead-end space, and he told me it was his favorite place to stand: serene, an end-point, an invitation, a place that would vanish soon, but a space that would haunt him afterwards for the time he had spent.

I wish I could have photographed the installations, but the Guggenheim doesn't allow pictures anywhere but the entrance foyer. I've therefore chosen to illustrate this post with one of my favorite scenes. Katherine and I sat on a bench and watched visitors enthralled by the museum's spiraling ramp fail to realize that they had become a part of one of Ufan's Relatum installations. Several bumped into the screen while snapping pictures of the ceiling. A harried guard was constantly reminding people that they were walking through art not mere metal and stones.

Besides re-learning how to live with and in art, another pleasure of this New York trip was Katherine's companionship. Despite our visits to the Central Park Zoo and Dylan's Candy Bar, the Guggenheim was her favorite destination: stories about the stones have haunted her since we started to imagine together what fables they relate. Her inexhaustible enthusiasm for pillow fights and jumping on the bed at the hotel helped us through a wet night that prevented much other activity. Two of Katherine's favorite people in the world, Karl and his wife ALK, were good enough to meet us in Central Park after the museum, and to have an early Indian dinner with us as well. For a weekend that focused upon stones, it was lively, powerful, and -- like those strokes of grey that Ufan left upon the museum wall -- not to be forgotten.
Posted by Jeffrey Cohen at 1:34 PM

I love the posts that include KEC or AC. One, it makes me long for, and get excited about, the days where I can have such shared experiences with my future children. And two, because I think young people are important to help us older people to think outside the box.

Beautiful post, JJC. One late night insight comes to mind, and relates to a thoughtful and encouraging piece of advice you gave me re: the difficult task of incorporating loved ones into the often arcane and uninviting world of academic thought; here is an example of theory mapped onto a physical and material space in which you and KEC both walk, interact, and interpret. An admirable departure from those typical moments of thinking merely with one's own language--it provides real room for and understanding by one's most important people.