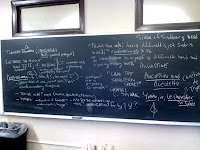 I couldn't have done better on purpose. Yesterday afternoon, my wife and I set out to join a couple ten thousand of our Union allies to march on Wall Street. Earlier that day, in my medieval senior seminar on eating, I taught Chaucer's Plowman portrait, Piers Plowman B.6 (the "Hunger" passus), and "God Spede the Plough". I told the students I'd be starting my office hours early so I could get out for the protest, gave a bit of CUNY-specific context about my going (I pointed to the blackboard and said, this one here, it's ok, but you know it's about the only decent blackboard on this floor), and then stymied an incipient discussion about contemporary politics.

Not that that did much good. What ensued was necessarily political. Everything(?) is, anyhow (always historicize! says the one; always de-correlationize says the other; sometimes they speak together), and it can't help but be when we're reading medieval texts about peasants. For Chaucer's Plowman portrait, for example, I asked the students why Chaucer had the Plowman work for free; why he omitted the coercions of the landowners; and why the second line of the portrait links him with "donge": here, I said, is an image that's at once one of production and disgust, delight in food (which the peasant brings) and disgust at our reliance on the body and the labor of peasants (remember, I said, who would have been reading this text: not the 99%).

Then "God Spede the Plough." Here's the first stanza translated:

As I walked myself over wide fields
When men began to plow ("ere") and sow,
I saw how quickly farmers hastened
with their beasts and plow all in a row.
I stood and saw the beasts well yoked/used
To plow the land that was so tough;
Then to a farmer I said this saying,
"I pray to God, may the plow prosper."

First I suggested that the last line, repeated at the end of each of the poem's 12 stanzas, might be operating like Shakespeare's "Brutus is an honorable man." Watch, I said, how the context changes the meaning of this only apparently innocuous line.

Then: who is this I and why do we need him? Why does the voice of the farmer require an intermediary? Spivak proved to be useful here: I proposed that the text thematizes the impossibility of hearing peasant voices directly. As in "French" feminism, the peasant cannot speak in this system and be heard as a peasant. Notably, the last stanza (ll. 89-96) shows this witnessing "I" completely missing the point of what he had heard. From the third to the eleventh stanzas, the farmer complains that peasants work, and work, and work, and one after another the rich show up to demand their cut. The land may be tough, but what's worse are the rich. Yet the final stanza, missing the entire point of the complaint, offers nothing better than be of good cheer. The event has not happened.

I focused on this stanza:

"To paye the fiftene ayenst our ease,
Beside the lordys rente of our londe --
Thus be we shepe shorne, we may not chese,
And yet it is full lytell understonde.
Than bayllys and bedellis woll put to their hande
In enquestis to doo us sorwe inough,
But yf we quite right wele the londe;
'I praye to God, spede wele the plough.'"

And yet it is full lytell understonde: the line teaches itself, yes?

I led them through two translations of the last 4 lines. The obvious reading: "Then bailiffs and beadles will take hold of us in inquests to do us sorrow unless we do right by the land: 'I pray to God, may the plow prosper.'" In a classic damned if you do/don't sentiment, the farmer says they'll be fleeced either way: if they prosper, the priest and friars and nobles will reduce them to penury; if they don't prosper, they'll be arrested for not paying their rents.

Another translation, with slightly different punctuation: "Then bailiffs and beadles will take hold of us in inquests to do us sorrow; but if we totally abandon the land, I pray to God, may the plow prosper." The complaint's now a threat: do wrong by us, haul us off to jail, and you will all starve. You need us. We are many; you are few.

Then I returned to Monday's class, when I taught Wynnere and Wastoure (translation here). Here's a closed argument between a miserly and spendthrift noble about who better serves the kingdom and their own souls. What their debate leaves out are are the workers whose efforts--not Winner's--stuff the granges to the bursting point. For this debate, workers are only subjects of charity, there to get by as best they can on the leftovers of Waster's excess.

If we read Wynnere and Wastoure from the anamorphic perspective of "God Spede the Plough," we see the truth of the matter: both these nobles are wasters. Both sponge off the labor of others. In sum: class means class war. À bas the 1%!

And then, not having taught a political class at all, I went to the protest. 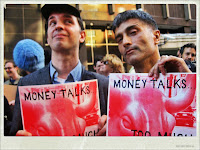 (here I am with my colleague Samir Chopra: some of you may want to read his most recent book, A Legal Theory for Autonomous Artificial Agents)
(and a big tip of the hat to "Vellum" for the twitter tag #occupythemiddleages)
Posted by Karl Steel at 10:45 AM

just yesterday i was reading helen barr, socioliterary practices in late med. england: chapter 1, on hoccleve, winner and waster, and chaucer. good stuff in this context.

And to pick up on your point about History - I think that is in exactly this kind of case that theory is extremely helpful, even essential for students/anybody. Does the analytical framework provided by Marx (or OOO or anybody else) sustain the historical comparison or explode it?