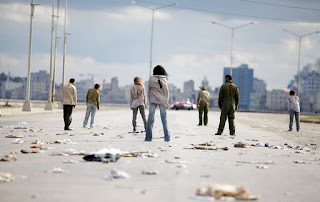 For a small speech I'm delivering somewhere or other, I've been collecting references to zombies. Or, rather, I've been noting that we have been so inundated with zombies over the past few years that attempting a comprehensive survey of the phenomenon and reducing it back into the stable parameters of a cultural meaning would be an impossible labor. That impossibility is what intrigues me, though, and has been the starting point for my thinking about the explosion of zombie apocalypse dreams. They, along with the Occupy movement,* seem to be among the few means we possess at the moment of thinking ourselves out of the stalemate of the present. Zombies are weirdly forward-looking -- relentlessly forward-looking, in fact. They are the monster through which our dissatisfaction with the immediate past and the stultifying present are expressed. They have to be multivalent: as enjoyable to imagine and inhabit as to fight against and destroy.

Despite their apocalypse-obsessed futurity, zombies carry with them much that is unspoken about the deep past. That complicated undead temporality, visible in what I am calling loosely a "zombie aesthetic," will be the focus of my Orlando keynote. I hope to use medieval revenants (especially the Old Norse draugr or aptrgangr, like Glam in Grettir's Saga) to think about contemporary siblings.

The epidemic of zombies has of course led to a proliferation of scholarly work on their signification. Much of this criticism argues that zombies are monsters indigenous to capitalism: aren't the ravenous undead, creatures of pure drive, perfect figures for the consumer? Ever since George A. Romero's ur-zombie film Night of the Living Dead, creditors and debts and the relentless creatures have been intertwined -- a knotting only intensified by the shopping mall action of Dawn of the Dead. That allegorical function makes a great deal of sense, but I've long suspected it is not the entirety of the revenant's story. I was therefore pleased to hear about Juan of the Dead, a Cuban film in which the zombies are socialists. From the wonderful NYT write up:


“Juan of the Dead” tells the blood-drenched tale of a slacker who decides to save the island from an invasion of cannibalistic zombies. As the zombies turn Havana into a gory circus of flying limbs and severed heads, the nightly news anchors continue to calmly assert the government line, that the attacks are not the work of the undead but dissidents in the pay of the United States.

The film is scattered with allusions to traumatic moments in Cuba’s recent history: Cubans flee the zombies in makeshift boats that recall the raft-borne exodus of 1994; the darkened, shuttered streets, one character says, echo the “special period” of economic hardship after the collapse of the Soviet Union.

“Cuban reality is so incredible that there are things in the movie that seem like you made them up, but in fact they are based on truth,” said Alejandro Brugués, the 35-year-old director, who was born in Argentina but grew up in Cuba. “I just put zombies in the scenario, instead of real people.”

So, what about you? Favorite zombies? Notable undead?

------
*Occupy might be the affirmative antidote to the cynical, zombified future. I'm sure the two phenomena are connected, perhaps with the former as the possibility-laden and hopeful vocabulary that the latter (more prone to comic cynicism and ultimately, despair) lacks.
Posted by Jeffrey Cohen at 8:11 AM

I have two particular favorites: Glam, whom you noted, and Thorgunna in the Eyrbyggja Saga. Her tale is noteworthy as it involves the only living creature more frightening than a draugr - a lawyer!.

Have you seen Fido? It explores the divide between living and living dead, specifically inter-existential(?) relationships and romance in a film set in the alternate America of the 50's following the Zombie Wars. Of all the zombedies, it is , by far, my favorite.

I have been wondering about the prevalence of contagion, particularly in film. Vampires and zombies have shifted from exemplars of the world of the undead revived by some unfinished business (as were the revenants in the Middle Ages) to representations of orally transmitted diseases, so to speak.

Say the revenant in William of Newburgh's Historia Rerum Anglicarum, chapter 22 in book V, does not revive because he was bitten by another "infected" zombie as we see in Shaun of the Dead.

Can we think, perhaps, that fear of contagion also is related to capitalism?

Yet, my very favorite undead has to be Carmilla by Sheridan Le Fanu.

Peter Jackson's Braindead (or Dead Alive as it's known in the United States) is a weird little zombie comedy, with the focus being much more on Oedipal tensions than post-apocalyptic ones. (It may turn out that those two things really aren't very far apart from one another, actually.)

It's also full of many splattery guts, which I think is another draw of the zombie: lots and lots of blood and gore. That's certainly not a new thing, but it marks the zombie as different from the other major undead monster, the vampire, which is less about bodily destruction and more about bodily transformation (through sex, of course).

I think Junot Diaz's semi-recent invocation of the zombie in the context of late capitalism and the Haiti earthquake is potentially relevant to what you're talking about, and pretty powerful regardless:

"This is what Haiti is both victim and symbol of—this new, rapacious stage of capitalism. A cannibal stage where, in order to power the explosion of the super-rich and the ultra-rich, middle classes are being forced to fail, working classes are being re-proletarianized, and the poorest are being pushed beyond the grim limits of subsistence, into a kind of sepulchral half-life, perfect targets for any 'natural disaster' that just happens to wander by. It is, I suspect, not simply an accident of history that the island that gave us the plantation big bang that put our world on the road to this moment in the capitalist project would also be the first to warn us of this zombie stage of capitalism, where entire nations are being rendered through economic alchemy into not-quite alive. In the old days, a zombie was a figure whose life and work had been captured by magical means. Old zombies were expected to work around the clock with no relief. The new zombie cannot expect work of any kind—the new zombie just waits around to die."

Full essay (but no more zombies):

Dead Snow is an interesting zombie film. Nazi zombies? Of course. A friend of mine claims that there's some political commentary in terms of Norway collaborating with Nazi Germany, but I'll need to get him to tell me about it again.

The Walking Dead (the graphic novel, not the tv show) is quite good, at least in the early going. Very little to do with capital, and has more to do with trauma and isolation. I'm also partway through Colson Whitehead's /Zone One/. Whitehead does go the commercial route, but keeps bringing in interesting language of man as machine, a machine that has broken down.

p.s. love your thoughts on zombie temporality. I might write something soon about monsters and temporality.

For those of you who read German, Tim Albrecht has a very good short essay on zombie movies, the definition of death, and animal/human experimentation in the summer 2010 issue of Kultur und Gespenster, starting on p. 272 (Link is here: http://www.textem.de/?id=2086 -- and you can download the entire issue as a pdf from a link right under the cover image.)

I'm biased because I happen to be married to him, but I think it's worth a read.

Being the sci-fi nerd that I (not very secretly) am, I'm especially fond of the Reavers from Firefly (TV) and Serenity (Film). That's more about dictatorial control than capitalism, though.

Pontypool was suggested to me when I was putting together a prospective syllabus for a monster movies course. New Canadian zombie film, and great. Really good performances, esp. from the shock-jock protagonist, and talk about "orally transmitted diseases," to quote Ana...

Due to my paralysing and un-exaggerated fear of zombies I haven't seen this, but I have heard many fantastic things about Charlie Brooker's Dead Set, which I believe depicts the unfolding of the zombie apocalypse from the perspective of contestants locked inside a Big Brother house.

Last week I saw Juan of the Dead (www.juanofthedeadmovie.com/lang/en/) and thought about your post here! It is a must see!