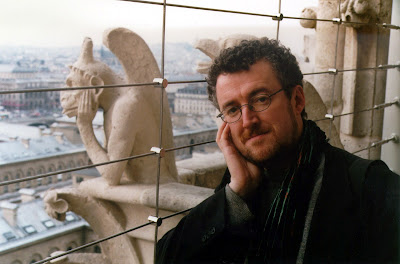 
. . . what do they all mean, those lascivious apes, autophagic dragons, pot-bellied heads, harp-playing asses, arse-kissing priests and somersaulting jongleurs that protrude at the edges of medieval buildings, sculptures, and medieval manuscripts?
--Michael Camille, Image on the Edge: The Margins of Medieval Art (1992)

Our most cherished cultural monuments are not the neatly packaged products of a distant and therefore irresponsible medieval past. Cathedrals are above all spectacular sites in the here and now, sites that are continually being reinterpreted, reconstructed, and interrupted by new monsters of our own making.
--Michael Camille, The Gargoyles of Notre Dame: Medievalism and the Monsters of Modernity (2009)

Myra Seaman, Holly Crocker and I are thrilled to announce the biennial Michael Camille Essay Prize, to be jointly sponsored by postmedieval, Palgrave Macmillan, and the BABEL Working Group. The competition will be open to early career researchers: those currently in M.A./Ph.D. programs or within 5 years of having received the Ph.D. (for the first award, that will include those graduating in 2007 or later). Essays in all disciplines are encouraged. The prize will be for the best short essay (4,000-6,000 words), on a variable theme, that brings the medieval and the modern into productive critical relation. For 2012, the theme is inspired by Camille’s last book on the gargoyles of Notre Dame: Medievalism and the Monsters of Modernity (conceptualized and imagined in any way the author sees fit). The award for 2012 will include: publication in postmedieval, 250 dollars, and one year’s free print and online subscription to the journal.

The prize is named after Michael Camille (1958-2002), the brilliant art historian whose work on medieval art exemplified playfulness, a felicitous interdisciplinary reach, a restless imagination, and an avidness to bring the medieval and modern into vibrant, dialogic encounter. In addition, we wish to honor Camille for his attention to the fringes of medieval society, to the liminal, excluded, ‘subjugated rabble,’ and disenfranchised, and to the socially subversive powers of medieval artists who worked on and in the margins. The prize is also named after Camille because his work was often invested in exploring ‘the prism of modernity through which the Middle Ages is constructed’ and because, as his colleague at the University of Chicago Linda Seidel said shortly after his death, he had ‘a mind like shooting stars.’

Deadline for submissions is June 30, 2012. Submissions will be judged by a panel of scholars selected from postmedieval’s Editorial Board, and the winner will be announced at the 2ndBiennial Meeting of the BABEL Working Group, to be held September 20-22, 2012, in Boston, Massachusetts. Please send submissions (as a Word document, formatted according to Chicago Manual, author-date style with endnotes + list of references at end) to the editors, Eileen Joy and Myra Seaman, at postmedievaljournal@gmail.com.
Posted by Eileen Joy at 11:01 AM

I couldn't be more delighted. It will come as no shock to any of you who know me that it was reading Camille's work that convinced me to become a medieval art historian, Image on the Edge above all else. This is a wonderful idea and a beautiful gesture. Thank you for doing it.
Best,
Asa

How wonderful! I will circulate widely.