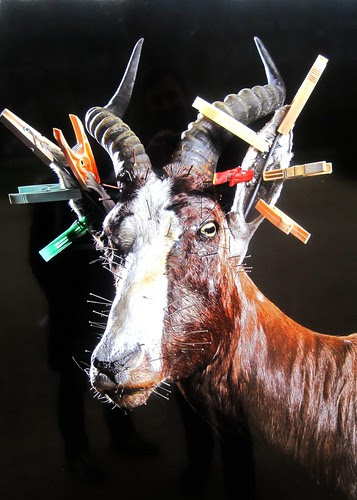 Hwaet, I mean, Hey! Read this first. SUBMIT. Very exciting. And if you've never heard Act III from here, do yourself a favor.

So. I've been away a while. With my blessings, please skip the following ritual auto-dressing-down, surely as tedious a feature of blog-writing as the speaker-for-hire's opening joke.
Again: so. I know others can teach 5 classes, raise a family, and publish a great blog and an awesome book (which I'm reading now when I'm not working my way through these), and do it all without cracking a beard, but not me. I taught 12.5 credits last semester (which will elicit either a "that's IT?" or "sweet Anubis, you poor fellow" or "can it, brother: at least you have a job job"), which made the last bit of the semester a bit of a tourbillon: that, plus a November that saw me giving talks (or receiving honors) to Urbana-Champaign, to Ann Arbor, from DC, or, after a fashion, to my inlaws in Newton, New Jersey. And then in December, when I wasn't grading, my wife and I packed, cleaned, and sublet the apartment, and, after two weeks' vacation seeing friends in London and Istanbul, we moved to Paris, which will be our HQ from now until this conference. Surely there's more I could say, mais--as I'm told on dit here, j'en passe, or, if you like, et patati et patata.

Excitement continues in my absence. This is both a properly Heideggarian position of ex-istance and/or, better, an ooo position of knowing that I'm the center only of my world. If even that. Some of the excitement, which you must have already experienced, include Eileen's harrowing, that is, her renewal of her ongoing call to batter down (or sidestep) the gates. Reread it and live it, you. If you're besieged, find your allies. Tunnel out.

As for me, my plan's to get medieval. I have material from my November talks that wants to see you. Some of this, like what follows, belongs to my book, but just not in the frozen, published form. If, like Wordsworth or Langland or Gerald of Wales, I could keep tweaking my texts, this bit, on Yvain's Wild Herdsman, would be in the book, sometime. As it stands, the blog serves, and I only wish I'd done the following (which I'm now recommending to anyone about to publish a book): end the acknowledgments with "Occasional Updates to this Book may be found online at the following url." Next time, next time, next time. Let's end the pretense of conclusion.

My book deals with the Herdsman on pages 151-62. There, drawing on Judith Butler's last fews years of work, I argue that the meeting between the monstrous Herdsman and Calogrenant in a forest clearing is not simply a meeting between culture and nature, as it's normally been understood, but rather a kind of witnessing to the violent emergence of the human from the animal. The Herdsman is human, as he claims, because he is lord of his beasts, and he is lord of his beasts not only because he beats them, but also because he hears their pleas for mercy as only imitative of proper--which is to say, human--cries for mercy. Calogrenant, at first terrified by the Herdsman, then asks the Herdsman to direct him to a wonder. He's thus ceased to recognize the Herdsman as wonderful, which is to say, he sees him now as a fellow human. Calogrenant becomes complicit in the Herdsman's humanity. Of course, human emergence doesn't work perfectly: after all, the Herdsman's face is a mess of beastly forms. We see, then, both the violent emergence of the human and the evidence that such emergence can only ever be partial.

But I could have done more. It's hard to determine what kinds of animals the Herdsman herds. Calogrenant says that he saw him herding "tors sauvages et esperars" [278; wild, excited bulls]; that's David Hult's solution to a difficult line, drawing from BN fr. 1433 and, also, Vatican, Regina 1725 ("torz sauvages et espaarz").

(key line from BN fr. 794, via here)
Espars is a hapax, found only here and nowhere else in the Old French corpus, and it's of uncertain meaning. Scribal confusion may have muddled the line from very early on in the romance's history. Another manuscript (see above) speaks of “tors salvages ors et lieparz,” wild bulls, bears, and leopards (see also BN fr. 1450, "et tors savages et lupart"), while another subtracts the bulls and has, instead, three wild bears, and one leopard ("trois ors sauvages et .i. liepart" (BN fr. 12560)).

Medieval translations of Yvain—into Norwegian and Swedish, Middle High German, and Middle English—have their Herdsman guarding, depending on the translation, lions, leopards, and bears, stags and deer, serpents, dragons, and, in Hartmann von Aue's Iwein, “all kinds of beasts that had ever been named to me” (405-6; aller der tiere hande / die man mir ie genande"--from here; trans. from here), but particularly bison and aurochs. Because Chrétien's romance nowhere else speaks of the Herdsman as overseeing anything but bulls (see lines 285, 345, 706, and 792), editors have tended to brush aside these other animals and to take the hapax “espars” as an adjective describing the bulls as “roaming” or “lively.” Problem solved, but not without some editorial creativity.

I prefer to keep the Herdsman's menagerie uncorrected, even if the leopards and other animals are just the fault of later embellishments or sloppy medieval solutions to a corrupt or obscure line. I prefer to think, at least, that later scribes saw an opportunity here, not only to increase the wonder of the episode, but also to say more about the Herdsman's immersion and subsequent emergence from animality, and as well, to say more about the auto-humanizing effects of the Herdsman's brutalization of his charges. The Herdsman beats his animals and doesn't listen to them; he and Calogrenant mark the animals' vulnerability as their proper lot rather than as an injustice to be rectified; in so doing, they confine all these critters, in all their heterogeneity, into the disdained and homogeneous category of animal.

Now, it would be one thing for the Herdsman to animalize only one kind of critter, bulls for example. Bulls like humans are their own species, so a binary of bulls and humans works well enough. But it's another thing, far taxonomically sloppier, to take bulls, lions, bears, leopards, serpents, dragons, stags, and deer, and, heedless of their particular differences, to treat all these critters collectively as one thing, animals, collectively distinct from humans and collectively like each other. Depending on the version of the romance, the Herdsman does this to domestic critters, wild ones, fabulous ones, critters mundanely familiar to Northern Europe and others known only from bestiaries, scripture, encyclopedia, or romance. In Hartmann von Aue, the Herdsman does this, as hard as it is to imagine, to all animals. All of them, whether bulls, leopards, or dragons, become one thing, banished to the other side of the binary in the Herdsman's declaration “thus I am the lord of my beasts” (353; "ainsi sui de mes bestes sire"). In sum, if we don't go along with the editorial correction, if we accept the heterogeneous menagerie, we can much more clearly discern the homogenizing invention of the category of animal.

Derrida can help clarify what happens here [and those who know his work on animals will have seen this coming]. In his lectures on animals—classic and indispensable for critical animal studies—Derrida asked his audience to hear l'animot whenever he said les animaux, animals. L'animot puns on the homonymic mot, or word, in the plural maux-ending, and might be translated as “animals-animalword.” Its jarring solecism of a singular pronoun used with a plural-sounding word aims at least to unsettle humans by reminding them of the bêtise, the animal stupidity, of classifying all nonhuman critters, no matter how disparate, into the homogeneous category “animal.” Through Derrida's coinage, animals might be understood, as Matthew Calarco glossed the word, “in their plural singularity rather than their generality.” Hearing l'animot rather than les animaux means refusing to allow nonhuman animals to be neatly collected as animals, all like each other in their nonhumanity. Refusing the category of animals would at least frustrate human self-certainty by transforming the hierarchical and anthropocentric binary of human and animal into an acentric meshwork of relations in which humans would be one node or intersection among many.

Here in the forest clearing, the essars, we have only a newly born community of two humans and a disparate crowd of beasts forcibly conjoined into a singular mass. Nonetheless the tiny circle occupied by humans has not quite been freed of animals: recall the Herdsman's face, the mingled horse, elephant, owl, cat, wolf, and boar that, at first glance, look out mutely at the knight. Stuck with his face, the Herdsman doesn't ever fully emerge from animality. Like us, he remains one of them, whatever his efforts. If this is forgivable in 2011 [make that 2012!], I want to call him the Herds/Man, with a slash between Herds and Man, for in this space of sylvan emergence, the Herdsman never quite arrives at being singularly human. He may deny his beasts a face, but he can't lose his own. His own face dispossesses him. He can't make his face one.
Posted by Unknown at 11:08 AM

I am going to steal your updates idea: since I have used this blog to compose this book, why not employ it to give the work an afterlife?

Then again I am already so tired of the lithic that I have been spotted around DC kicking random pebbles from my path while cursing.

I love what you've done with the Herdsman's herd, the composition of which I'd never thought much about previously. Invoking Derrida's l'animot is especially apt, considering that he glosses the term via the ultimate composite creature, the chimera:

"Ecce animot. Neither a species nor a gender nor an individual, it is an irreducible living multiplicity of mortals, and rather than a double clone or a portmanteau word, a sort of monstrous hybrid, a chimera waiting to be put to death by its Bellerophon ... monstrousness derived precisely from the multiplicity of the animot in it (head and chest of a lion, entrails of a goat, tail of a dragon).”

Add a leopard and an auroch and you are good to go.