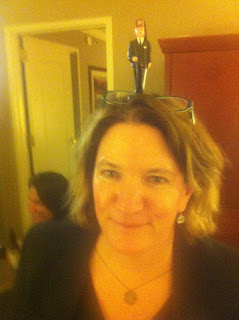 The 47th International Congress on Medieval Studies has come and gone, and I'm only now feeling like I've made dent on the sleep deficit I incurred. Maybe it was the quality of the sessions, or the fact that the temperatures never hit the 80s and rendered the dorm lounges we use as presentation spaces saunas. Perhaps the lifting of some of the gloom that haunted the last Kzoo contributed, since last year all many of us could speak about was austerity and crisis (not that those things have passed). Maybe it was all the music. Or the collaborations like Exemplaria-BABEL-GW MEMSI. Or the fact that Karl is in Paris. No matter what alchemy catalyzed this goodness, though, 2012 was my favorite Kalamazoo to date.

I wish I had time for a full and reflective post, but I've been slammed by Prismatic essays and unanswered emails and receipts to file and an institute's budget to close out. So, some verbal snapshots and bullet points.
There is much more to say, but I have run out of time. So I will ask you: what did you like best about Kalamazoo this year? What are your fond memories? What did you learn?
Posted by Jeffrey Cohen at 10:16 AM

Thanks for your kind mention, Jeffrey. Of course, the Material Collective is deeply indebted to what you and your co-conspirators have built with BABEL, which has provided a setting for us to connect with each other and a model for how to think about this kind of adventure. So thanks doubly for that!

Thanks so much for your kind mention, Jeffrey. The Material Collective is deeply indebted to what you and your con-conspirators have built with BABEL, which has provided a setting for us to find each other, and also a model for how to embark on this kind of adventure. So thanks doubly for that!

A small note: I wish the "Fuck" panels and the manifesto panel hadn't had Q&A, but instead had become spaces for longer versions of the sort of clustering conversations that often happen after panels. (The "Ecologies" panel could have had a much longer Q&A, however, especially since the moderator seemed to be looking for ways to start fights among the panelists.)

Otherwise: I'm incredibly happy that all this could happen. Those who worked to make it happen, thanks.

It was awesome, and just as you say--great to have this memoir of what was a great meeting.

Thanks for the welcome and the music both. And most of all for the ideas and the platforms to share them.

I thoroughly enjoyed your quips about SAA, even though I also thoroughly enjoyed the conference itself. As one who straddles both periods, my game plan usually is that when I'm among medievalists, I say I'm an early modernist ("Oh, so you study Shakespeare..."), and when I'm among early modernists, I say I'm a medievalist ("Oh, so you study the Dark Ages..."). Either way, no one expects too much of me ;).