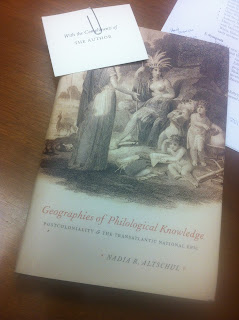 While I have a moment, I want to bring to your attention a volume that Nadia R. Altschul sent me recently: her intriguing new book Geographies of Philological Knowledge: Postcoloniality and the Transatlantic National Epic. By tracing the movement of nineteenth-century German philological inquiry to Spain and then Hispanic America, she reveals the interrelation of medievalism and colonialism. The book's focus is Andrés Bello, a Creole (in the sense that Joseph Bédier was Creole; see Michelle Warren's excellent book on that subject) Venezualan scholar whose work was essential to the Poem of the Cid becoming Spain's national epic.

You can see already the complicated layers of postcoloniality, hybridity, nationalism, internalized colonialism (especially in the process of intellectual formation), Europeanization, and dreaming the Middle Ages that Altschul is investigating. I haven't had the time to read the book carefully yet, but I am very much looking forward to spending some time with it this summer. I know many readers of ITM will want to read Geographies of Philological Knowledge as well. We've mentioned Altschul's work on this blog in the past (here and here): she is quite an insightful scholar of the postcolonial Middle Ages.


Geographies of Philological Knowledge examines the relationship between medievalism and colonialism in the nineteenth-century Hispanic American context through the striking case of the Creole Andrés Bello (1781–1865), a Venezuelan grammarian, editor, legal scholar, and politician, and his lifelong philological work on the medieval heroic narrative that would later become Spain’s national epic, the Poem of the Cid. Nadia R. Altschul combs Bello’s study of the poem and finds throughout it evidence of a “coloniality of knowledge.”

Altschul  reveals how, during the nineteenth century, the framework for philological scholarship established in and for core European nations—France, England, and especially Germany—was exported to Spain and Hispanic America as the proper way of doing medieval studies. She argues that the global designs of European philological scholarship are conspicuous in the domain of disciplinary historiography, especially when examining the local history of a Creole Hispanic American like Bello, who is neither fully European nor fully alien to European culture. Altschul likewise highlights Hispanic America’s intellectual internalization of coloniality and its understanding of itself as an extension of Europe.

A timely example of interdisciplinary history, interconnected history, and transnational study, Geographies of Philological Knowledge breaks with previous nationalist and colonialist histories and thus forges a new path for the future of medieval studies.

Posted by Jeffrey Cohen at 8:21 AM