Below you will find version three of a project that has been with me for quite some time, investigating the overlap among zombies, ecotheory and object oriented philosophy.

A pop culture oriented version will appear next year in the Journal of the Fantastic in the Arts (it was my Guest Scolar lecture at ICFA). The redaction below is substantially different, containing an extended meditation on color and ecology and a rather more theoretical framing. I composed the talk that became this essay for the Sensualising Deformity conference in Edinburgh (yes, I did more than contemplate rocks there). After some editing (it is too long), "Grey" will appear in a collection I'm putting together for the University of Minnesota Press, Prismatic Ecologies: Ecotheory Beyond Green.

Let me know what you think.

I spent an afternoon in a silver grey wood, a dead wood on the banks of the Mississippi. Its lunar atmosphere a premonition. Nature morte. Lunatic. What colour is the hole in the ozone layer? A grey area?
Derek Jarman, Chroma 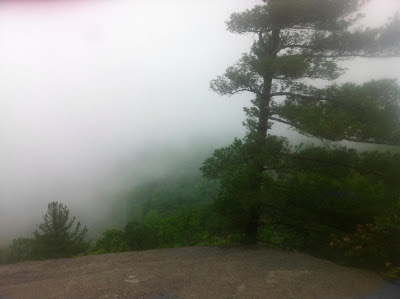 
Epigraph taken from Derek Jarman, Chroma: A Book of Color (Minneapolis: University of Minnesota Press, 2010). I would like to thank the audiences in Orlando and Edinburgh who gave me valuable feedback on this essay, as well as China Miéville and Kamillea Aghtan for their critical responses.
[1] I will quietly argue throughout this essay that a grey ecology is consonant with scholarly work being conducted under the rubrics “object oriented” and “flat” ontology, and cannot exclude a consideration of ethics, especially in the form of environmental justice. Profoundly helpful in framing this invesitigation have been Stacy Alaimo, Bodily Natures: Science, Environment and the Material Self (Bloomington: Indiana University Press, 2010) and Jane Bennett, Vibrant Matter: A Political Ecology of Things (Durham: Duke University Press, 2010).
[2] Ian Bogost, Alien Phenomenology, or What It’s Like to Be a Thing (Minneapolis: University of Minnesota Press, 2012) 80. On the unavoidability of anthropocentrism see also 64. Bogost’s work, like that of Graham Harman, Timothy Morton, Levi Bryant and the other writers associated with object oriented philosophy, is often carelessly accused of possessing no evident ethics or politics. Yet thickening human understanding of the inhuman world and interrogating relations to it is an ethical practice (and in the case of Morton and Bryant, one conducted within an explicitly ethical mode). See especially Tim Morton, The Ecological Thought (Cambridge: Harvard University Press, 2010) and Levi Bryant, The Democracy of Objects (Ann Arbor: Open Humanities Press, 2011). I am attempting in this essay a humane account of a subject ethically, ontologically and phenomenologically messy, as Jane Bennett accomplishes through her refusal to pathologize hoarding in her essay “Powers of the Hoard: Further Notes on Material Agency” in Animal, Vegetable, Mineral: Ethics and Objects, ed. Jeffrey Jerome Cohen (New York: Oliphaunt Books / punctum, 2012) 237-69.
[3] In writing these lines I am thinking both of Quentin Meillassoux, After Finitude: An Essay on the Necessity of Contingency (London: Continuum, 2008), especially his disruptive notion of the arche-fossil; and, conversely, Paul Virilio, Grey Ecology, trans. Drew Burk (New York: Atropos Press, 2009) about the scale and the power of finitude, as well as the necessity of rethinking progress narratives.
[4] World War Z: An Oral History of the Zombie War (New York: Random House, 2006).
[5] “The stereotypical zombie is essentially the opposite of such a ‘ghost’: it is a soulless body, rather than a disembodied soul.” In Peter Dendle, “Zombie Movies and the ‘Millennial Generation,” Better Off Dead: The Evolution of the Zombie as Post-Human, ed. Deborah Christie and Sarah Juliet Lauro (New York: Fordham University Press, 2011) 175-86, at 177. For the zombie as body without soul, see Zora Neale Hurston, Tell My Horse: Voodoo and Life in Haiti and Jamaica (New York: Harper and Row, 1938) 179.
[6] Sean O’Neil, “Visceral Love” in Aim for the Head: An Anthology of Zombie Poetry, ed. Rob ‘Ratpack Slim,’ Sturma (Long Beach, CA: Write Bloody Publishing, 2011) 46.
[7] The Zombie Survival Guide: Complete Protection from the Living Dead (New York: Three Rivers Press, 2003).
[8] James Lovelock, The Revenge of Gaia : Why the Earth Is Fighting Back - And How We Can Still Save Humanity (New York: Basic Books, 2006)
[9] Downloadable at: http://www.cdc.gov/phpr/zombies_novella.htm
[10] http://www.bt.cdc.gov/socialmedia/zombies_blog.asp
[11] The World Without Us is the title of a best selling book by Alan Weisman (NewYork: St Martin’s Press, 2007) that imagines life on the planet should its human population vanish: a delirium of buildings falling apart, forests eagerly expanding, subways aflood with cleansing water, farms that had been sustained by chemical interventions reverting to wilds, human traces reduced to thin lines in the geological strata and some lingering synthetic molecules.
[12] Kyle William Bishop, American Zombie Gothic: The Rise and Fall (and Rise) of the Walking Dead in Popular Culture (Jefferson, NC: McFarland and Company, 2010) 14.
[13] Karl Steel made that point to me via Twitter and it seems exactly right.
[14] See the multimedia spectacle of website at http://thepaleodiet.com/
[15] For the Haitian context of the zombie see Franck Degoul, “’We are the Mirror of your Fears’: Haitian Identity and Zombification,” trans. Elisabeth M. Lore inBetter off Dead: The Evolution of the Zombie as Post-Human (New York: Fordham University Press, 2011) 24-38.
[16] Specters of Marx: The State of the Debt, the Work of Mourning & the New International, trans. Peggy Kamuf (New York: Routledge, 2004) 85.
[17] Peter Dendle maps the “relationship between history’s least energetic monster and history’s most energetic generation” in “Zombie Movies and the ‘Millennial Generation.’” Quotation at 181.
[18] Lauro, Sarah Juliet and Karen Embry, “A Zombie Manifesto: The Nonhuman Condition in the Era of Advanced Capitalism,” boundary 2 (2008):88.
[19] http://doctorzamalek2.wordpress.com/2010/07/23/brief-srooo-tutorial/ A fuller discussion of OOO may be found in the second half of Harman’s recent bookPrince of Networks: Bruno Latour and Metaphysics (Melbourne: re.press, 2009) and Towards Speculative Realism: Essays and Lectures (Winchester, UK: Zero Books, 2010), as well as the collection The Speculative Turn: Continental Materialism and Realism, ed. Levi Bryant, Nick Srnicek and Graham Harman (Melbourne: re.press, 2011).
[20] Grettir’s saga, ed. Örnólfur Thorrson (Rekyavik, Mál og menning, 2004); trans. Jesse Byock, Jesse (Oxford: Oxford University Press, 2009). References by chapter number.
[21] “I liked the customs better when men were called heathens,” Glam declares, “and I want my food without tricks” (32). References to Grettir’s saga are by chapter number in Byock’s translation.
[22] “Ecophobia” is David Sobel’s coinage in Beyond Ecophobia: Reclaiming the Heart in Nature Education (Great Barrington, MA: The Orion Society, 1996).
[23] This taxonomy of bodies according to their luminescence and relation-making (a list also includes “bright”) is taken from Levi Bryant, who uses it throughout his work. For an especially lucid explication see his blog post here: http://larvalsubjects.wordpress.com/2012/04/22/a-brief-observation-on-relation-language-and-logic/
[24] “Kakosmos” is Bruno Latour’s wonderfully messy term in Politics of Nature: How to Bring the Sciences into Democracy (Cambridge: Harvard University Press, 2004) 99.

Posted by Jeffrey Cohen at 2:05 PM

I should point out how much this essay owes to friendship. So many of its observations come from the work and suggestions of friends: Alf Siewers on tree-dwelling, Alan Montroso on twilight vision, Lara Farina on fog ...

You effortlessly blend in reference to your other work even as you maintain a thematic richness that is very much on point. (E.g., on grey never forgetting, or failing to remind us, of the violent and violative importance that human communities put on boundaries; of the life of monsters and other marginals beginning to wake and walk in a zone that anthropocentrism writes off as the gloomy and to-be-lamented end. Of this place and color in the middle that defies absolute familiarity, but promises so much connection between disparate persons, places, things.)

As usual, your writing demonstrates an ethics as well as poetics of criticism; a theory as well as practice. I’d say more than glowing praise, but I’m unapologetically a fanboy.

This is magnificent. As I read, I already hear the debates my students and I will be having about agency, food, time, ethics... and I think of the grey of stone (cathedral and cromlech), the grey of those well-worn manuscript folios, the grey of some monastic cloth. Thank you so much.

Thank you Michael and Anne! When you write an essay like this you never know if you are going down some road of your own imagining that no one else cares to follow, or if something actually works as the path meanders. I appreciate your enthusiasm!

Grey is such a stony color (as you point out, Ann) -- but I didn't want to leave it to the stones alone.

Professor Cohen: Your wonderful essay put me in mind so much of Cormac McCarthy's novel The Road, which is suffused with grey from the opening page onward. I just found out that there is a new critical collection available on TR and the first essay focuses on the grey in the novel. I thought you might be interested in this so here's a link to the book of essays:
http://continuumliterarystudies.typepad.com/continuum-literary-studie/2012/06/styles-of-extinction-cormac-mccarthys-the-road.html

Wow. With its emphasis on grey as a becoming and eventuation, Chris Danta's essay looks excellent. thank you!

I don't know if you have ever run across the British comedy Shaun of the Dead but the way your piece as here ends has much to do with the way it ends, with the apocalypse averted and the remaining zombies pacified and found 'useful tasks' in society. In practical terms this seems to mean being enslaved as unpaid labour for menial tasks and I wondered when I saw it what was supposed to be funny, rather than tragic, about that. This film flirts on several occasions with the idea that some remnants of personality may remain in the zombie of a person who has been in the film as a living person too--this especially at the very end, though I won't spoil it in case you see it--and that just makes this more difficult for me. I think that the film-makers were actually trying to find a way to make 'everything OK' but I think they missed.

I'd place the film in the genre of zombie as social commentary with a few others, but Fido (http://en.wikipedia.org/wiki/Fido_%28film%29) is probably the best known -- and of course Dawn of the Dead is the trail blazer. I suppose it doesn't matter if personality inheres, in the end: these films are about zombies as transformed into compliant workers or consumers, the antithesis of a true grey ecology.

My favorite (so far) zombie-as-deliberate-political-commentary film is Les revenants, in which the returned recently dead pose a human rights/immigration/labor problem. The dead aren't hungry for brains; they're more like sleepwalkers: undirected, emotionally flat, and no one quite knows what to do with them.

I love the idea of the ecological Z. I don't think that Lauro and Embry develop the ecology of the Z to the extent that you do. The Z subverts the Great Chain of Being and reminds us that we too are food. I will be citing your paper in an article I'm writing. Thank you! Patricia Ferrer-Medina, PhD