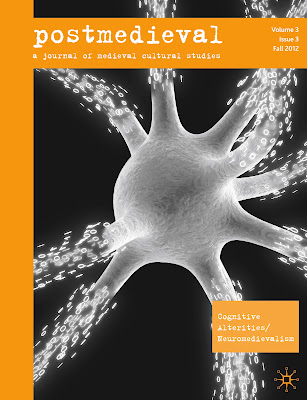 
The medieval soul, post-Aristotle and Avicenna, bears a remarkable resemblance to what neuroscientists today call the feeling brain. This anticipation of what humanists refer to as subjectivity began to take place in the thirteenth century at a time when interest in the material world and, in particular, the body – previously marginalized by Neoplatonic philosophic scholasticism and patriarchal theology – was brought into mainstream philosophy. This event occurred in part because of the reintroduction of Aristotelian empiricism and materialism into Western culture and philosophy. This reentry, during the Crusades, occasioned translations of Aristotle's De anima, De memoria and De animalium generatione from Greek into Arabic and then into Latin. Aristotelian questions about ontology so frequently centered not just on traditional concepts of human nature, specifically, the simple Platonic binary dualism of body and soul, but on the more complex issues concerning boundary transgressions of body and soul, or how body and soul interrelated as a result of phenomenology – that is, the perception of the senses.
~Jane Chance, "Cognitive Alterities"

Holly Crocker, Myra Seaman, and I are thrilled to announce the publication, in print and online, of postmedieval's special issue on Cognitive Alterities/Neuromedievalism, guest-edited by Jane Chance and Antony Passaro.

To quote a ridiculous public service advertisement from our past, This Is Your Brain:

This Is Medieval Studies:

This Is Your Brain on Medieval Studies:

From Jane Chance's "Introduction," a summary of the contents:

Reading neuroscientifically and through post-medieval analogy, the following articles on the medieval in this issue relay individual and cultural difference(s) in the creation of its visualized narratives, whether in the form of constructed alphabets and invented languages or in literature that depends on visualization and the visionary. To this end, the articles divide naturally into two main sections, the first, more theoretical and contextual, in terms of the definitions of cognitive alterities and neuromedievalism offered, and the second, more practical, literary or narrative and applied, in focus and by example.

In the theoretical section, the articles argue throughout for a specifically medieval cultural cognitive literary studies – necessarily different from that of other historical periods – while also arguing for an underlying kinship between medieval and modern perspectives. Each contextual article tackles one or more of three specific approaches to cognitive alterity. First, in terms of a specifically medieval cognitive alterity, Ashby Kinch, in ‘Re-visioning the Past: Neuromedievalism and the Neural Circuits of Vision,’ defines a medievalized approach to aesthetics on the basis of neuroscience and Theory of Mind, one that depends on visual perception and imagination and begins from the ‘intuitive hypothesis.’ Next, Matthew Boyd Goldie, resisting neuroscience's impulse toward natural essentialization, opts for a second kind of cognitive alterity, the cultural, national or ethnic. In ‘Neurobiologic Alphabets: Language Origins and the Problem of Universals,’ Goldie examines the visual process that medieval alphabets both early and late appear to trace in the brain (including those of Priscian, Isidore, Hildegard of Bingen, Giovanni Boccaccio and John Mandeville), their specific writing systems culturally differentiated from one another. Finally, Lara Farina couples the third kind of cognitive alterity, that of the individual (here, brain dysfunction), with a culturally inscribed gender difference – an essentialized marker of alterity that cuts across various cultures – in ‘“Once More With Feeling”: Tactility and Cognitive Alterity, Medieval and Modern.’ Farina demonstrates the example of phantom tactility (the sense of touch) in the abnormal sense-perceptions of twelfth-century English anchorite Christina of Markyate as represented in a hagiographical ‘case study.’ Potentially useful to modern cognitive neuroscientists, such miracles in medieval saints’ lives, if read properly, convincingly document mental dysfunctions of various types.

The second section offers four essays of narrative application: cognitive literary criticism and theory exemplifying several kinds of neuromedievalism. They include Ashby Kinch's extension of his prior theoretical article, on the role of the visual in neuromedievalism, by means of an example of ‘neuroplastic aesthetics’ in narrative: the image of the whirling, wicker House of Tidings at the end of Chaucer's allegorical dream vision The House of Fame perceived as the brain's workings or, more neuroscientifically, as an ‘echo object.’ Mayumi Taguchi then identifies late medieval Gospel meditations, particularly Nicholas Love's mystical imitation of Christ, as a meme – a cultural characteristic transmitted like a gene, comparable to the responses of the mirror neurons to the tactile and visual when an individual plays video games. Kerstin Pfeiffer discusses the intended visual effects of the performance of the Middle English Passion Play on the empathy of its audience through mirroring mechanisms. And Sara Ritchey studies the manual practices involved in the late medieval Netherlandish meditations of John Mombaer and their neuroscientific basis in imagination. All of these articles suggest that medieval cognitive applications offer modern readers and scientists narrative analogs to neuroscientific process through the visual.

At the very end, by way of response to this entire issue, neuroscientist Antony D. Passaro offers a cautionary note to humanists and medieval scholars about the applicability of using mirror neurons and neuroplasticity for literary claims, given the controversies surrounding their very concepts and the fact of neuroscience's infancy. That differences may exist among literary and cognitive theorists and neuroscientists about the science and its applications is a point made by this issue, as Paula Leverage acknowledged about it in her peer review of this issue's contents, involving a fourth, and interdisciplinary, cognitive alterity. Such expansiveness allows for Brian Stock's (2008) ‘interpretive pluralism’ in reading – a meta-theoretical insistence on an evolutionary literary studies that might embrace a reconstruction of necessary, or essential, reductionism, but optimistic in its refusal of mere reductionism in empirical approaches (and, therefore, heeding Jonathan Kramnick's ‘Against Literary Darwinism,’ 2011).

If this collection of articles from medieval studies on what Mark Johnson (1987) has called ‘the body in the mind’ can be said to advance for post-modern medievalists any of these longstanding debates, surely it does so by means of its twin emphases: first, on the individual as inhabiting multiple environments and social groups and surviving incessant change over a lifetime and, second, through the body's effect on the brain as mediated by the mind, on a consciousness of self, a personalized epistemology. About the post-human Johnson reminds us that, ‘If there is anything that survives the death of your body, it could not be the you that we know and love. For your experience is made possible by the working of your (human) brain, within the workings of your (human) body, as it engages its (human-related) environments. Any you that survived bodily death would lack your memories, your experience, your emotions, and your grasp of the meaning of things’ (Johnson, 2007, 281, 283). What this means for readers of the embodied narratives of the Middle Ages is not so much a rejection of medieval otherworldliness and abstraction but, within that very context, a reaffirmation of its insistent materialism and corporality as themselves cognitively instantiated and represented visually in its literature and art.

Access this issue online HERE. Jane Chance's Introduction is a FREE download [email me at eileenajoy@gmail.com if you have no personal or institutional subscription access, and I will send you PDFs of essays you want to read].
Posted by Eileen Joy at 12:23 PM

http://figureground.ca/interviews/eileen-a-joy/
thanks again for making these materials available and for all of your many efforts to include those of us on the other side of the paywall!
-dmf