ARGUE With This: DISSENT [postmedieval FORUM] 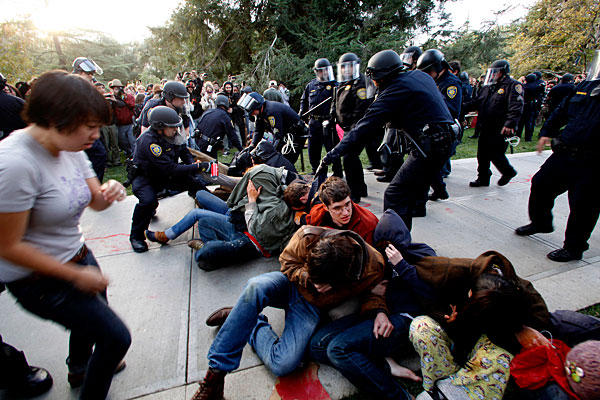 
The only thing worth globalizing is dissent. ~Arundahati Roy

With this blog post, I would like to invite everyone to start arguing with each other. All kidding aside [or not], postmedieval's online open-access "EXTRA," postmedieval FORUM, edited by Holly Crocker, has just published its third installment on DISSENT, partly undertaken as a companion of sorts to DISSENT Magazine's recent "College Issue," featuring fantastic essays on the f*^ked-up-ness and future of public higher education in America, such as Aaron Bady and Mike Konzcal's "From Master Plan to No Plan: The Slow Death of Public Higher Education" and Gabriel Winant's "Grad Students to the Barricades." As Holly writes in her Introduction, "Dissent Happens,"


It is fitting that postmedieval’s FORUM III, on the topic of “dissent,” would avoid consensus. In the contributions that follow, dissent is linked to heresy and to martyrdom, it undermines the autological subject, and it inspires intellectual creativity. It is mundane as well as impossible, a practice as much as a provocation. Dissent happens, but it is often difficult to elaborate its relation to community. In turning to the Occupy movement as a recent example, several contributors note the danger implicit within dissent, what R.D. Perry characterizes as “dissent that resists pacification and threatens to culminate in the division of a political or religious community.” In rare instances dissent can upend community, fracturing bonds between members and creating new social enclaves. . . . More often, however, it articulates an enduring commitment to shared principles of existence.

The contributors to this cluster perform a number of provocatively-imagined "dissenting" opinions and also sketch a rich history of figures and genres of dissents, from the 12th-century "heretic" Joan Warde to the 21st-century whistle-blower Private First Class Bradley Manning, from Occupy movements to schizophrenia to monastic disobedience to rhetoric to quiet [and "mundane"] acts of charity. I am personally struck by Patricia Ingham's argument that dissent is also a creative-futurist act, one in which we "wager" on "possibilities yet unseen" and which opens up new routes to creativity [i.e., dissent might be important for acts of creativity not otherwise realizable]. I was also moved [and more importantly, challenged] by Tom Prendergast's account of how a sister with schizophrenia [who is often "not herself," or is often in conflict/dissent with herself] has pushed him to let go a little of the idea that a "single [unified] self" is the basis for "acting justly" and for just politics. Further, Prendergast writes,


So how do we deal with the person whose self-dissent makes it impossible for her to consent? We could tell her that she can’t dissent from herself, but frankly that’s not very realistic. We could tell her that she’s not an individual person, but that doesn’t seem very just. We’re caught between an ideal of justice based on the possibility of dissent and an impossibility of dissent within that ideal. In my view we need one of two things — a new ideal or a new real.

What this FORUM also shows us [I think] is that while practices of dissent, if we engage in them -- whether on the page, the silicon screen, or in the streets -- is a practice of the present, and of present interventions into a Now tilted at the future, that practice is better developed with the longest possible historical perspectives. So what we HOPE is that you will read the [very] short pieces in FORUM III and dissent with us HERE [on the home-page for the FORUM is a place where everyone can leave comments and start a dialogue]. And herewith, also, the more full Table of Contents:

The Practice of Dissent
Irina Dumitrescu