The Palm at the End of Leave 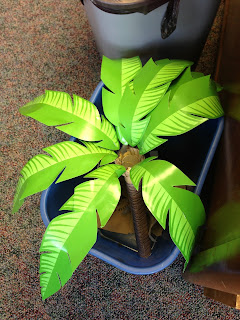 Wallace Stevens once wrote that "The palm at the end of the mind, / Beyond the last thought, rises / In the bronze distance." Stevens' palm, a symbol to scream infinity, "stands on the edge of space." You might remember that when my research leave began a long time ago I purchased a paper palm tree to annoy my colleagues. The Palm of Research Leave, unlike the Palm of Mere Being, is now in the recycling bin at my office. My time away from teaching and service has come to its end.

That was the fastest year and a half of my life. To be honest, I didn't expect to receive any fellowship support when I applied, let alone the two plus sabbatical time, so I'd already agreed to give several papers, and much of my time during leave was spent preparing for performances: BABEL Boston, Edinburgh, ICFA in Orlando, SAA Boston, a gig with Timothy Morton at EMU, Speculative Medievalisms, Feeling Stone in Melbourne. Lots of publishing projects also came due or became intense: an essay on race for a new research volume; an essay on geographesis and Chaucer for another research volume; a piece on queer stones for this (a more medieval, less Lee Edelman focused version will appear soon as well); a special issue of postmedieval on Ecomaterialism (now in proofs!); an edited collection on Prismatic Ecology (about to be in proofs), "Sublunary" as an essay (out any day now); "The Werewolf's Indifference" for SAC; my York 1190 piece; AVMEO; two essays on zombies. And, um, other stuff, like assisting with a children's book on Big Monsters. Busy stretch of time.

And yet my research leave was not funded to embark upon a thousand small projects but to complete a book with the working title "Stories of Stone" (or so said my funding applications here and here). Needless to say, it was difficult to carve out the time to work on that book. My efforts were slow -- geologic, in fact. I can name all kinds of reasons for this lack of velocity. "Busy with other projects" and "travel" would be the first things out of my mouth. But I have to admit that I also experienced something new and disconcerting with this book.

I like to write. I'm ill at ease if I do not have the chance to compose each day (and for that reason I see social media like Twitter, Facebook and blogging as a mode of writing and a chance to practice the craft rather than a waste of time: the more writing, the better, no matter the mode) (well, except for email). Working on my previous three monographs was not always a pleasure -- like all valuable things, writing is difficult, and sometimes makes you want to kill yourself -- but as I worked on these books I did not overthink their reception. I cared a bit, but I did not care all that much; it was out of my control, and too far in the future. Of course I wanted the books to be published, and of course I wanted readers to interact with them (a book wants to be read). But I was not exactly writing for an imagined audience. "Stories of Stone" is certainly a book I've wanted to write -- I would not have been working on it for six years otherwise. Yet it's the only writing project I've undertaken in which thinking about reception actually made its composition far more difficult. It seemed like the stakes had been raised by having such generous extramural research support, and each time someone told me that they were looking forward to the book its pages became more difficult to eek out. It's also my first monograph addressed to an audience beyond medieval studies (especially because my work has been so inspired by object studies and the new materialism). By the end of the first twelve months of leave all I had was very rough drafts of some chapters, and most of those were based upon already published essays. Fast forward to BABEL Boston. I loved writing that piece and collaborating with Lindy Elkins-Tanton, but I returned home to a scant few months of leave, hundreds of notes to process, stacks upon stacks of books to comb through, and a book that had no skeleton to support its weirdly amalgamated frame. That's when in a moment of crisis I took out a notebook and wrote, for a page, A Way Forward. It helped.

So from October 1 onwards I went into what I called my Hobbit Hole of Solitary Scholarship. No travel, no taking on of extra commitments (I told everyone I was writing fellowships or job letters for that the materials had to come my way by the 3rd week of September so I could clear my plate or it wasn't going to happen), no thinking about the reception of the book. Not much socializing, either. I threw myself into my work. There were days when my son would come home from school and I'd realize I'd been sitting in the same place since the morning and had forgotten to eat lunch. I'm sure the hunched posture and lack of movement have taken their toll on my body (I'm expecting that when I return to campus this week students will assume I'm an emeritus professor). But you know what? I have the entire book completed in draft. It is too long, too rambling, aggregated rather igneous -- but I have it all, six chapters plus an introduction. My mission for the first half of the spring semester is to work through what I have and make it cohere. For once it feels like this project is possible.

I return to many good things on Monday: my amazing GW colleagues and students; more MEMSI; a graduate seminar I'm very eager to teach; two search committees that will make the university a better place. I'm looking forward to it. After these months in the Hobbit Hole, I need to learn what life is like beyond a second breakfast that really consists of reading another helping of a geology book.

And also, I have three more edited collections lined up. Let the fun commence.
Posted by Jeffrey Cohen at 8:15 AM