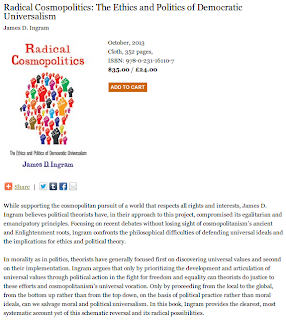 
Focusing on recent debates without losing sight of cosmopolitanism’s ancient and Enlightenment roots, Ingram confronts the philosophical difficulties of defending universal ideals and the implications for ethics and political theory.

Root Man, your root system skipped the Middle Ages. Surprise! Certainly medieval thinkers have nothing to say about individuals and universals and their importance for morality, and certainly (heads up Noah Guynn), individual cases never provided medieval legal and literary thinkers a way to rethink sedimented universals. Nope.

Still! I imagine the book's going to be useful to my dogged and/or creeping efforts to figure out the moral and political 'what comes next' of critical animal and materialist thought.

And who would buy a book with "medieval" in the copy anyhow?

Posted by medievalkarl at 8:31 AM

Ugh. Well hey, at least they bypassed the early modern period in this too!