Elizabeth of Schönau - the paths of God; also: Rabbits

Continuing to uncork my blogging. Over at Tumblr, I've been doing light blogging, sometimes, but far from always, with a medieval theme. Often I'll share a manuscript image I've discovered serendipitously while looking for something else: today, I'm sharing one here, too, because it's just too beautiful to be hidden under the Tumblr bushel.

While looking for Paris, Bibl. Sainte-Geneviève, ms. 0020, I found a manuscript of Jacques Bauchant’s French translation of the visions of Elizabeth of Schönau (Bibliothèque nationale de France, Département des Manuscrits, Français 1792, c 1370-75). It's graced with a gorgeous and strange image: 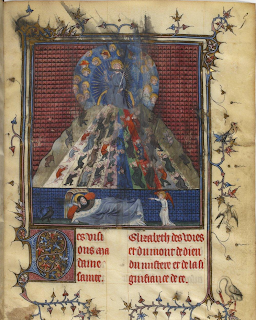 At folio 5, a sadly damaged painting, picturing the vision of St. Elizabeth: the saint lies on a bed contemplating the mountain on which the Savior is enthroned, towards which several little figures are making their way, walking on bands of different colors, symbolizing the “ways of God"

As an animals guy, I've of course primarily interested in the rabbits in their mountain warrens, even on the slope leading to God. It just isn't a proper mountain without some nonhuman life, but that inclusion, necessary as it is for realism, also muddles any lonely anthropocentric visioning. There's no world worth having without, say, rabbits and grass and little holes. There are no rabbits in the original, nor any, so far as I can tell at a quick glance, in the translation. Love it.

(incidentally, the hardest thing for me to do? not so much the blogging; rather, it's responding to comments, even brilliant ones like those gracing my post from last night)
Posted by medievalkarl at 3:19 PM

A similar image appears on fol. 83v of one of the earliest manuscripts of Elisabeth's work (Hessische Landesbibliothek Wiesbaden, Cod. 3 -- I can't seem to find an electronic version of the image right now), which was executed during her lifetime and likely with her supervision (ca. 1160 -- she died in 1164 or 1165). It shows the apocalyptic Christ standing atop a rounded mountain (rather than sitting enthroned), with the sword in his mouth and holding a key in one hand and a scepter in the other. The mountain overruns the frame at the bottom of the page (i.e. the frame at the top and sides stops about half-way down the page where the mountain overruns it, and there is no frame, line, or border at the bottom of the image), from where three different colored bands ascend to Christ's feet. At the bottom of the middle band appears Elisabeth in a semi-recumbent pose, floating in mid-air (no bed) as she gazes up at Christ. Below the image has been written the Gloria Patri, with neumes.

But Christ and Elisabeth are the only figures in that image -- no angel speaking to her, and no people or animals on the mountain or paths. Interestingly, that image also does not try in any way to separate Elisabeth into her own register: she's as much a part of the vision as are Christ, the mountain, and the ribbon-like paths.

Fantastic, thanks NC. Now my curiosity's up. Unfortunately, I wasn't able to get any closer to that ms online than you were. But for what it's worth, for E von Schönau fans, this and this look like fun.

As Barbara Newman notes in the "Preface" to the Classics of Western Spirituality translation of Elisabeth's works: "Elisabeth was among the most widely read of all medieval visionaries. Her works were studied not only in her native German, but also in France and England; individual writings were translated into French, Anglo-Norman, and Icelandic; and the Latin texts survive in at least 145 manuscripts--more than we have for the works of Hildegard of Bingen, Hadewijch of Brabant, Mechthild of Magdeburg, and Julian of Norwich combined."

And thanks for the links -- it's interesting to see the things copied with her, ranging from material on the 11,000 Virgins of Cologne (whose cult she and Hildegard of Bingen were jointly responsible for popularizing -- Hildegard wrote a whole office worth of music for them), to some Eckhart and the two Mechthilds (Hackeborn and Magdeburg).