Mirages are the Dreamers in the Drowned World: Philology and the Mirage of Time With "Philology and the Mirage of Time," edited by Michelle Warren,  postmedieval closes out its 5th year, and this special issue is really something to celebrate, as it exemplifies so well much of what the journal has hoped to accomplish, bringing together a wide range of voices from multiple disciplines, languages (Sanskrit, Arabic, Malay, English, Latin, French, Anglo-Saxon, Greek, Old Nubian, Low Greylag, Breton), and temporal periods in order to explore what Warren terms the "retro-futurism" of philology in the 21st century. And thus we have on beautiful display in this issue [as well as in so many other issues of the journal] the "productive critical tension" between past and present so central to postmedieval's mission. As Warren herself writes of how this issue evolved,

We did not set out with a coherent plan but instead put faith in the alchemy of disparate practices, and listened to the sparks fly when the pieces came together at a conference held at Dartmouth College in 2013. For the occasion, I had invited Carolyn Dinshaw and Marget Long to recreate a performance I had seen them present the year before [at BABEL's 2012 Biennale in Boston]. With a montage of medieval manuscripts, original photography and film clips, they explored various places that vanish or simply don’t exist. Their savvy troping of mirage inspired me to turn the philology project into a conference: I wanted to see what might emerge from an explicit philological framing of their visualizations of language and time. In the event, mirage solidified in my mind as a figure that shimmers in the background of each essay.

A mirage, as presented by Dinshaw and Long, illuminates philology in several ways. First, as a geophysical phenomenon, a mirage is ‘physically real, a nowhere that is somewhere’ (Dinshaw and Long, 2013). In its most common form, a mirage appears when heat causes light rays to bend, causing an image from above to appear inverted below. The turbulence of rising hot air makes the image unstable and distorted; it appears only along specific sight lines. While the image is real, it produces illusions as we try to make sense of it: the sky projected onto the ground ‘looks like’ bluish water. Mirage thus captures the nexus of reality and projection that defines interpretation. Whether at the graphic level (What is that blurry letter on the page?) or the abstract level of language systems (Is that mark a blurry letter?), philology constructs meaning out of materiality and imagination.

Since the mirage is physical, it can be photographed. (See this issue’s cover for an example.) The photograph itself adds layers of time, for it is ‘an image of the past, a record of the present, a projection of the future’ (Dinshaw and Long, 2013). This conflation of temporal referrals makes photography akin to philology, which also occupies mixed temporalities: its forms derive from some past image, fix a record of a present interpretation and project that interpretation into the future by inscribing it in some durable form. Just as photography enacts ‘the desire to fix an image for future consideration’ (Dinshaw and Long, 2013), so does philology as a practice of transcription, translation and transliteration. A mirage photo in particular functions as a ‘low res mixed reality space’ (Dinshaw and Long, 2013): like an old, smudged document, it is hard to read; it calls up our desire to interpret. As we try to establish linguistic coherence out of fragments, we might wonder if the image was ever clear in the first place. 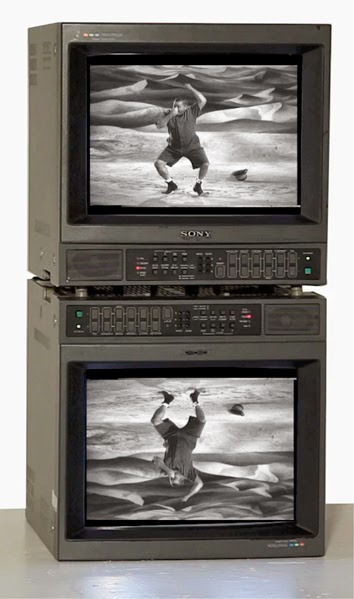 Mirage shifts to another order as a trope in fictional film, where it often functions as a synonym for fantasy -- the hyperbolic opposite of reality. These mirages capture the material fictions that haunt philology at its core. Subjectivity and desire, as the essays here show, do motivate material forms -- under the guise, though, of not motivating them. Dinshaw and Long introduced the fantasy mirage through Long’s two-channel video installation, You Were Drifting (Long, 2013). On a 25-minute loop, the piece stitches together footage from 20 films, shown on two monitors, the lower one upside down to replicate the geophysical characteristics of a mirage (See Figure 1). The upside-down images challenge legibility, just as a mirage challenges perceptions: it is difficult to focus simultaneously and equally on both monitors. Striving to see the installation as a single image, we encounter the processing effort that takes place even when we aren’t explicitly noticing. Similarly, with philology, we try to see more than one place and time but easily slip into more limited views.

The issue brings together a stunning array of articles that explore philology's multivalent and multitemporal "nowheres" that are also "somewheres," as well as what contributor Sheldon Pollock argues should be philology's three-dimensionality -- through texts and other objects as various as the novels of Joseph Conrad; the Rāmāyaṇa of Valmiki and Enlightenment philosophy; the Arabic-English Lexicon (1863–1893), a monumental dictionary of classical Arabic created by Edward William Lane (1801–1876); the history of romanized print and digital media; nonsense words in Heidigger's Metaphysics and Gerald M. Brown's study of "Old Nubian"; the role of sound in Anglo-Saxon monastic texts; Greek, Latin and French bestiaries; Roland Barthes's Society of the Friends of the Text and the short fiction of Ursula Le Guin. Herewith the full Table of Contents:

Romanization and the digital future of philology

The disturbing object of philology

A sensual philology for Anglo-Saxon England

Post-human philology and the ends of time in medieval bestiaries

Sarah Kay
Philology, or the art of befriending the text
Ika Willis

Another really exciting feature of this issue is that we used one of Marget Long's mirage studies for the cover -- (Inferior) Mirage with Dust Devil, 2013 -- and we asked Palgrave to allow us to wrap the image around the entire issue [front, back + spine], which they happily agreed to, and we think the result is stunning. Friends, the print object lives! [see above]

Here is what Marget Long wrote for us about the cover image:

I took this picture while standing in the middle of El Mirage Dry Lakebed in San Bernardino County, California. It’s a photograph of a mirage and a ‘dust devil,’ a temporary whirlwind that appeared above the mirage just as I set up my camera. Ghost on ghost. It was no accident that I was standing in that dry, ultra-flat basin. My fascination with mirages has sent me chasing them in both near- and far-flung places: the Crocker Land expedition archive at the American Museum of Natural History, Rub’ al Khali (the Empty Quarter) in the United Arab Emirates and Wendover, Utah, for a month-long, refractive experience at The Center for Land Use Interpretation.

AND SO MUCH GRATITUDE TO EVERYONE WHO HAS BEEN A PART OF THE JOURNAL THESE PAST FIVE YEARS!