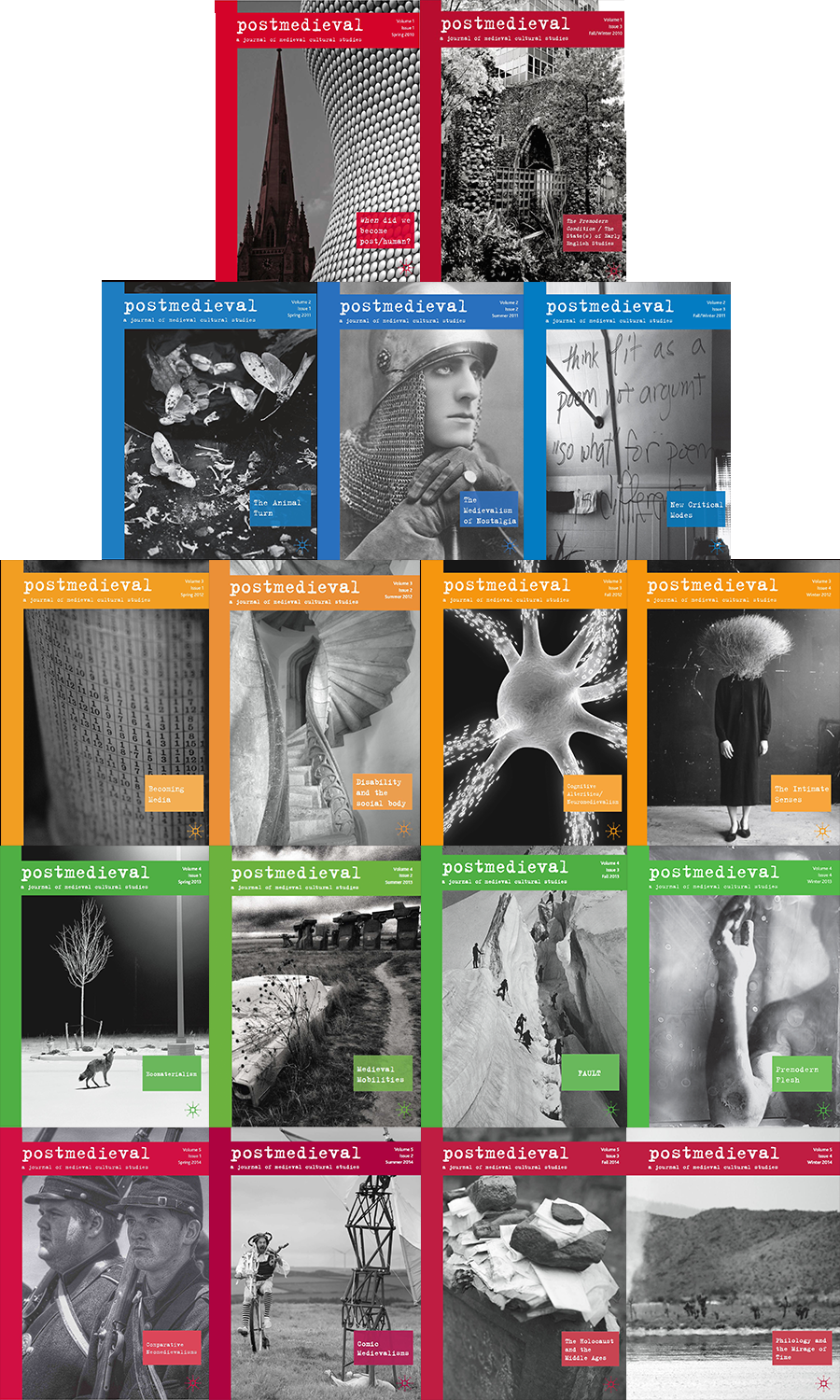 With its special issue on "Philology and the Mirage of Time," edited by Michelle Warren (which I blogged about HERE), postmedieval: a journal of medieval cultural studies completed 5 years of some of the most methodologically-innovative and forward-looking scholarship, and also, I really believe, editorial practice, in the fields of not only premodern studies, but also cultural studies more largely. In addition to the more traditional scholarly "article," we have published scholarship in the various guises and genres of prose poem, theory-fiction, "weird tale," personal journal, abcedarium, interview, short story, thought-experiment, Möbius-strip, litany, lyrical essay, roundtable, avant-garde antiphon, poetics, etc. I am really proud of everything that Myra Seaman, Holly Crocker and I have accomplished together, especially as regards our mission to put the past and present into productive critical tension (with a special emphasis on demonstrating the important value of medieval studies and the longest possible historical perspectives to the ongoing development of contemporary critical and cultural theories that remain under-historicized). And that has MAINLY been accomplished thanks to our guest editors: Craig Dionne, Karl Steel, Peggy McCracken, Helen Dell, Louise D'Arcens (twice!), Andrew Lynch, Jen Boyle, Martin Foys, Julie Singer, Jane Chance, Lara Farina, Holly Dugan, Jeffrey Cohen (twice!), Cary Howie, Lowell Duckert, Laurie Finke, Marty Shichtman, Kathleen Kelly, Anna Klosowska, Holly Crocker, Kathryn Schwarz, Daniel Lukes, Hannah Johnson, Nina Caputo, and Michelle Warren. A HUGE THANK YOU to all of them for not only putting together a remarkable array of specially-themed issues, but for also, in some cases, leaping into our editorial experiments, such as our open crowd reviews and also our online FORUM, inaugurated and edited by Holly. I am also happy that Palgrave has been willing to assist us and the journal in inaugurating and sustaining the Biennial Michael Camille Essay Prize, which allows us to foster and support earlier-career researchers.

Something which I myself would be terrified to have to write, but which we have featured in nearly every issue thus far (fifteen out of seventeen issues: a small miracle!), is the Book Review Essay, a genre we somewhat cadged from The Hedgehog Review, a public humanities journal which I have always loved, partly because each issue's contents is grouped around a pressing contemporary (yet also historical) theme and is then also accompanied by a "bibliographic essay." We thought we might try something similar at postmedieval, in which we would ask scholars to write review essays in which they might take on a group of several (3-5) titles that could be seen to be in conversation with each other as well as with the theme of a particular issue (or with a provocative theme, period), such as critical animal studies, the eastern Mediterranean, post/humanism, eco-studies, historical nostalgia, the affective turn, mobile sociology, fault/error, the material turn, mind studies, comedy, etc.

Much to my and Myra's delight, Holly Crocker agreed to take on the role of Book Reviews Editor and the results have been stupendous, with essays published by a wide variety of established scholars with significant publishing records of their own in medieval and early modern studies, who I also wish to publicly thank here, not least because reviewing is often considered as mainly uncompensated and uncounted service work, but also because in this case it resulted in an important "volume" of expert viewpoints for deftly navigating the many "states" of many "fields" with more specific analysis of particular books and why they importantly contribute to these field-states. So many THANKS, then, to Suzanne Conklin Akbari, Paul Strohm, Sarah Stanbury, Carolyn Dinshaw, Sharon Kinoshita, Juliet Fleming, Aranye Fradenburg, Clare Lees, Vin Nardizzi, Kathleen Biddick, Stephen Murphy, Glenn Burger, Nicole Sidhu, Ruth Nisse, and Seth Lerer. It is no small feat that Holly Crocker, over five years, has assembled such a cast of reviewers and has also helped to produce review essays that do not nit-pick at this or that supposed failing of a book so much as they consider the ways in which various books have contributed (both positively and negatively) to particular currents of scholarly discourses and fields as well as to certain currents of more public-intellectual thought. It was only natural, then, that Holly would also propose and go on to edit our FORUM, the journal's open-access, serial "extra" in which Holly has assembled thinkers to enter into dialogue and debate on subjects such open review, post-history, dissent, and pedagogy. BRAVO, then, to Holly Crocker, for these accomplishments, which are gifts to the field of premodern studies (and beyond), and for which both Myra and I are so very thankful and grateful. It is with some sadness, then, that I must also announce Holly's departure from postmedieval, at the end of 2015. Holly will be piloting two more FORUMS in 2015, one devoted to "The Material Turn" and another to "The Public Middle Ages," and she will continue working on Book Review Essays through the end of Volume 6. Holly's many contributions to the journal are a major reason for the journal's success. With over 3,000 fans on Facebook, over 3,600 Twitter followers, and institutional subscriptions on the rise every year, we are one of Palgrave's best-performing journals, and that's saying something for the relevancy of the premodern to the present. YEAH MAN! And also: thank you, Holly, because we could not have achieved this without you. Thanks for going on this weird adventure with us, with all of its ups and downs.

While we are sad to see Holly's departure, Myra and I are thrilled that Julie Orlemanski will be joining us as our new Book Reviews and FORUM Editor, about which both Myra and I are thrilled. Julie has already been a contributor to postmedieval, with her essay "How to Kiss a Leper" featured in a cluster of essays on "Disability and the Social Body," edited by Julie Singer in 2012, and with her essay "Speculations on a Dissenting Passion" appearing in our 2013 FORUM on Dissent. Julie has long been a vibrant and important interlocutor within the various projects of the BABEL Working Group, and along with Myra and Allan Mitchell, she organized BABEL's 2013 symposia series on Critical/Liberal/Arts, which has as one of its outcomes a special issue of postmedieval later this year that Julie, Myra and Allan are co-editing. You can read more about Julie's scholarship HERE. Again: WE ARE THRILLED.

Myra and I would also like to announce that Molly Lewis, PhD candidate in medieval and early modern studies at George Washington University, is joining us as our Editorial Assistant for the 2014-2016 term, about which we are very happy, since Molly was a student of Myra's at College of Charleston and is now working closely with faculty and other students at GWU who have played no little role in the development of BABEL, postmedieval, and punctum books. SPEAKING OF WHICH . . .

. . .  as I have been drawn more into the project of running punctum books (more than) full-time, as well as continuing to pilot (with Myra) BABEL's ever-growing enterprises, Myra and I have decided that we need to add an Editor to the journal who would split primary "chief" editorial duties with Myra while I would continue to serve as an Editor, but one whose primary focus would be on long-term issue planning, public relations, and the development + oversight of postmedieval's various innovations (such as the Crowd Reviews and whatever else we are currently dreaming up, like our "Singles" repository -- about which, hopefully more soon ... so STAY TUNED). THEREFORE . . .

. . . WE HEREBY INVITE INTERESTED PERSONS TO APPLY FOR THE POSITION OF EDITOR OF POSTMEDIEVAL, to begin as soon as is possible:

In sharing editorial duties with Myra, the new editor will --

1. serve as Lead Editor of 2 issues per year, which involves being the primary contact person for guest editors, contributors, book review essay and FORUM editor (now Holly, eventually Julie), and Palgrave representatives in order to ensure each issue stays on schedule; performing final copy-editing of edited materials submitted by guest editors of each issue (with assistance of Editorial Assistant) for submission to Palgrave by production deadline; and helping to oversee and manage crowd reviews;

2. review and correct final page-proofs of the other 2 issues each year (with assistance of Editorial Assistant), which often requires a rapid turnaround time (of a few days to a week);

3. secure reviewers for open-topic submissions and edit Online Advance Publication pieces as they are accepted for publication;

4. actively communicate with co-editors Eileen and Myra, Book Reviews and FORUM Editor (Holly, then Julie), Editorial Assistant (Mollie), and various Palgrave representatives relative to all aspects of the journal's management and editorial direction

6. regularly attend conferences at which postmedieval aims to have a regular and vibrantly-engaged presence: BABEL's Biennial Meeting, Kalamazoo Congress, New Chaucer Society, MLA, and/or others as appropriate.

The Editor will receive a small annual stipend from Palgrave and will need to work toward securing a one-course release at his or her home institution. [Nota bene: an R1 institution is no guarantee for securing course releases for editing a journal, and all institutions are fundamentally idiosyncratic on this score. Neither Myra nor I have worked at R1 institutions, although we both managed to secure course releases to edit postmedieval, whereas I know editors at R1 institutions with no support for their editorial work other than receiving credit for professional service. So this is simply a conversation one has with one's Chair and Dean.] Other than the fact that a one-course release is necessarily conducive for the success of such a co-editorship, no other restrictions apply, and persons at all stages in their careers are welcome to apply (event those who may not have an institutional, or conventionally academic "siting"). Those interested in the position should contact Myra Seaman -- seamanm@cofc.edu -- with a brief statement of interest and qualifications, plus any queries, no later than MARCH 15, 2015. 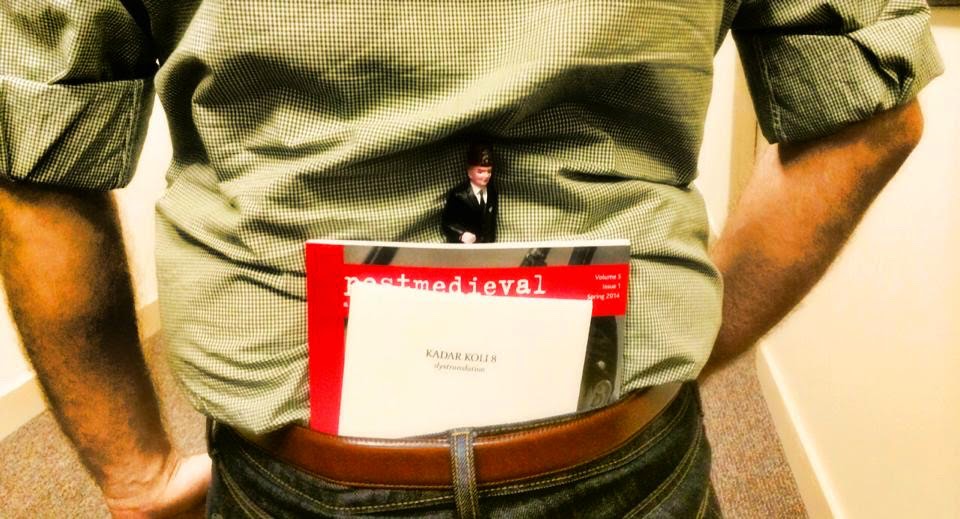