GW MEMSI, Environmental Humanities and a few thoughts about the future of the past 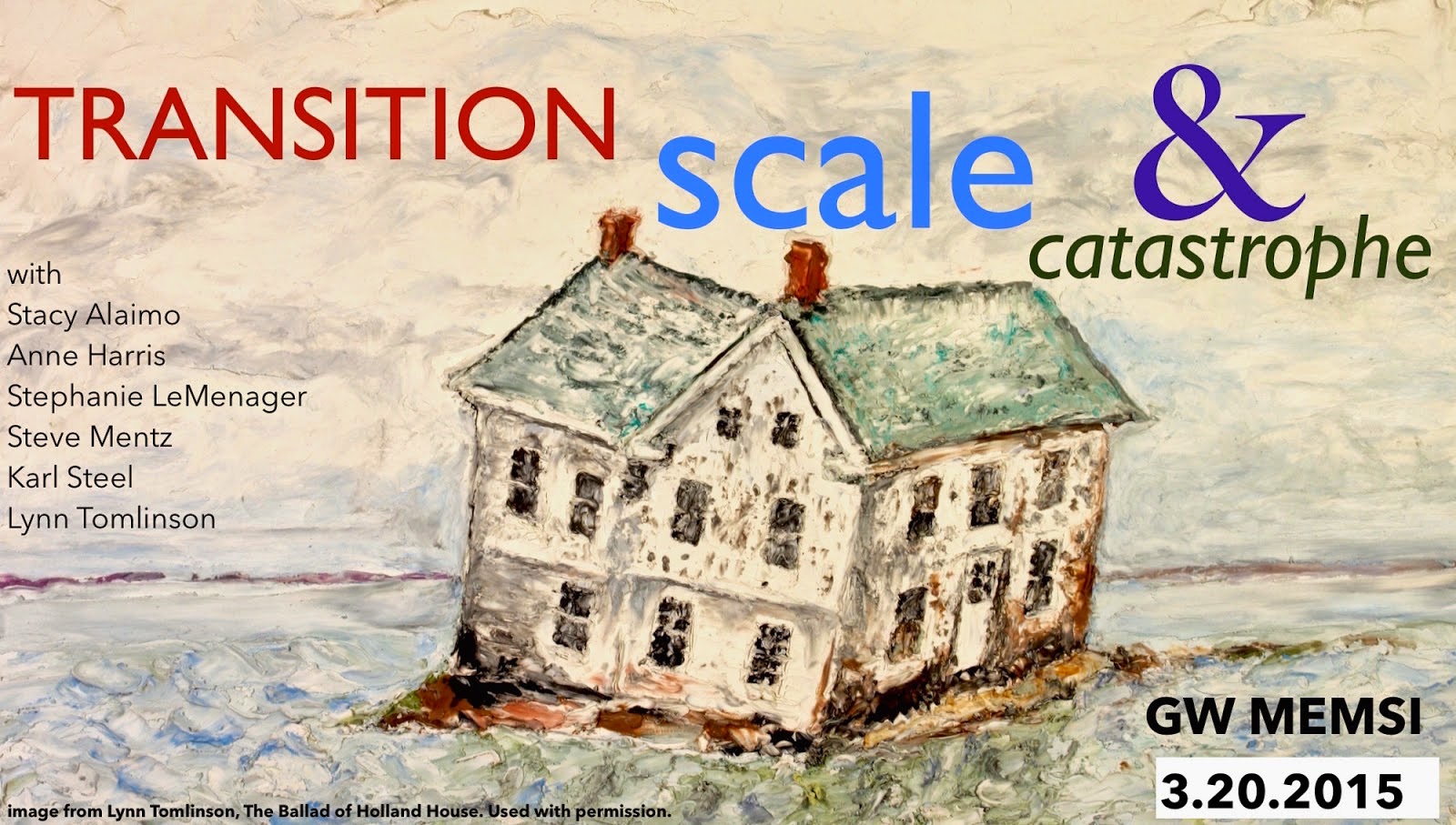 Has it been a week already? Feels like I'm just done with what turned out to be an energetic, intimate, invigorating symposium: Transition, Scale and Catastrophe, sponsored by GW MEMSI. The six presenters worked so well in their pairs, intensifying each other's presentations. Having an artist who works with environmental themes join us was catalytic to our daylong discussion of materiality, aesthetics, narrative, cataclysm, and hope. Now that the film is on the web, I highly recommend Lynn Tomlinson's beautiful Ballad of Holland Island House for your viewing: a powerful and strangely affirmative story of sea rise in the Chesapeake Bay through the point of view of a sinking house. You can find Anne Harris' elegant presentation on anamorphosis here (with many references to Lynn's film included); Anne's reflections on the symposium as a whole here (meditating on non-mimetic representations of nature); and Steve Mentz's deft gathering of the day's multiple threads here. Although it got a little blurry at the end as we closed down the Venetian Room at the Hotel Lombardy, some things that stay with me: the powerful sense of community that formed around an examination of our interwoven strands; the emphasis on materiality and aesthetics over words that continuously intruded via art; the generosity of speakers and audience; the good effect of cultivating a slow pace of discussion over the long day, so that we did not feel rushed in our thinking together; and the overflow of conversation into our meals and libations -- coffee, breakfast, communal lunch, a reception at the student art gallery (I really loved being able to show off how talented GW's undergraduate are), a dinner of shared Indian dishes, some time together afterwards unwinding. I also tried to have the catering reflect the theme, so fair trade coffee, vegetarian meals with a vegan option, and organic/eco-friendly wine at the reception. My Folger seminar Scale of Catastrophe students also enlivened the company.

Over the past seven years I've enjoyed the opportunity for interdisciplinary and trans-temporal collaboration that GW MEMSI has afforded. We gather twenty-two faculty in nine GW departments (though, admittedly, a much smaller active core). Founding and then directing the Institute has been immensely rewarding. Our mission has changed somewhat since our founding in 2008, when we focused mostly on the trans-national and the global with the time periods indicated in our name. We've become more capacious, attempting to be a major force in the humanities rather than in medieval and early modern studies (I believe that is the future of the past, as our motto goes: consistent temporal segregation is a dangerous strategy, and only a boutique institutions can support it for long). I surprised some people, though, when during the symposium I remarked informally something I thought was obvious: no later than when GW MEMSI's current funding comes to its close in spring 2018, I will resign as director of the institute. I have many colleagues who would be amazing next directors if they so choose, and ten years (!) is long enough for anyone to have been in charge of anything. There comes a point when a leader -- despite best of intentions -- is simply doing the same successful things over and again, thereby rendering them less and less successful, more and more part of a tradition that repeats simply because it is tradition to do such things. I can see the danger is already there, not just for my directing MEMSI but in every part of my career. For that reason I've taken a break from proposing conference sessions, for example (there are only so many glaciers or islands to hike with your participants before it becomes just a thing your group does), and once my last book contract for an edited collection is fulfilled (2016) I am not sure that producing more books is what I will be concentrating upon thereafter, no matter how much I enjoy the collaboration. During my stint as director I raised $335K to fund MEMSI, most of it by relentlessly hounding GW's various vice presidents, provosts, and deans, but also through writing for grants and cultivating philanthropy. That seems like a lot of money when totaled as a ten year sum but it is not all that much really as a per annum budget. It's very expensive to run even a modest gathering here in DC, where with the deep discounts we beg from local hotels we can easily pay $240 per guest per night. Add in travel, food, honoraria and ... ka-ching. A conference like AVMEO can approach $18K (and that was in 2011). I'm pretty good at budgets and find I can accomplish quite a bit with not all that much -- eg, finding the beautiful room in the library that won't charge us for using it for the day because the librarian who oversees its use is so awesome, or the gallery administered by the department with the amazing office manager who wants us to use it, or the Indian restaurant with the friendly manager who helps me plot out a dinner for 13 that won't break the bank and will feel substantial. The humanities are the best bargain going for any university. We accomplish so damn much with (compared to the sciences) so damn little. It is astonishing, really.

What wears me down, though, is the lack of staff support for the institute, and GW's perennial lack of infrastructure despite proliferating provosts and bureaucrats. MEMSI is often a volunteer affair when it comes to labor: our last symposium would not have run, for example, without graduate students helping me with the work (their reward was gratitude and dinner, but I keep thinking: is that ok?). Right now I pay an MA student an hourly wage to assist me with the minutiae of receipts, reservations, catering and email -- and she is so great, as anyone who has interacted with her knows -- but she is a student, with exams and coursework, and she has no access to things like the system through which honoraria are disbursed. The Office Manager in English, because she is my friend, helps me with many of the budget details because I cannot access GW's financial software (necessary to pay honoraria, transfer funds, and so on). She does this essentially as a volunteer, and I feel guilty about it. Her reward is a boozy and indulgent lunch we have together once a year. I pay for it from my own pocket. Don't get me wrong, I'm all about boozy and indulgent lunches shared with friends, but as I have pointed out to the financial overseer in our dean's office, shifting the responsibility for rewarding the Office Manager's efforts on the Institute's behalf to me is not the most ethical thing in the world. All of this would be OK, actually, and it does mainly work ... but what wears on me is the tremendous amount of financial paperwork required by the university. I dread the aftermath of last week's symposium. I will be allocating funds to cover the numerous charges incurred on my purchase card, attaching PDFs of receipts to each, backing up receipts with a list of every person who ate at every event, breaking down every meal and hotel stay into itemized charges, and so on. I will submit this financial report, and then it will be rejected at one or both of the two levels of administrative oversight that it must pass through. I will be chided for not following some new rule that I don't know because I am just a faculty member rather than the budget person of a department. I will resubmit my report and receipts after many phone calls of explanation and many pleas for mercy. And then next month it will begin again. I'm not exaggerating: my February report has been rejected twice and is still outstanding, mainly because I violated a policy no one told me about and bought Acela train tickets for three visiting scholars without pre-approval from a dean or vice president. Yup you read that right: dean or vice president. To buy a train ticket. I finally got through to the person rejecting the report and told him he could keep doing so but the fact is the train tickets have already been used and, um, they actually have to be paid and I cannot time travel. He made me get post-approval from the college's financial person (he called it "post pre approval") and I eventually did, though of course "post pre approval" arrived with a chiding note about how this can never happen again. Tell me about it. By the way, we are talking about a difference in price that does not amount to a very vast sum, money that I have in my budget because I am so careful. Total time Acelagate has been haunting my work and dreams: weeks, and still not resolved (but close).

For a while I have been entertaining the possibility of gathering some colleagues and proposing an ambitious new Environmental Humanities Institute at GW. I would love to expand the scope of what our humanities faculty do by working on a project that capacious and interdisciplinary. I think our students would love it, and if we offered some new courses through such an institute we could easily fill some seats in my college at a time of declining humanities enrollment. But as successful as an Environmental Humanities Institute might be -- and as attractive as such a collective undertaking is as a next project as my tenure as GW MEMSI's director starts nearing its end -- the bureaucracy of running another institute here is not something I can face at present. That's depressing.

The hermit hut calls, and I must not say no. Or so I tell myself. But then again, every promise I've ever made in the past of hermitizing has been a broken promise. So, the future is uncertain. And I am good with that.

Posted by Jeffrey Cohen at 1:48 PM